Ash Sutton produced a wet-weather masterclass to scythe from eighth on the grid to victory in the second race of the British Touring Car Championship round at Oulton Park.

Sutton had his Laser Tools Racing Infiniti Q50 up to fifth position within a couple of corners, while first-race winner Rory Butcher extended an early advantage in his Motorbase Performance Ford Focus.

On the second lap, Sutton rounded the MB Motorsport Honda Civic of Jake Hill at Cascades to take fourth, and then homed in on Dan Cammish and Colin Turkington, who were disputing second.

Turkington briefly nosed his West Surrey Racing-run BMW 330i M Sport ahead of the Team Dynamics Honda Civic of Cammish as they crossed the start-finish line at the end of the fourth lap, but Cammish, even with 48kg of success ballast, appeared to have more straight-line speed than Turkington, on 36kg, and retook the place.

As they got to the Island hairpin, Turkington and Cammish were side by side, and the lost momentum of the BMW allowed Sutton through into third, before he immediately dispatched the Honda at Lodge Corner.

Butcher was almost two seconds in front at this stage, but Sutton was lapping one second faster. Butcher was on 54kg of ballast, with Sutton on 24kg, and furthermore the Scot reckoned the conditions were more favourable to rear-wheel-drive cars such as the Infiniti.

"I set my fastest lap when he was behind me, and still he reeled me in," said Butcher. "It was just case of when, rather than how."

The 'when' happened on the eighth lap of 15: Sutton took a very wide entry line into Old Hall as Butcher defended, and then the Scot ran wide and put two wheels on the mud on the exit, allowing Sutton an easy pass. 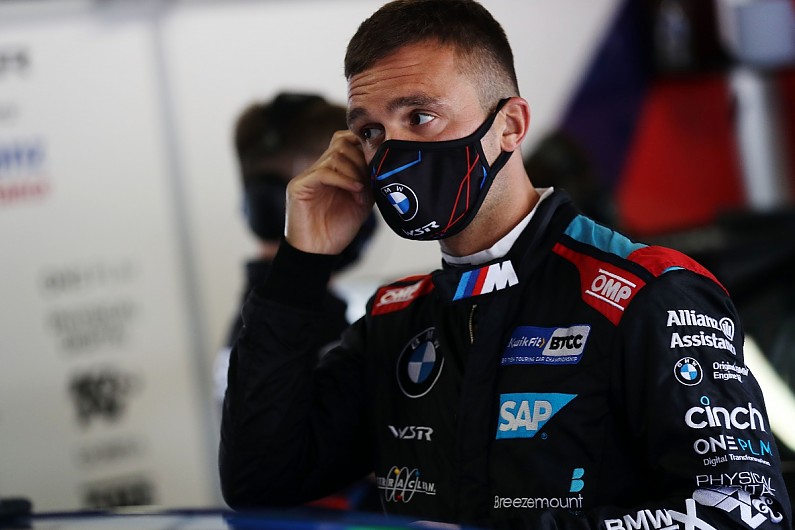 While Butcher ran a solid second to the flag, Sutton extended his margin to 4.716s.

"It was nice to give Laser Tools Racing and BMR Engineering the credit they deserve and show what the car can do," said Sutton, who was slowed in the opening race by mud in the radiator.

"Once we got the first couple of laps out of the way, I knew what we could do, and then Rory made a slight error and it made my job a bit easier."

Cammish and Turkington continued battling until lap 13, when Cammish - not for the first time - ran wide at the Island hairpin, and this time Turkington (above) was able to get down the inside for third into the Hislop's chicane.

Cammish only just held on to fourth from a fast-closing Tom Ingram, who moved his Speedworks Motorsport Toyota Corolla ahead of Hill with five laps remaining.

Hill lost another place on the final lap to the WSR BMW of Tom Oliphant, who cruised past into sixth on the exit of Cascades.

Tom Chilton was next in his BTC Racing Honda, with Adam Morgan bringing his Ciceley Motorsport Mercedes to the finish in ninth.

Bobby Thompson started the day in 27th, having not completed a timed lap in qualifying in his Trade Price Cars Racing Audi, finished race one in 14th, and got up to 10th on the opening lap of race two and stayed there.

With Sutton pulling out the number 10 in the reversed-grid draw, that puts Thompson on pole for the finale.

Josh Cook, excluded from his win in the opener, started from 27th and last with the full 60kg of ballast on his BTC Honda, and battled up to 13th.

Cook was just passing Chris Smiley for 12th on the outside into the Hislop's chicane when his BTC team-mate Michael Crees went for the inside of the Hyundai, then inadvertently punted Cook across the track and into the barrier, from where he extricated himself to finish 21st.