Josh Cook recovered from a poor start to climb from fifth to victory in a wet first race of the British Touring Car Championship round at Oulton Park.

But Cook's first success of the season for the BTC Racing team is under threat because his Honda Civic Type-R appeared to have trouble passing the post-race ride-height check in the pitlane.

From second on the grid, Cook had excess wheelspin on the slippery track, and it was polesitter Rory Butcher who led in his Motorbase Performance Ford Focus from the West Surrey Racing BMW 330i M Sport of Colin Turkington.

Cook, running with no success ballast, was able to drive around the outside of the works Team Dynamics-run Honda of Dan Cammish at the Island hairpin on the opening lap to take fourth.

Then, at the end of the second lap, Cook speared down the inside of the second BMW of Tom Oliphant, who had made a terrific start from eighth on the grid, to take third position.

On the third lap, Cook made a brave move at the ultra-fast Druids right-hander to wrest second place from Turkington.

At this point, Butcher was just over two seconds in front, but the safety car emerged because Ollie Brown had spun his Team Hard Volkswagen at Old Hall - he resumed just before the safety-car-led pack arrived on the scene, meaning the race only spent one lap under caution.

Cook was now on Butcher's tail and, one lap after the restart, he dived for the inside at Old Hall. 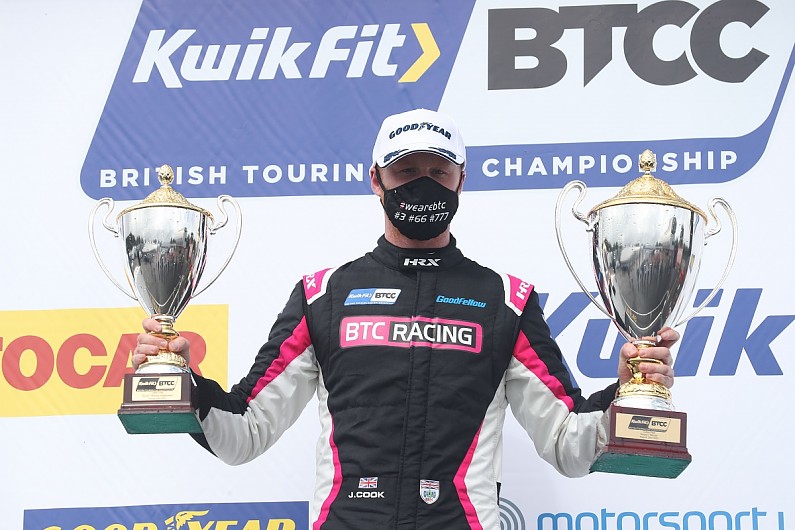 Butcher didn't make it easy, the two making minor contact as they exited the corner, but Cook was on the inside line for the following Cascades left-hander and from then on extended the gap to over 3s, although Butcher brought it down over the final three laps and was 2.079s adrift at the flag.

"I got a really good initial getaway, but got a bit excited and lit the fronts up," said Cook.

"But the guys at BTC have worked so hard on the chassis, and in these conditions it really shows.

"Rory was coming off the last corner well, but I knew the strength of my car was under braking.

"He almost got the run on me on the way out, but I just held the inside line into Cascades."

Turkington, running 60kg of ballast on the BMW, was something of a sitting duck after the restart and lost third place to Cammish.

A couple of laps later, Turkington made a small mistake at Old Hall, allowing Jake Hill (below) to accelerate past in his MB Motorsport Honda into fourth position.

Hill was close to third-placed Cammish by the finish, while Turkington claimed a solid fifth. 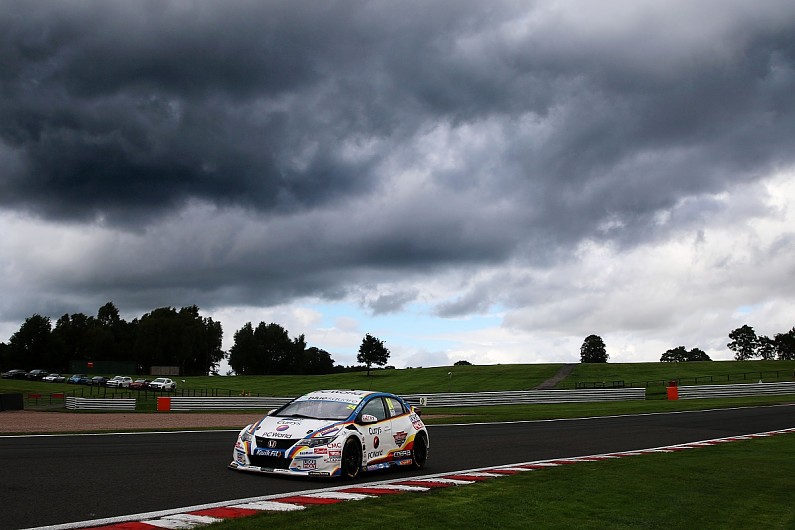 Fastest lap was set by Tom Ingram, who started the Speedworks Motorsport-run Toyota Corolla from 14th on the grid.

He was soon into the top 10, and emerged from a war with Adam Morgan (Ciceley Mercedes) and Ash Sutton (Laser Tools Infiniti) to claim seventh with a few laps remaining.

Ingram then hunted down sixth-placed Tom Chilton, but the BTC driver was able to cling on to make it four Hondas in the top six.

Morgan was eighth and Sutton ninth, while Chris Smiley completed the top 10 in his Excelr8 Motorsport Hyundai.

Matt Neal was running seventh in his Dynamics Honda when he was forced to pit due to a black-and-orange flag.

The race was delayed for half an hour because Carl Boardley stuffed his Team Hard BMW at Lodge Corner on the first of two green-flag laps, causing a long delay while the barriers were repaired.