Despite carrying 48kg of success ballast, the Scot was almost half a second clear of everyone on the first runs and just managed to keep his nose in front as most of the other leading contenders improved later in the session.

"Did I feel I could have pole? Probably not," said Motorbase Performance returnee Butcher.

"We anticipated it could be quite difficult, carrying the ballast.

"But from the first lap of free practice we came to the realisation that it was handling well - from where we started on base set-up, the car was really strong straight out of the box.

"I gave it everything on that lap and it was great, and the car was super-balanced with the weight in."

Butcher did put another set of Goodyear tyres on and attempt a second run, but did not improve.

"If I'm honest I didn't want to take too much life out of them," he said.

"I had such a gap that I was driving around in contact with the team, so if I needed to I could have gone for another flier.

"But I'd spent so much energy on that first one I don't know whether I could have done it!"

To deepen the Motorbase joy, the team's BTCC veteran Ollie Jackson briefly joined Butcher on the front row, and was only demoted by the Team Dynamics-run Honda Civic Type R of Dan Cammish.

Cammish was carrying 54kg of ballast, but has qualified on the front row for the second round in succession with a time 0.031 seconds adrift of that of Butcher, while Jackson's final qualifying position of third is by far his best in the BTCC.

Hill (below) did a subsequent lap within a tenth of pole, kicking up the dirt on the apex and exit of Sheene Curve - with the time he lost at the end of that lap costing him pole, as he had the best theoretical laptime of the session. 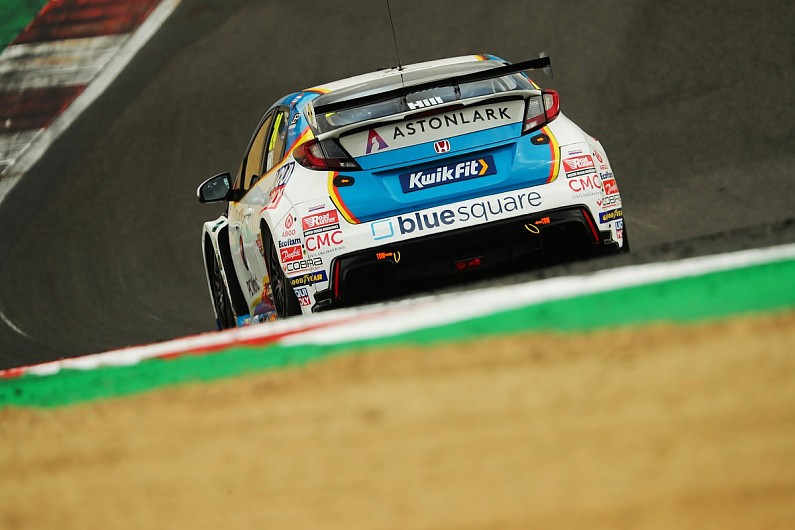 Championship leader Colin Turkington lugged his West Surrey Racing-run BMW 330i M Sport - with 60kg of ballast - to fifth spot, with team-mate Tom Oliphant equalling his time to the thousandth to share the third row.

Senna Proctor continued his competitive day with the Excelr8 Motorsport Hyundai i30 to put himself seventh, and Tom Ingram placed eighth in the Speedworks Motorsport-run Toyota Corolla.

Donington race winner Ash Sutton was a hugely spectacular 14th in the Laser Tools Racing Infiniti - having set a lap good enough for ninth, only for it to be deleted for a track-limits offence.

Michael Crees inserted his BTC Honda in between those of Cook and Chilton on the grid, but was another to lose his best lap to track limits and starts 18th.