Colin Turkington won the 2019 British Touring Car Championship in dramatic fashion from 25th on the grid after Dan Cammish crashed out with one lap remaining at Brands Hatch.

WSR BMW driver Turkington recovered 19 places to finish sixth having slipped past Cammish, who then suffered a car failure on lap 13 of 15 and span backwards into a tyre wall.

It takes Turkington equal with Andy Rouse as a four-time BTCC champion, as he won the title by two points ahead of Andrew Jordan and Cammish.

Jason Plato won the race itself, his 97th BTCC triumph.

It was Turkington's fellow BMW driver Stephen Jelley who led during the early part of the race, having made a strong launch from second on the grid to usurp polesitter Senna Proctor into Paddock Hill Bend.

But fifth-starting Plato passed Proctor for second through Surtees, then closed on Jelley and got a clean run out of Clearways to overtake down the main straight and assume the lead.

In a race uninterrupted by safety cars, Plato was at times four seconds to the good on the soft compound tyre.

He dropped back in the late stages, but sealed his win by a margin of 0.958s over Rory Butcher - who wins the Independents' drivers' crown.

Ash Sutton headed Jordan for third place after Proctor was knocked into a spin at Stirlings by Josh Cook, who eventually finished fifth.

Turkington, in sixth, blitzed 10 places on the opening lap - having been left well down the order following his race two tangle with Cammish's team-mate Matt Neal - to climb to 15th and into the points positions. 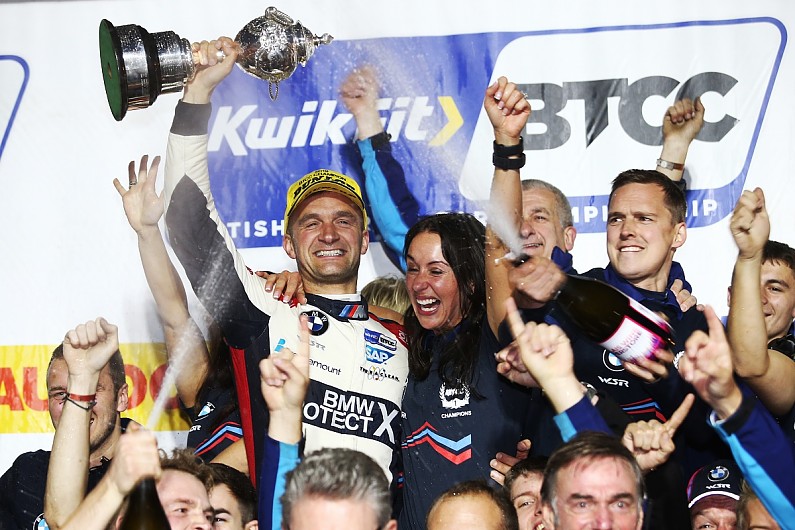 With Jelley, Proctor and Tom Chilton in trouble, Turkington soon found himself behind Tom Ingram and Cammish on the fringes of the top 10.

He outdragged Ingram on the run out of Surtees, and then dived past Cammish with the inside line into Druids.

Cammish fell prey to Adam Morgan and a recovering Jelley - having run wide at Surtees - but suffered a dramatic car failure that sent him spinning into the tyre wall and out of the race with just over a lap to go.

It marks the first time Cammish has failed to finish a race all season.

Ingram held on for seventh ahead of Jackson, Morgan and Tom Oliphant, with Mark Blundell ending his racing return season in 20th.