British Touring Car Championship driver Dan Cammish says his collisions with title rival Andrew Jordan while under safety car conditions at Silverstone was a 'farce from start to end'.

In the second race of the penultimate round of 2019, a safety car was called when Adam Morgan beached his Mercedes A-Class in the gravel on the exit of Becketts.

Jordan and Cammish raced up to the safety car line on the start/finish straight and Jordan crossed the line just 0.007s ahead of Cammish.

Neither knew who had track position and so they circulated side-by-side while the race was neutralised, before making contact on the approach to Brooklands.

Cammish told Autosport: "I feel a bit deflated, honestly. I'm actually looking forward to going home. It's one of those days when it finally came to a head.

"Desperation boiled over for a few people. It just got scrappy and messy and it wasn't a nice day.

"God knows what happened behind the safety car. I wish I could tell you.

"It was a complete farce as far as I'm concerned. From the start to the end [it] was completely ridiculous.

"As far as I was concerned, I asked the question about 10 times: 'is it my position or not?'."

Cammish climbed to third at the flag to leapfrog Jordan in the standings, with just one point splitting the pair for second place ahead of the Brands Hatch season finale.

But the Team Dynamics driver was adjudged to be at fault for the door-banging.

Cammish was fined £1500, and his licence was endorsed with three penalty points - although he escaped without a race time penalty. 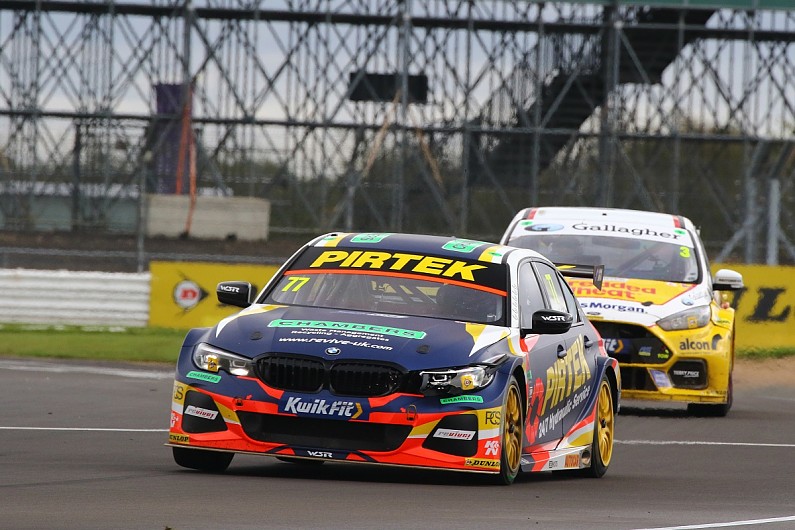 BMW 330i M Sport driver Jordan added: "I think what Cammish did was just losing his head.

"But he's set a precedent - if that's the sort of driver he is, then that's how I'll treat him at Brands. That's fine.

"You just don't do that. The funny thing is, he was in the wrong. They decided I got to the board first."

WSR team principal Dick Bennetts said that he had been unable to confirm to his driver Jordan who had been ahead at the line as his view was obscured on the pitwall.

"AJ kept asking us what's going on, but we can't see under all the flags [on the pitwall to the safety car line]," he said.

"We didn't know who was ahead. Race control should have informed us to go ahead or drop behind.

"Cammish was out of order by whacking AJ."

BTCC chief executive Alan Gow explained that a timing error had led to the confusion over positions.

He said: "They went over the line and the timing screen first came up showing Cammish went over first.

"Then, like a minute later, the timing screen got corrected and put Jordan ahead.

"But, unfortunately, [Team Dynamics] didn't notice until later on that there had been a correction."