Dan Cammish scored his and Team Dynamics' first British Touring Car Championship victory of the 2019 season in the final Thruxton race despite heavy rain late on.

Polesitter and Vauxhall Astra driver Rob Collard had led in the early part until he slid wide to allow Cammish to move clear for a 2s victory as Honda Civics completed a clean sweep of the three races this weekend at the circuit.

Like in race two, Cammish made a sluggish getaway, which allowed the third-starting BMW of Tom Oliphant to rise into second place as Collard remained unchallenged.

Light rain arrived as Cammish twice aborted manoeuvres on Collard, again on the approach to the Club chicane.

But on lap 11 of 15 - the race shortened after a clutch failure for Rory Butcher led to an aborted start - Collard slid wide on the exit of the high-speed Church right-hander.

That killed his momentum and allowed Cammish to pass for the race lead on the run to Club.

The weather deteriorated further, particularly over the first sector, with Cammish avoiding all kerbs to maintain first place in the low-grip conditions. 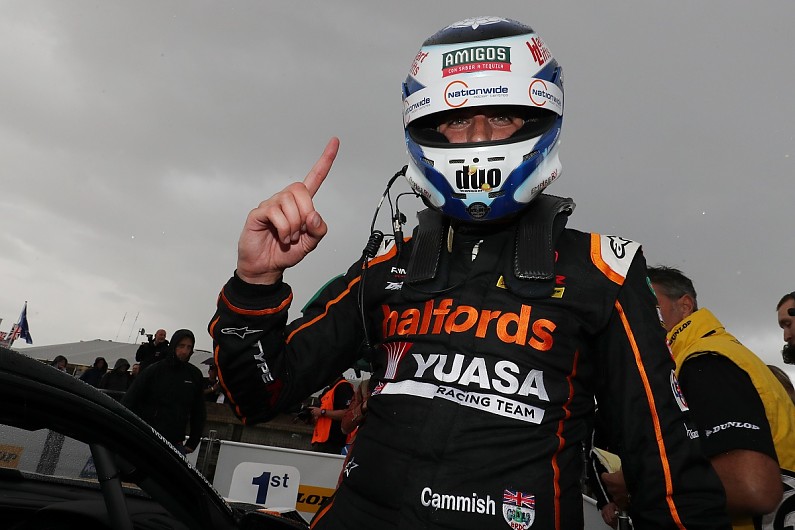 But he was close to 2s clear at the flag, scoring his third BTCC victory in the process.

Collard brought home his Power Maxed Racing car in second ahead of a double podium for Team Dynamics as Matt Neal climbed to third third.

Following a clutch failure in race two in which he finished second, Adam Morgan's hastily rebuilt Mercedes A-Class was a strong fourth ahead of a recovering Jason Plato.

Plato took 13th in race two, after his second-place start in the first race of the weekend was ruined by lining up incorrectly on the grid. That warranted a drivethrough penalty and he recovered to 17th.

The second PMR driver ran without success ballast and profited from a scrap between Ashley Sutton, Josh Cook and Tom Ingram to climb the order.

Race two victor Cook was sixth ahead of Oliphant, as Ingram eventually prevailed in his race-long duel with Sutton.

Andrew Jordan chipped away further at team-mate Colin Turkington's points lead with 10th, while race one winner Tordoff was 11th.

Turkington finished 13th, behind Jake Hill in his Audi S3.