Hearing the roar of a Formula 1 car around the Silverstone Grand Prix circuit is always special, especially for whoever is lucky enough to be behind the wheel. But for one young British driver on a cold and damp October morning, it’s truly a momentous occasion.

Zak O’Sullivan is stepping into an F1 car for the first time, but he’s cool, calm and collected – far more so than you’d expect given the nerves he must be feeling. Aged just 17, the FIA Formula 3 driver, as newly crowned GB3 champion, beat three other Brits to secure the 2021 Aston Martin Autosport BRDC Young Driver of the Year Award and, as his prize, a test in Aston Martin’s AMR21.

The Gloucestershire teenager has arrived clad in the marque’s signature green, and shows no sign of trepidation as he prepares for his first taste of F1. After taking an F3 podium at the very same circuit just a few months earlier, O’Sullivan is familiar with the layout, but not with the beast he will attempt to tame – the same Mercedes-powered car that took Sebastian Vettel to a podium at the 2021 Azerbaijan Grand Prix.

O’Sullivan is used to somewhat smaller machinery – he’s spent his F3 season with Carlin, ending the campaign 11th for the team’s best finish in the series’ modern era. But he’s riding high off the back of a post-season F3 test with long-time pacesetter Prema, which he has subsequently joined for 2023, and he’s ready for the challenge.

In preparation for his test, O’Sullivan has spent some time in Aston Martin’s simulator and had a seat fit at its nearby headquarters. But despite being a relative outsider – and a Williams Driver Academy member – he says the team is “super-welcoming, considering I’ve just kind of turned up here as my prize test”.

This is the first year the team has run the Award test, following in the footsteps of McLaren and then Aston Martin Red Bull Racing, which handled Johnathan Hoggard’s COVID-delayed 2020 run.

In damp conditions, O’Sullivan first ventures out for an installation lap on wet tyres before a further three on the same set as the track dries out. He remains calm, despite more than 48 Aston Martin team members – as well as friends, family and fellow drivers – looking on. The spectators include 2022 finalists Ollie Bearman and Luke Browning.

“Pretty crazy – it’s a different world compared to what I’m used to in F3,” is O’Sullivan’s initial reaction. “I think especially the first install lap was a big wake-up call when I first went full-throttle. I got put through the back of the chassis, basically. There are obviously a lot of areas to build on early on with the high-speed and a bit of confidence in the car. But yeah, crazy experience, easily the fastest car I’ve driven.” 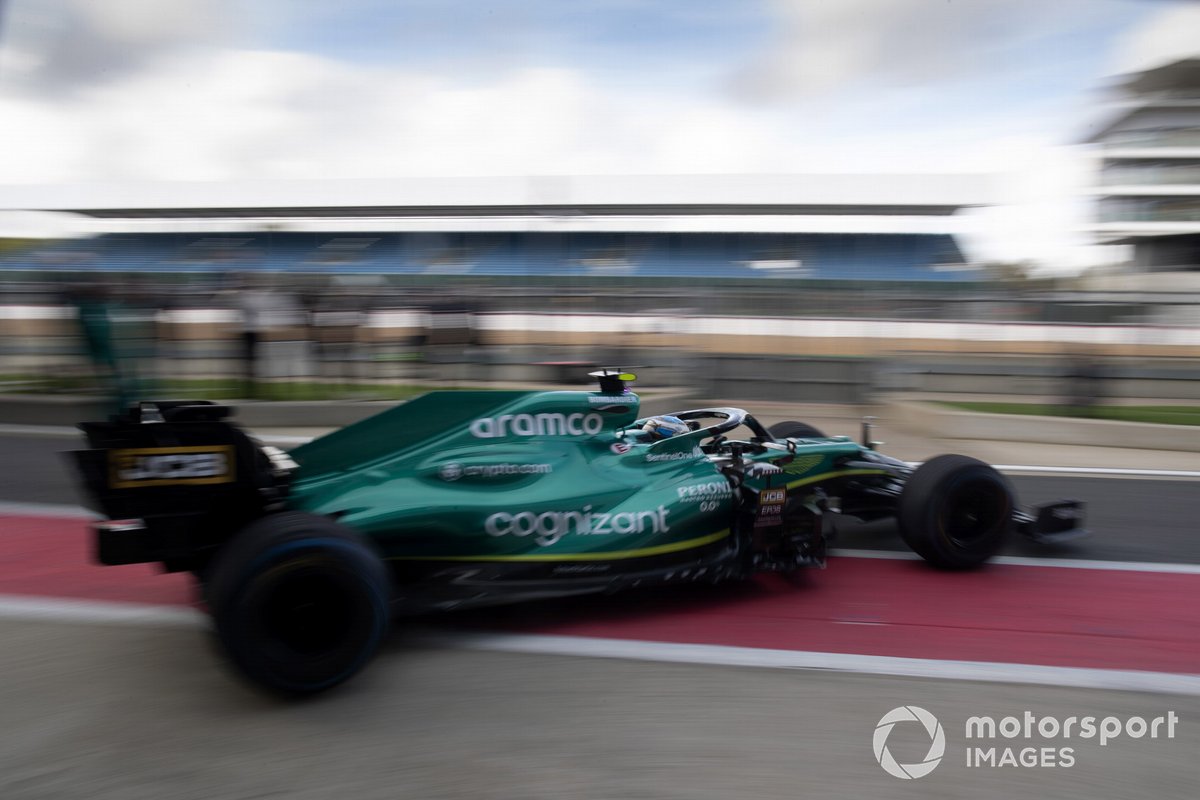 With the wet tyre runs complete, O’Sullivan swaps to the soft-compound slick tyre for his first real attack at the circuit. A five-lap run on those tyres is first up, with a brief break before heading out for another five laps. He puts in respectable times, and improves by almost 1.5 seconds across the first 10 laps.

The hard tyre comes next, and he shaves off even more time, before he finishes his day with five more laps on another set of new softs. His best lap time is almost five seconds faster than those initial tentative steps in what must be the fastest F1 car yet used for the Award prize test.

"It’s a different world. It’s going to put a new perspective on Silverstone for me – it feels a lot smaller than it did before, and I’m sure when I jump back in an F3 car it won’t feel so nice anymore, but I really enjoyed it" Zak O'Sullivan

Though the hard tyre is “more predictable”, he finds the soft better for overall lap time, as you’d expect, with a push-cool-push sequence rounding off his time in the car for a true qualifying experience, during which he finds another 1.5s. Given this is his first time in the car, O’Sullivan wouldn’t be blamed for taking things easy. But he’s pushed himself throughout, and says he’s been “nearly flat” around Copse by the end of the day.

“I think at the end I still had a bit of margin in the high-speed corners,” he adds. “I didn’t want to crash the car because they haven’t got too many bits. But the places where I wanted to be flat I was nearly flat around Copse, which was kind of my mental game at least, and obviously Turn 1 [Abbey] was all flat.

“I was trying to push the limits. I think I found the limits a bit easier in the slow-speed corners. But still, the high-speed aero corners are a big step up from what I’m used to.”

Compared to an F3 car, he says the power is “crazy,” but the balance is “a lot more predictable and stable”, given the team’s ability to make more changes. O’Sullivan points to the brakes as the main difference, getting on the anchors “15, 20 metres later than I would have in F3 and coming in 80 or 90mph faster”, though he jokes that the effect of the increased g-force on his neck is the biggest limitation: “I’m pretty sure 25 laps was enough for my neck.”

His lap times are 15 to 16 seconds a lap quicker than those of an F3 car, but O’Sullivan admits he is still “not even near the qualifying pole pace”. 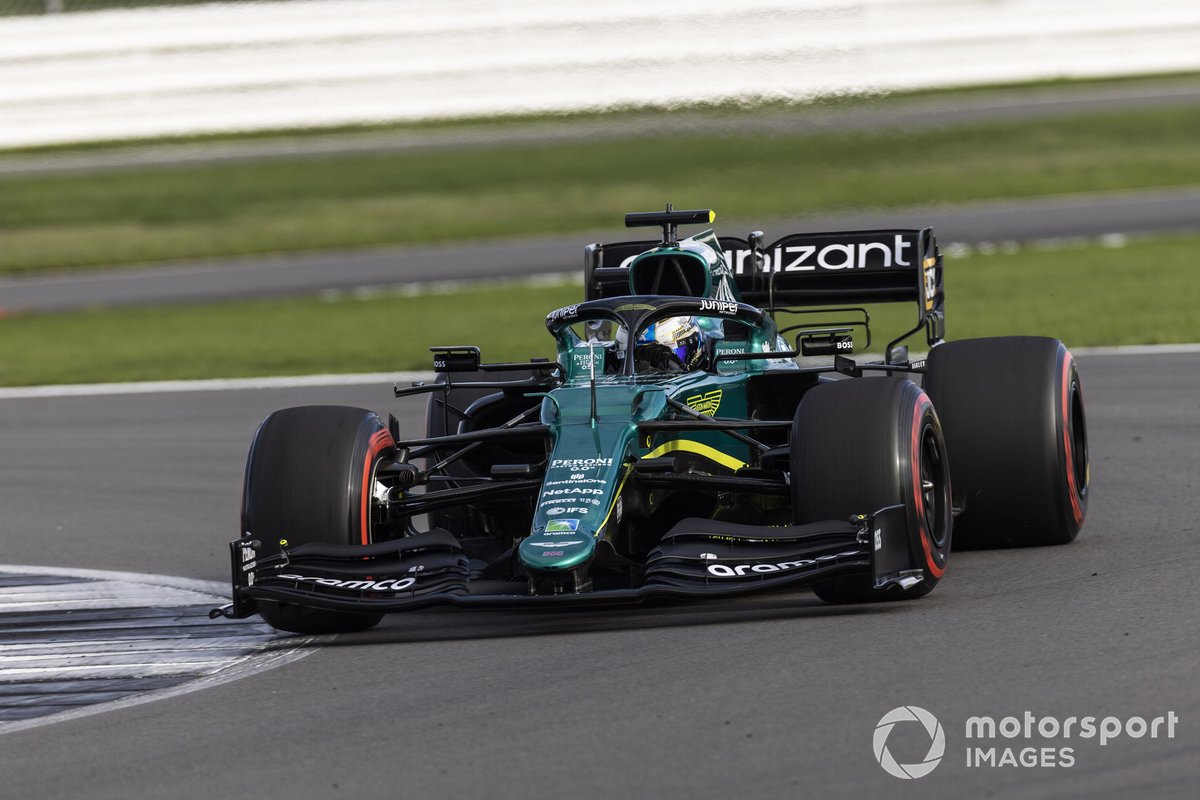 “It’s a different world,” he adds. “It’s going to put a new perspective on Silverstone for me – it feels a lot smaller than it did before, and I’m sure when I jump back in an F3 car it won’t feel so nice anymore, but I really enjoyed it.”

Enjoying a test is one thing but performing well is another – and O’Sullivan nails both counts. Mark Gray, Head of Car and Build at Aston Martin, says he has approached the test “very professionally” and “did himself proud”.

Though he initially struggles with applying enough brake pressure and has a harder time on his third run using a cold set of used slicks, Gray says confidence has improved throughout the day, with a “nice gradual decline in lap times”. With team and driver working well together, they’ve been able to make adjustments based on O’Sullivan’s feedback, which Gray says is “pretty spot on”.

“What was impressive about him, he came in quite quiet, asking the right questions,” says Gray. “He didn’t get panicked by anything, he obviously had a lot to absorb from us, and a lot going on in his own mind to drive this car. 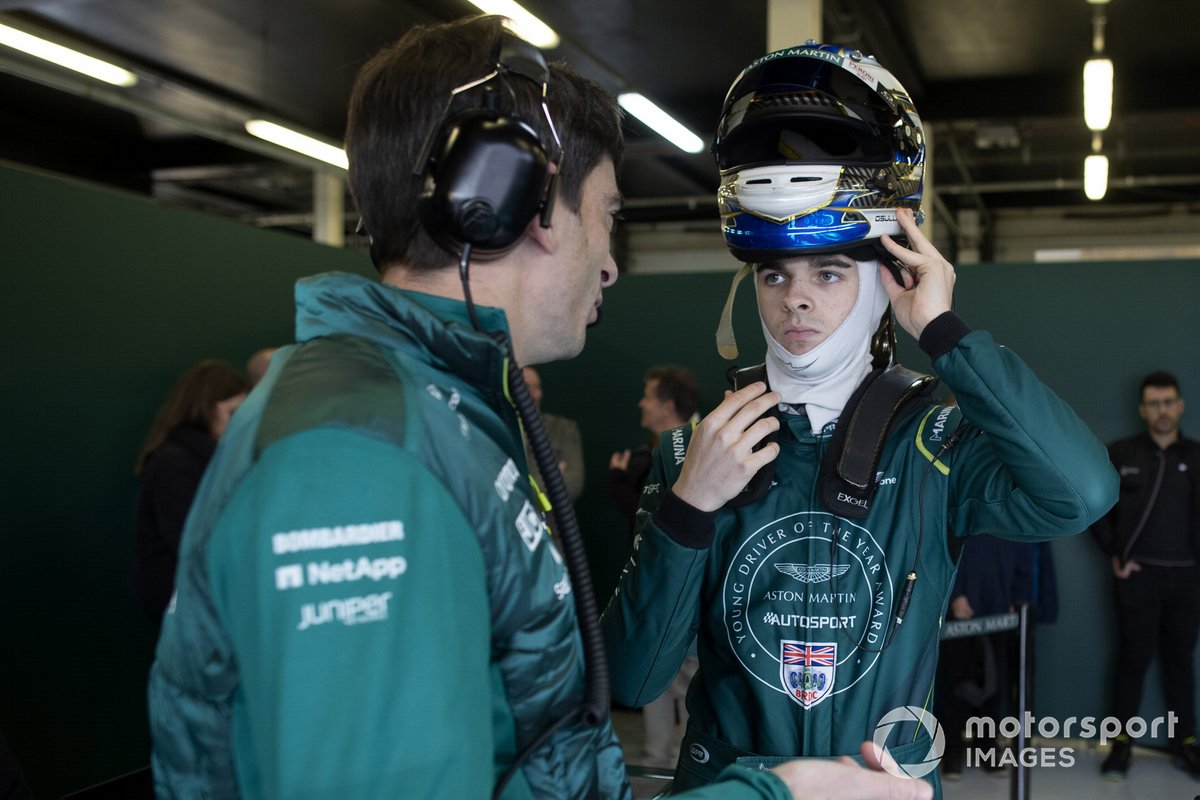 O'Sullivan impressed with his feedback and questions

Head judge Derek Warwick, who has overseen the Award’s testing process for 13 years, is also impressed by O’Sullivan. The ex-Formula 1 driver says it is “really special” to be involved in giving a young driver their first taste of F1 machinery: “It’s a very proud moment for me and all the judges and Aston Martin.”

Reflecting on O’Sullivan’s outing, Warwick says he has done an “amazing” job, following in the footsteps of the likes of George Russell and Lando Norris, Award winners in 2014 and 2016 respectively.

“He was super-quick, he was very competent,” says the 1992 world sportscar champion. “The team were super, super-impressed with him. The way he handled first of all the simulator – they gave him a run before the test so he was familiar with the steering wheel, the buttons and everything.

"He understood what was needed, he changed things as requested. He spoke very eloquently and precisely back to the team. He was superb" Derek Warwick

“They were so impressed with the way he understood the steering wheel, because it’s one of the most difficult things to get used to in a Formula 1 car nowadays. He understood what was needed, he changed things as requested. He spoke very eloquently and precisely back to the team.

“He was superb. He was calm, he was in control, he was very professional. He approached it with complete calmness, but speed as well. He looked absolutely amazing out on the circuit.”

With his first F1 test prompting glowing reviews, and a second F3 season ahead of him with Prema, O’Sullivan’s future looks very bright indeed. 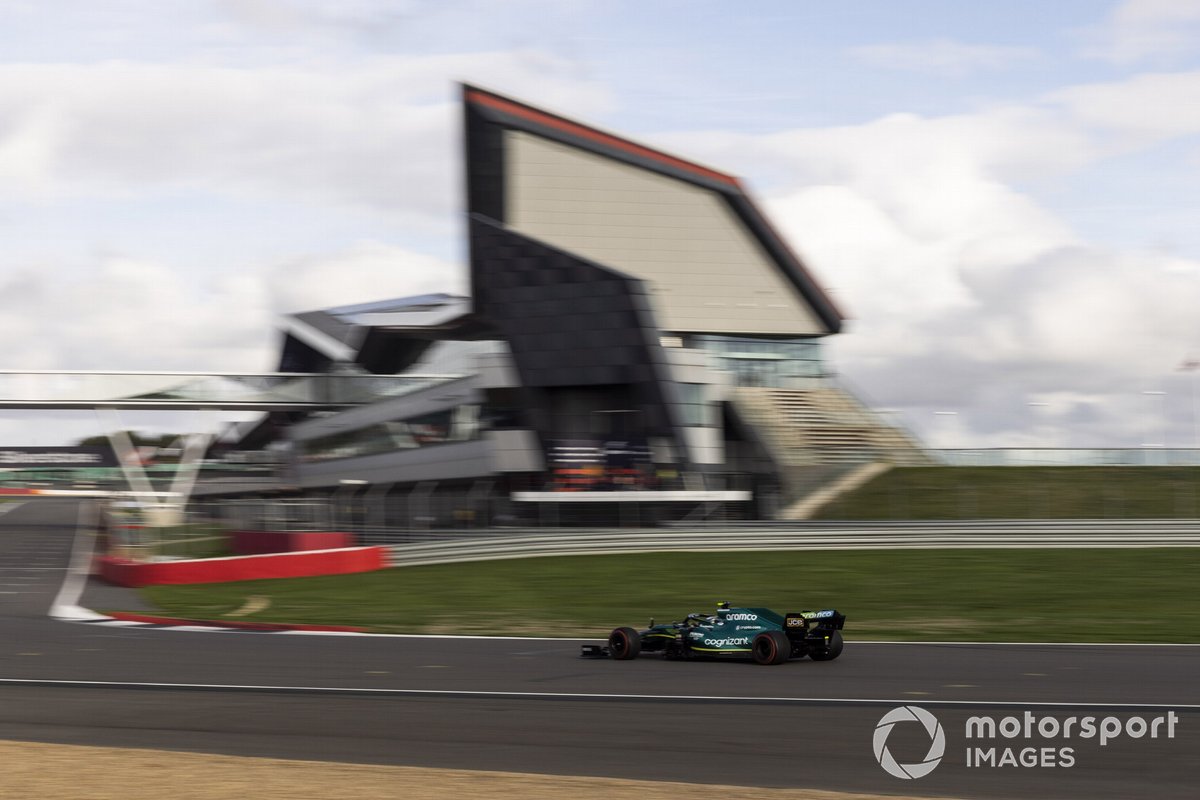 Will we see O'Sullivan in an F1 car more often before too long?

Memories of the Award boost from a champion

Thirty years after Dario Franchitti won our Award, the four-time IndyCar champion still remembers how he felt when his success was announced. The Scotsman had been nominated a year earlier, losing out to Oliver Gavin, but returned in 1992 to become the Award’s fourth winner – something he says was a “big deal” for him, and ultimately changed the course of his career.

“I remember that feeling of absolute elation when my name was called out and standing up on stage,” he says. “That was a big deal for me. I met Michael Andretti, who I ended up driving against and then with as a team-mate and a team owner. Being up on stage with Nigel Mansell, all these different people, it was a big thing for an 18-year-old kid from Scotland. The Award itself I remember the first year was a Vauxhall Lotus, I think I drove.

“I’d been racing Vauxhall Junior that year, and they put you in the next category above. Then the following year, I didn’t have a particularly great year in Vauxhall Lotus, but they put me in an F3 car at Donington Park, and I guess I got the job done.”

Franchitti subsequently joined Mercedes in the DTM after then-motorsport boss Norbert Haug called former Autosport editor Peter Foubister to ask which young British drivers he should be watching. Franchitti went on to test a McLaren MP4/10B at Jerez in the winter of 1995. Though the Formula 1 test was “massive”, he believes an added bonus of winning the Award is the connections it can give you.

“The headline figures of the Award are the F1 test and the money the drivers get, and the prestige of winning the Award. But the stuff that goes on in the back rooms, it’s those sort of connections that the judges and all the people involved in the Award, the way they can help the drivers, was really important to me,” says the triple Indy 500 winner, who is now a key figure on the judging panel. 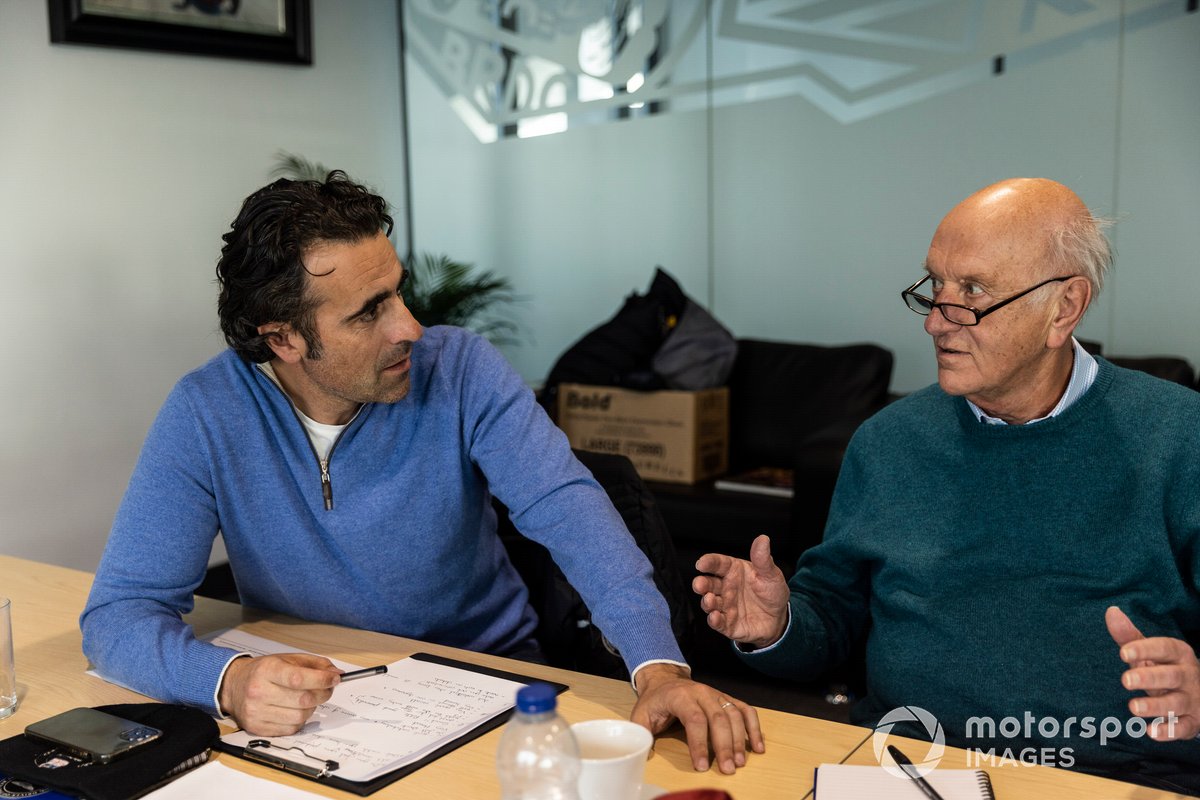 Dario Franchitti, together with fellow Award judge Ian Tichmarsh, knows all about the importance of winning the prize to a driver's career