Bjork, who secured pole in Sunday morning's qualifying session after his YMR team repaired his Hyundai i30 N overnight, held his lead at the start of the race as Gabriele Tarquini jumped team-mate Norbert Michelisz in their similar Hyundais.

The 2017 World Touring Car champion was 2.8 seconds clear at the end of the first lap and more than four ahead by the end of the second which, having pulled away further on lap three, allowed him to rejoin with a comfortable lead even after taking his joker lap.

That advantage was then wiped out when a safety car was called on lap five to allow Daniel Nagy's crashed Zengo Motorsport Cupra from the top of the hill in sector two.

Bjork quickly set about rebuilding his lead at end of lap six, but he did not establish as big a margin again over the remainder of the race - which was punctuated twice more by safety car periods.

The last of those - called when Gordon Shedden broke his WRT Audi RS3 LMS's driveshaft after striking a kerb - left only one racing lap, on which eight of the top 10 drivers were required to go through the joker lap.

That ensured Bjork was not troubled on his way to a second win of the season, beating Tarquini - who had Michelisz for close company - by 3.193s. 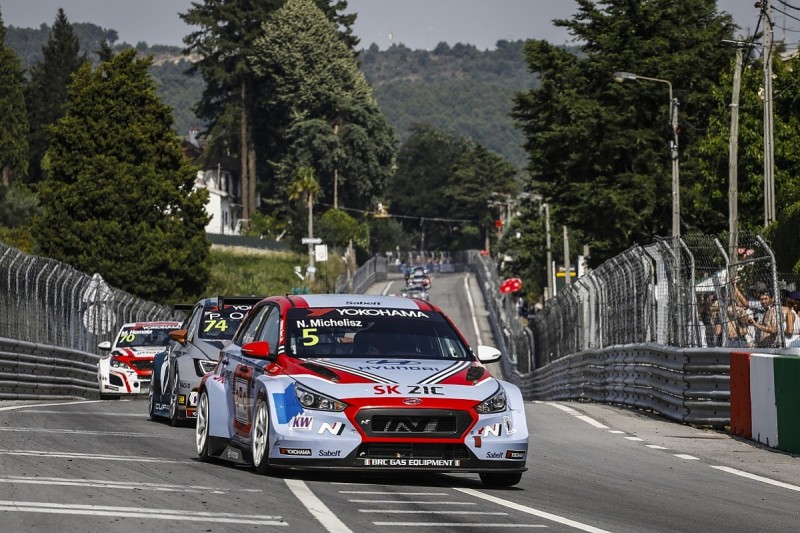 Pepe Oriola fell just short of a third podium in as many Vila Real races in his Campos Racing Cupra, having hounded Michelisz for the majority of the race.

Fresh from his first WTCR victory in the reversed-grid race, Mato Homola was the last of the drivers to complete the joker on the final lap not to lose a position, as Frederic Vervisch (Comtoyou Racing Audi) was next up having served his joker earlier on.

Yann Ehrlacher got his Munnich Motorsport Honda Civic out of the joker in front of the similar Boutsen Ginion car of Benjamin Lessennes, while Aurelien Panis and Jean-Karl Vernay completed the points.

Having attempted to pass Vernay on the final lap, Saturday race winner Yvan Muller missed out on 10th when he completed his joker at the finish.

Fabrizio Giovanardi had been on Muller's tail in 11th in the middle part of the race and chose to serve his joker to attempt to leapfrog his way into the points, but he hit a bollard on the joker lap lane entry in his Team Mulsanne Alfa Romeo and eventually stopped at the lane's exit, which necessitated the second safety car period.