Thed Bjork claimed his second win of the World Touring Car Cup weekend at Ningbo, completing a clean sweep at the Chinese circuit for the YMR Hyundai team

Having secured another qualifying pole in Sunday morning's session, Bjork was again in command at the start of the race after successfully beating the BRC Hyundai i30 Ns of Norbert Michelisz and Gabriele Tarquini off the line.

Bjork had established a comfortable 2.792-second lead over Tarquini when the race was red flagged with nine laps completed, to allow repairs to be made to kerbs at the Turn 15/16 left-right at the back end of the circuit.

With a tyre stack put in place at Turn 16, the field completed one lap behind the safety car before racing resumed on lap 11.

Bjork was quick to establish a one-second gap back to Tarquini, and eased away - with Tarquini pursued by the Comtoyou Audi RS3 LMS of Denis Dupont - to win, hoisting himself fully into title contention after team-mate Yvan Muller retired.

Muller's race was a scrappy one, but he had sat in eighth until he slowed and returned to the pits a lap before the red flag.

Tarquini had no answer to Bjork's pace, but with second has returned to the lead of the drivers' standings after his own retirement in race two allowed Muller ahead. 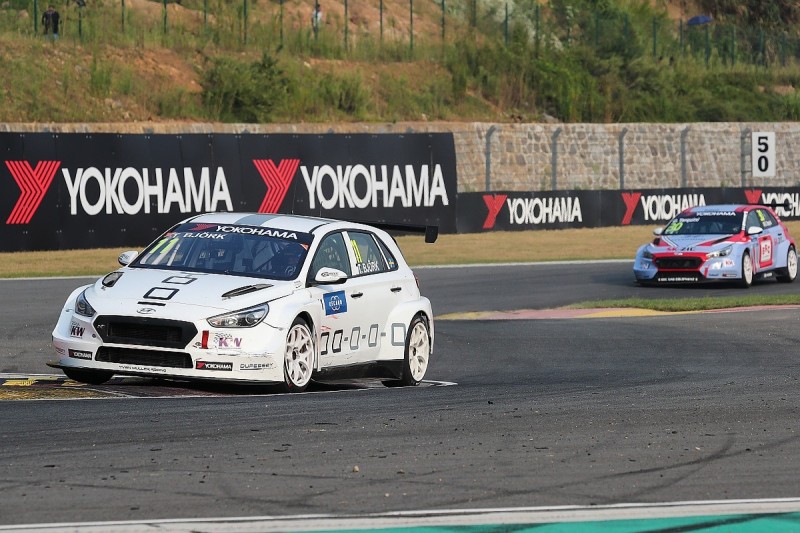 The Italian now has an eight-point advantage over Bjork - who started the weekend sixth overall - with Muller a further point further back.

Behind Tarquini, Dupont bettered the fourth place he achieved in race two to land a maiden WTCR podium, while his Comtoyou team-mate Frederic Vervisch completed two late passes after the red flag to claim fourth.

The second BRC Hyundai of Michelisz came home a subdued fifth ahead of Rob Huff, who clung on to sixth despite a train of cars breathing down the Sebastien Loeb Racing Volkswagen Golf GTI driver's neck in the closing stages.

Pepe Oriola (Campos Racing Cupra) was lead among that pack, crossing the line ahead of Nathanael Berthon - who briefly got ahead of Huff only to slide off and drop back into the pack.

Esteban Guerrieri, who had scored podiums in the weekend's first two races, passed Michelisz for second at the Turn 11 hairpin on the opening lap but made contact with the Hyundai while doing so, and slowed on the subsequent straight with a suspected suspension issue.