Four-time World Touring Car champion Muller assumed the lead at the start, beating polesitter Mehdi Bennani through the Turn 1 kink and then in the braking zone for the Turn 2 left-hander.

After surviving a tap from the Sebastien Loeb Racing Volkswagen Golf GTI of Bennani on the first lap, Muller ran untroubled over the remaining 12 laps as he stretched his Hyundai i30 N clear of the pack.

Even by backing off by two seconds on the final lap, Muller still crossed the line 2.6 seconds clear of Bennani to claim his third victory of the WTCR season.

Tarquini's retirement after completing three laps - having run in the lower reaches of the top 10 on lap one before visiting the pits - meant the power battle between the two Hyundais shifted again, with Muller now 14 points ahead of the BRC Racing driver Tarquini.

With Bennani a comfortable second, the real interest was in the battle for the final podium position behind.

Muller's nephew Yann Ehrlacher held the position for the majority of the race after retaining his third at the start, but came under increasing pressure from the Comtoyou Audi RS3 LMS of Frederic Vervisch late on. 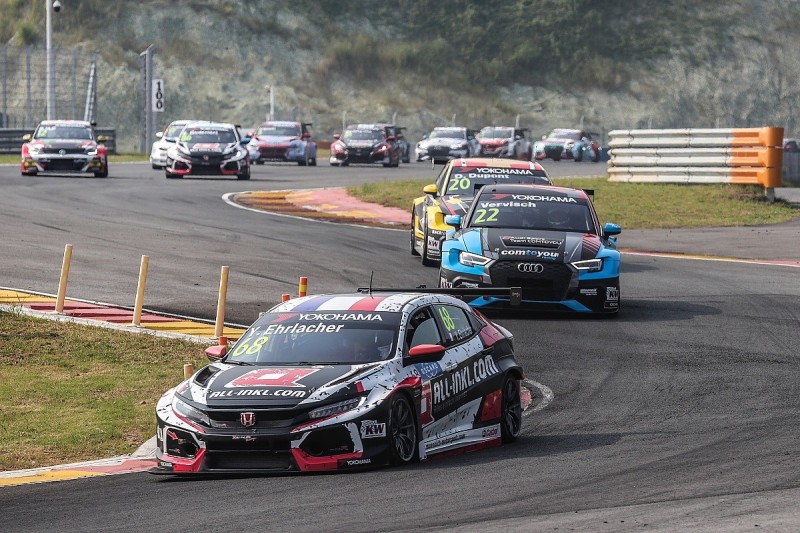 Vervisch first attempted a pass on lap 10 of the 13-lap race off Turn 2 before settling in behind the Munnich Motorsport Honda Civic, but later tried a move at the same spot on the penultimate lap.

Getting a better exit off the corner than Ehrlacher, Vervisch tried to get his Audi up the inside on the run to the Turn 3 left-hander, only for Ehrlacher to move over in defence of his position.

The pair made contact and both went off, with Vervisch dropping to seventh and Ehrlacher to 10th.

Guerrieri's run to third began when he came out on top of an entertaining tussle with Rob Huff, who ended up fifth ahead of Vervisch - who got back ahead of Muller's YMR Hyundai team-mate Thed Bjork on the final lap.

Ehrlacher's race was compounded when he was hit by Boutsen Ginion Honda debutant Ma Qing Hua on the final lap.

Ma crossed the line in 14th, while Ehrlacher was classified 18th after stopping as a result of the contact.