Vernay had earlier prevailed in a qualifying session dominated by Audis - with second-place starter and finisher Pepe Oriola the only non-Audi in the top six on the grid in his Campos Racing Cupra - and ran untroubled in the race to pull off a convincing win on the Chinese street circuit.

The 2017 TCR International Series champion made a tentative start but held the lead from Oriola, with the fast-starting Yann Ehrlacher promoted to third ahead of Shedden when Denis Dupont got into the side of Comtoyou team-mate Nathanael Berthon through the opening sequence of corners.

After a three-lap safety-car period in the first half of the race to allow debris from a crash between Tom Coronel (Boutsen Ginion Honda) and the Team Mulsanne Alfa Romeo Giulietta of Fabrizio Giovanardi to be cleared, Vernay pulled clear of Oriola - eventually winning by 4.913 seconds.

Vernay banked 27 points as a result to put himself back in with an outside shot at the title, having failed to score a point over the course of last weekend's Ningbo round.

Shedden's attempts to join the top two were frustrated in the opening half of the race, either side of the safety car, but the three-time British Touring Car champion cleared the Munnich Motorsport Honda Civic of Ehrlacher on the run to the first corner on lap 12 of 20 and set about reeling in Oriola.

The Briton fell short of catching the Cupra, finishing 0.6s behind Oriola, but he nevertheless achieved a first top-three finish since switching to the world cup for 2018 - a result that also ended a seven-race point-less run stretching back to June. 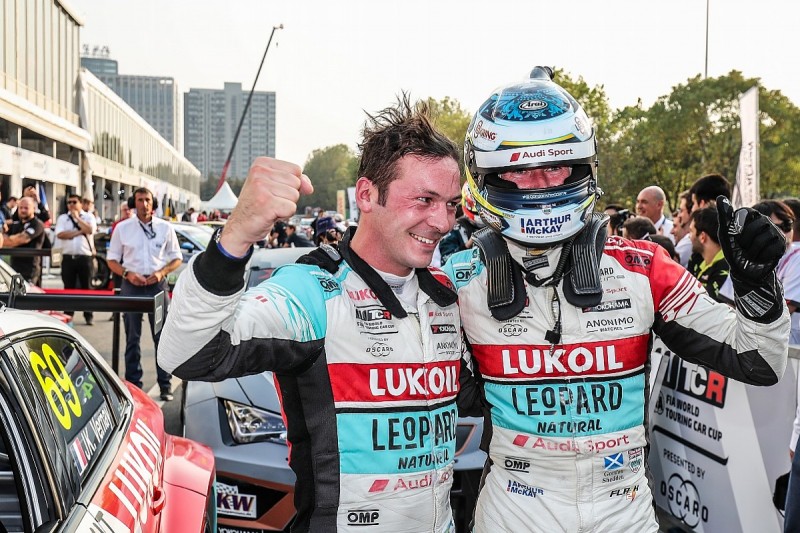 Ehrlacher clung on to fourth despite pressure from the leading Comtoyou Audi RS3 LMS of Frederic Vervisch, although he was later given a 30-second post-race penalty for jumping the start that dropped him to 18th.

Esteban Guerrieri was classified seventh, having resisted similar pressure from Berthon to that which Vervisch had applied to his Munnich team-mate Ehrlacher, while Aurelien Panis and Dupont completed the points.

Vernay's championship cause was aided by all four of the leading Hyundai contenders failing to score a point.

Thed Bjork - who won two of the three races at Ningbo last weekend - got closest to the top 10, advancing two places from his grid slot to finish 13th, while team-mate Yvan Muller was 16th behind the Sebastien Loeb Racing Volkswagen Golf GTIs of Mehdi Bennani and Rob Huff.

The BRC Racing Hyundais fared even worse: points leader Gabriele Tarquini could only manage 18th in his i30 N, finishing last of those on the lead lap, while Norbert Michelisz pulled into the pits before the start of the race and completed just three laps.