Monteiro was injured when the brakes on his factory World Touring Car Championship-spec Honda Civic failed at the end of the Spanish Grand Prix circuit's main straight, and he spent four weeks in intensive care in Spain and then Portugal before he returned home to begin his rehabilitation process.

He secured a race seat for the 2018 WTCR season with Boutsen Ginion but postponed his comeback before the start of the campaign without setting a timeframe for a return.

Monteiro has completed six tests in private sessions while sharing the track with other cars as he builds towards returning.

But in light of new information arising from a visit to FIA concussion doctors in Cambridge, Monteiro has now been advised to allow 11-12 months to pass following his accident before coming back.

It is now almost 10 months since his crash, which would, in theory, mean he could return for the four WTCR flyaway races, starting with the September 29-30 visit to Ningbo. 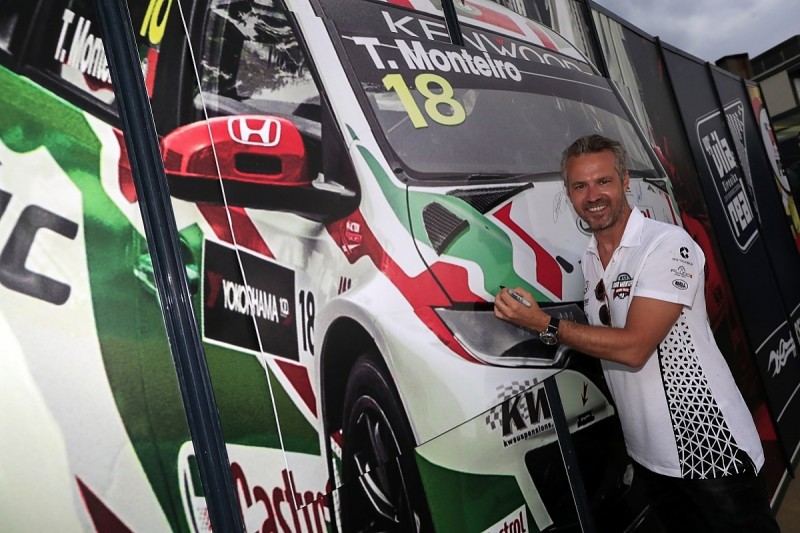 "I feel almost ready, pretty much," said Monteiro, who is missing his home round in Vila Real this weekend. "The testing I've been doing has been good.

"It's really a matter of what the doctors are worried about now. I can see my eyes are back to normal - I have maybe 2% double vision when I look completely to the right which is not affecting my driving or my day-to-day life at all.

"My cervical is completely glued again back together, my shoulder is good, the only concern is the trauma I had - the head trauma was quite significant.

"They want to have a period of 11-12 months minimum before you risk another impact.

"We're almost there so it's a matter of one or two months if everything is according to plan and keeps evolving well. There should be no reason [why] I don't come back."

But Monteiro, who said he was "a ghost" in the first stage of his recovery, was still cautious about setting a target return time.

"They [doctors] will recheck me in a month or so," he said when asked by Autosport what objectives he would need to pass before making a comeback.

"We will redo the impact test to see how I'm reacting, and then I will have to pass the medical exam in Portugal.

"There's still a process of things to do, but I don't see them being an issue.

"So whenever we decide with Honda we are in that timeframe where it is safe to go back [and] I feel ready, then we'll do these last exams.

"There's still this process of things to do, I cannot just go tomorrow, ask for my licence and go back.

"Everything seems very good, but there are still some more question marks."