Ehrlacher got ahead of polesitter Rob Huff at the initial start, and twice resisted attention from the fast-starting Peugeot 308TCR of Aurelien Comte to jump into a share of second place in the drivers' standings.

The race started chaotically, with a handful of drivers - in particular the frontrunning Audi and Volkswagen cars - slow to react to the lights going out.

That bunched the field up through the first handful of corners, with Norbert Michelisz - who dropped five places on the grid to 19th for a penalty carried over from the Nurburgring - and Yvan Muller getting together on the exit of the Turn 3 Hugenholtz left-handed hairpin.

Four-time World Touring Car champion Muller had nosed his Hyundai ahead of the similar i30 N of Michelisz around the outside of the corner, but the pair collided as Michelisz took the natural line out. 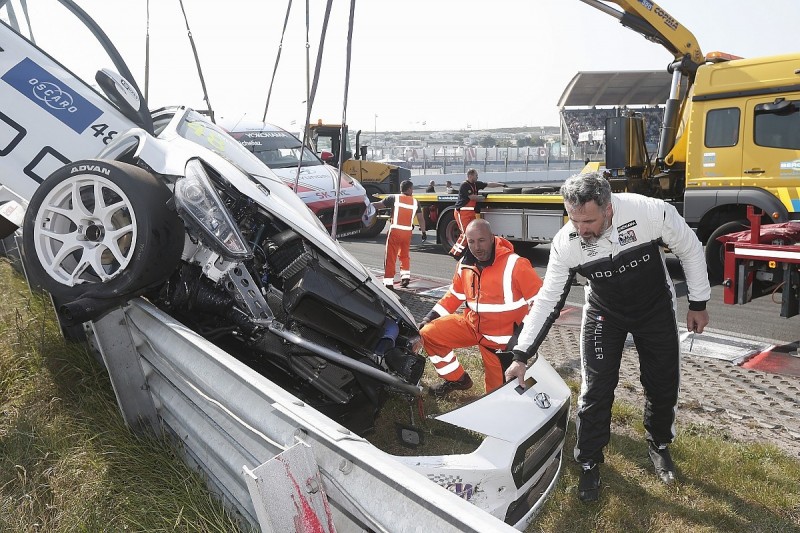 Muller - who called Michelisz "fucking stupid" on his team radio - part-mounted the barrier on the outside of the corner after a second touch. Michelisz was later awarded a 10-place penalty

The race was quickly neutralised and, a lap later, red-flagged to allow for the recovery of both cars and barrier repairs, which resulted in the race resuming more than half an hour after its original start time.

Ehrlacher backed the field up before accelerating away at the penultimate corner, taking the impressive Comte - who had leapt from seventh on the grid to second at the standing start - with him through the opening sequence of corners.

But Ehrlacher gradually eased away in his Honda Civic and had built a comfortable lead before a second safety car intervention to recover Fabrizio Giovanardi's Alfa Romeo Giulietta with a little over three laps remaining.

The 21-year-old had to have hits wits about him once more on the two-lap dash to the finish, with Comte harrying him for the lead on the restart, but Ehrlacher had enough in hand to hold his lead and crossed the line 1.217 seconds clear.

Having fended off Huff in the middle part of the race, Comte came through to score his first World Touring Car podium - and the first for the Peugeot 308TCR - with Huff completing the podium.

The Sebastien Loeb Racing driver almost had third taken from him by fellow Brit Gordon Shedden, but the WRT man could not get his Audi RS3 LMS stopped in time at the looped Tarzan first corner hairpin in the latter stages and slotted back in behind the Volkswagen Golf GTi.

Shedden was not presented with any further opportunities to attempt a pass, but fourth still marked the three-time British Touring Car champion's best result since joining the WTCR world cup as he beat team-mate Jean-Karl Vernay home over the line.

With two Hyundais out on the opening lap and Gabriele Tarquini returning his BRC Racing-run car to the pits, Thed Bjork was the only i30 N driver to complete the race.

The 2017 WTCC champion crossed the line 14th, behind the Alfa Romeo of Gianni Morbidelli.