Muller won Saturday's opening race from pole, moving ahead of Bjork into third in the championship as a result, then doubled up in race two when he was allowed through by both his nephew Yann Ehrlacher and Bjork.

Bjork also gave up two positions in the final race so Muller, who was stuck behind the BRC Racing Hyundai of Nicky Catsburg, could add another point to his tally.

Asked whether the team orders were predetermined or decided during the race, and why they had been used, Bjork told Autosport: "It depends on what's happening, and the team, we want to get all the points we can - so it's to get the team points.

"Whichever is most valuable for us, we work as a team because we want so much to win this, and we know how every point counts because we've been there before.

"Last year we won the teams' championship in the last race. So it's so important, and we're here together - that's the team game."

Muller is two points behind Esteban Guerrieri and a further nine short of Catsburg's team-mate Norbert Michelisz's WTCR-leading total of 316 points, with 85 on offer at next month's season finale at Sepang.

Bjork is 28 points off the lead, but would be level with Muller on 297 had he won the second race and not dropped back in race three.

But 2017 World Touring Car champion Bjork said it would not be fair to say he should have won the race because Ehrlacher also had to give up the lead to let Bjork through. 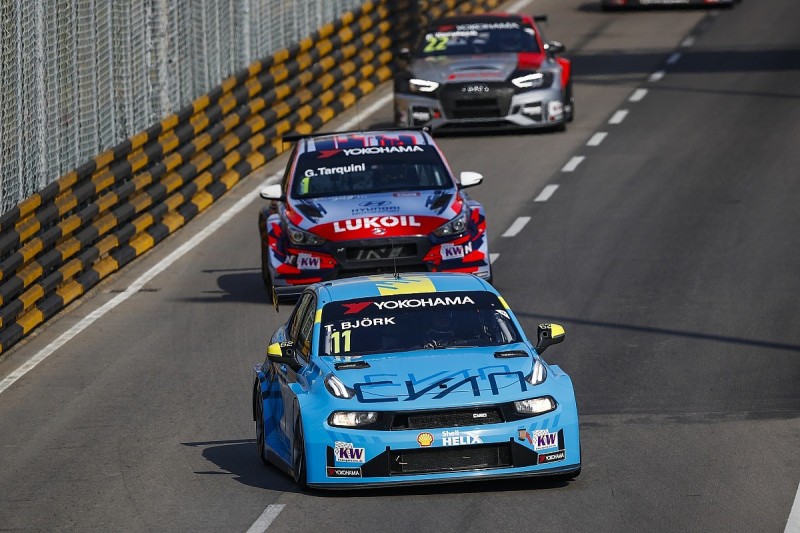 "I am [still in the title fight], but now he [Muller] has more points than me and that's the way we do it," added Bjork.

"And you cannot say the first one was my win, because then Yann [was] slowing, so it's everything, everybody helping out.

"And that's why it's a good feeling that we do this - it's not just one helping one, we all help each other.

"I think that it's something, because it's a hard championship, that can help us because we have all the team working on the same goal."

Muller made a point of thanking Bjork and Ehrlacher during the post-race two press conference.

"We knew of course straight away, because they were starting one and two with [Yann and] Thed, that if that was the case at the first corner Yann would let Thed past and if I was joining them, I would pass both of them," said Muller.

"It happened and thanks very much to Thed and Yann because that victory could have been them."