Muller started fifth, but had dragged his Cyan Racing Lynk & Co 03 into the lead before the end of the opening lap and was not headed thereafter.

The four-time world champion's nephew Yann Ehrlacher led the early reckoning in his Lynk & Co 03, leading Bjork on the run down to Lisboa while Muller passed the Alfa Romeo Giulietta Veloce of Kevin Ceccon and Esteban Guerrieri (Munnich Motorsport Honda) to run third.

Ehrlacher then moved over on the exit of Maternity Bend at the top of the mountain, letting Bjork and Muller through into first and second, before Muller passed Bjork for the lead.

That position change was not shown on the race broadcast, but Muller indicated in his post-race television interview that he "owed" both Ehrlacher and Bjork.

Bjork stayed in Muller's slipstream for the remaining seven laps but did not challenge his team-mate, with Muller adding to his Saturday race win to move to within 20 points of the WTCR standings lead. 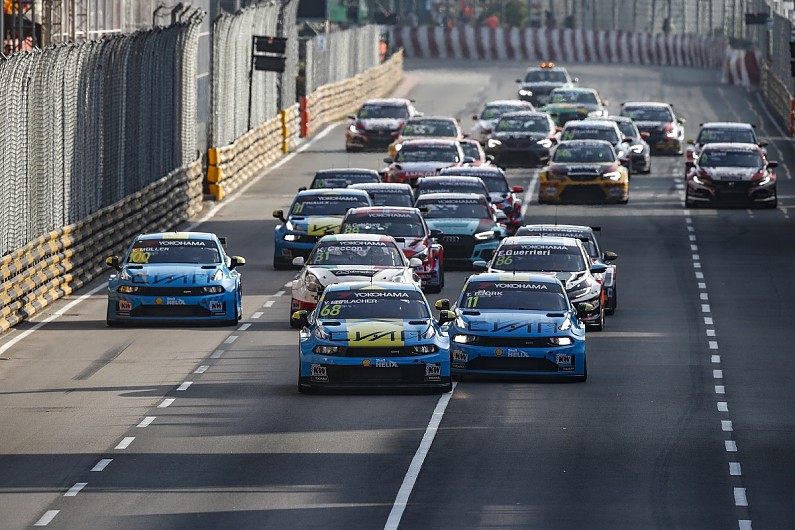 The two leading Lynk & Cos were kept honest by Ceccon, who recorded his second podium finish of the weekend by finishing third, while Guerrieri gave his own title hopes a boost with a gutsy drive to fourth.

The Argentinian briefly occupied third after passing Ehrlacher opportunistically at Lisboa at the start of the second lap, though his Civic Type R was easy prey for Ceccon a lap later.

Guerrieri was visibly on the limit in his attempts to keep the rear of the Civic in line, but rebuffed a number of attempted overtakes from the BRC Hyundai of Nicky Catsburg, including a final-lap assault at Mandarin, to secure the position.

Fifth ultimately went the way of Johan Kristoffersson (Sebastien Loeb Racing Volkswagen Golf GTI), ahead of Ehrlacher - who lost a handful of positions when Guerrieri squeezed past him - the fourth Lynk & Co of Andy Priaulx, and respective Comtoyou and WRT Audi drivers Frederic Vervisch and Jean-Karl Vernay.

Catsburg ultimately dropped back after his failed attempt to pass Guerrieri, giving 10th to his points-leading team-mate Norbert Michelisz.

The Hungarian lost one position from his 12th-place starting position on the opening lap, but was handed a position early on by team-mate Gabriele Tarquini, passed the Volkswagen of Rob Huff soon after, and was promoted one additional position when Catsburg slowed.

Those gains mean Michelisz has an 11-point margin over Guerrieri in the title race, with Muller a further six points back.

Billy Lo, the one remaining wildcard on the entry, was not classified after completing five laps.