Double World Rallycross champion Johan Kristoffersson resisted a challenge for the lead on lap one to claim his first World Touring Car Cup victory in the second Nurburgring Nordschleife race.

Kristoffersson was challenged by the Audis of wildcard entrant Antti Buri and Comtoyou driver Frederic Vervisch on the grand prix loop but, having fended off those attacks, was able to break free to win for the first time since switching world championship disciplines.

Vervisch attempted to pass both Buri and Kristoffersson as they squabbled, although Kristoffersson was able to hang the Audi RS3 LMS out to dry and scampered clear from there.

He ended the second of the three laps 3.2 seconds clear of Vervisch and did not let up, eventually claiming the SLR VW squad's first win of 2019 by 5.108s.

Vervisch ended up in a similarly comfortable second but, as had been the case in Friday's opening race, the final podium position was only decided on the final lap.

Gabriele Tarquini (BRC Racing Hyundai i30 N) and Kristoffersson's team-mate Rob Huff had been in a private battle for the place on the final lap, until they came together at the Carousel.

That put Huff, who had been on the outside line, in the barrier and out of the race with front-end and suspension damage.

Tarquini was able to continue and maintained third, but was caught by team-mate Augusto Farfus and the KCMG Honda Civic Type R of Attila Tassi - with Farfus getting ahead on Dottinger Hohe to secure his first podium since returning to World Touring Cars. 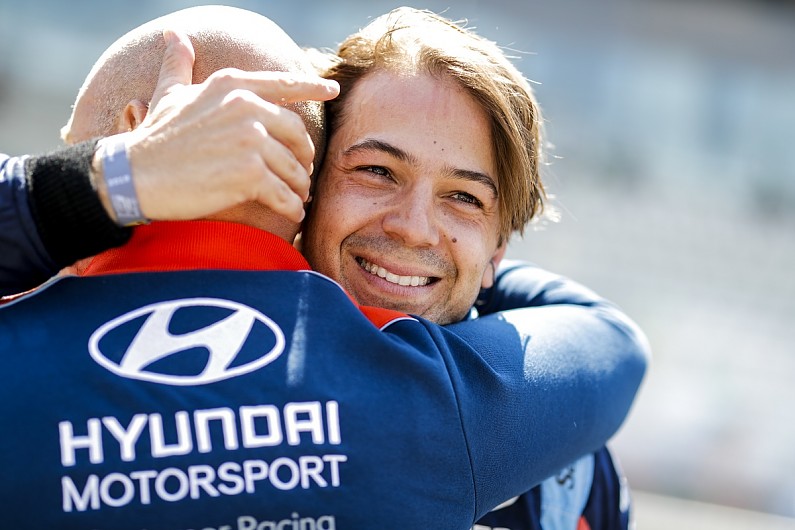 Reigning champion Tarquini did cling on to fourth ahead of Tassi, who scored his best WTCR result to date, while Benjamin Leuchter was sixth in the third SLR VW.

Jean-Karl Vernay secured 10th in his WRT Audi, ahead of Tom Coronel, Nicky Catsburg and Thed Bjork - who was the only Cyan Racing Lynk & Co 03 driver to score any points.

Bjork finished 14th on the road behind Buri, who is ineligible for points as a wildcard.