Leuchter beat the sister VW Golf GTI of Rob Huff to top spot with a fastest time of 9m51.327s, as conditions rapidly improved.

Although the entire field headed out on a full set of wets for their opening laps, most opted to switch to slick front tyres as track conditions improved.

Chief among those that stayed out for a second lap on wets were PWR Cupra driver Daniel Haglof and the Cyan Lynk & Co 03 of Yann Ehrlacher, who shot to the top of the order on their second laps.

But their sector times were quickly improved upon by those who had opted for slicks.

Leuchter and the BRC Racing Hyundai i30 N of Norbert Michelisz went fastest initially but were then split by Huff, before Johan Kristoffersson - who was some way further back on the track in his Golf - beating the previous best benchmark by 4.990 seconds.

Kristoffersson's effort was bettered by wildcard entrant Antti Buri, before Haglof crashed at Tiergarten before the run to the finish line while on course to improve with his final lap, an incident that prompted a 'Code 60' slow zone in the final sector.

But while that cost drivers more than 10 seconds, the amount of time cars were able to find over the rest of the lap meant improvements were still viable. 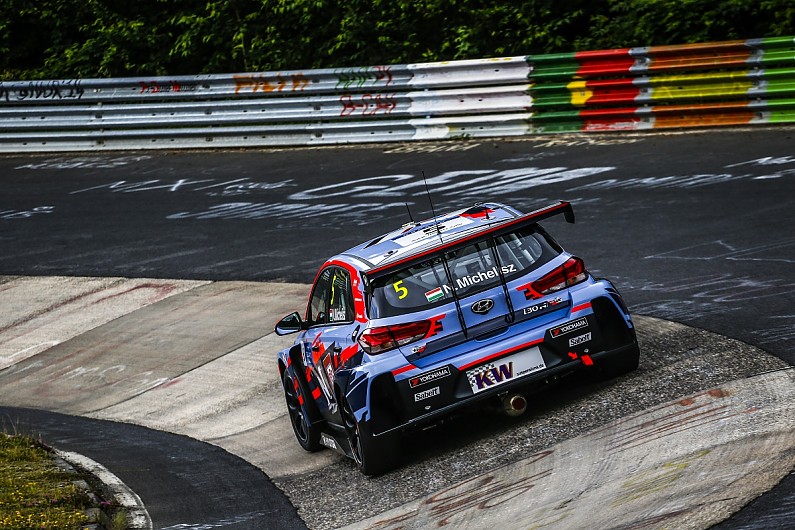 Michelisz was the first to improve significantly, going fastest by 1.8s, before the VWs hit their stride.

Huff's 9m52.809s sent him fastest ahead of race one polesitter and championship leader Esteban Guerrieri (Munnich Motorsport Honda Civic Type R), only for Leuchter - a Nordschleife expert - to beat that time by 1.482s.

Guerrieri ended up best of the rest behind the two VWs ahead of Michelisz, with the second BRC Hyundai of Gabriele Tarquini beating Mehdi Bennani (SLR VW) to fifth.

Frederic Vervisch was Audi's lead representative in seventh ahead of Attila Tassi, who had been fastest in his KCMG Civic before Michelisz's improvement, while Buri ended up ninth in his Audi RS3 LMS.

Kristoffersson failed to improve on his final lap and was 10th in the fourth of the VWs, ahead of Augusto Farfus and the Comtoyou Cupras of Aurelien Panis and Tom Coronel.

Yann Ehrlacher was the Cyan Racing Lynk & Co outfit's lead representative in 17th, with the sister cars of Andy Priaulx, Thed Bjork and Yvan Muller immediately behind him.