In a battle between two multi-discipline experts, Mattias Ekstrom came out on top to win the second instalment of the World Rallycross' Latvian double-header, his second win of the campaign.

Ekstrom set a pair of fastest times in qualifying to top the Intermediate Classification, then won semi-final one ahead of KYB Team JC team mate Robin Larsson to secure pole for the final.

He then controlled the main event from the front to net victory, and close the points gap to Johan Kristoffersson.

Series-leader Kristoffersson had used a superior tyre strategy on Saturday, the first of the two Latvian rounds to claim victory, but he didn't set a single fastest time through qualifying in round six on Sunday and ended up second to Ekstrom in the overall qualifying order.

Kristoffersson won semi-final two to join Ekstrom on the front row of the final, and despite broken front bodywork on the Volkswagen Polo showing just how close he'd been to the eventual winner's Audi in the opening corners, Kristoffersson was unable to better Ekstrom's pace by anything more than a few hundredths of a second at any point during the encounter.

Kristoffersson took his joker on lap five in a bid to leap-frog Ekstrom, but the double-DTM champion had done enough to take the win after he too took his compulsory extra route on the final lap. 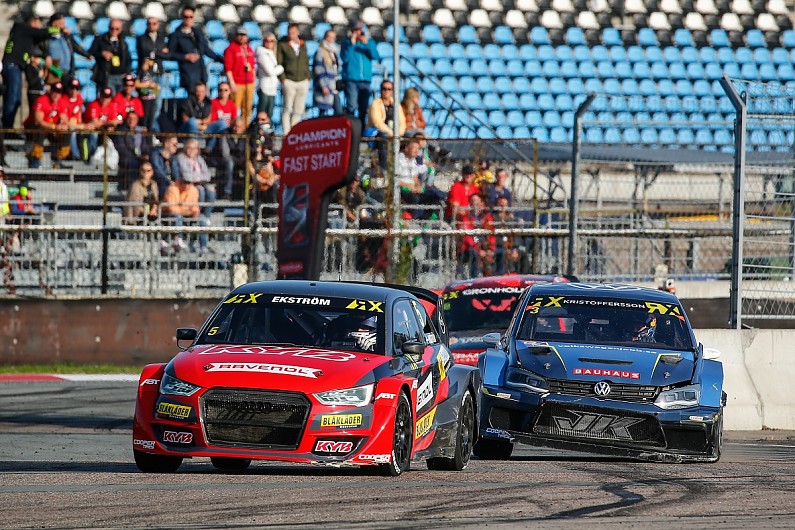 Larsson meanwhile claimed his first World RX podium since the opening round of the 2016 campaign in Portugal, and made it a maiden double-rostrum appearance for the KYB Team JC squad.

A lap three joker in the final kept Larsson just ahead of reigning champion Timmy Hansen on track, where he kept the door shut in the final corner at the joker merge to ensure there was no way through for Hansen's Peugeot 208.

Larsson had fended off pressure from a fast-starting Niclas Gronholm in the opening stages of the race, Gronholm later hassling Kristoffersson when the Swede took his joker, but Gronholm dropped to fifth at the finish, behind Hansen in fourth, when the Finn took his joker on the final tour.

Kevin Hansen finished sixth, having been elevated into the final when Timo Scheider, who had initially finished in the top three of his semi-final, was disqualified from the race for contact with Andreas Bakkerud.

The incident, which forced Bakkerud into the wall on the inside of the turn-four breaking ahead, ripped the left-front corner off the Norwegian's Renault Megane and he retired from the race on the spot.