PSRX's Volkswagens would have remained the cars to beat in the World Rallycross Championship in 2019 had all the manufacturers stayed in the series, reckons double champion Johan Kristoffersson.

The World Rally Car-derived Polos run by Petter Solberg's team have dominated World RX for the past two years, with Kristoffersson claiming both titles and winning all bar one round in 2018.

But following the closure of the factory Peugeot and Audi programmes amid the uncertainty over RX's planned electric switch, Solberg and VW elected to "pause" its rallycross efforts.

Kristoffersson will now race in the World Touring Car Cup in 2019.

He thinks the Hansen-run Peugeot team that fielded WRC legend Sebastien Loeb and started the RX manufacturer exodus would have been strong competition next year, but that ultimately PSRX would have had the edge.

"I was already very disappointed when Peugeot pulled out," Kristoffersson told Autosport.

"They had great performance this year so it was very disappointing because I want to compete against the best.

"For sure Volkswagen Motorsport and PSRX was a very, very strong package and we just kept being stronger with the materials we had.

"I think we would have been extremely strong in the 2019 season, no matter what other teams and manufacturers are there."

Mattias Ekstrom was the last man to beat Kristoffersson to a World RX title when he won the 2016 crown with his EKS Audi project. 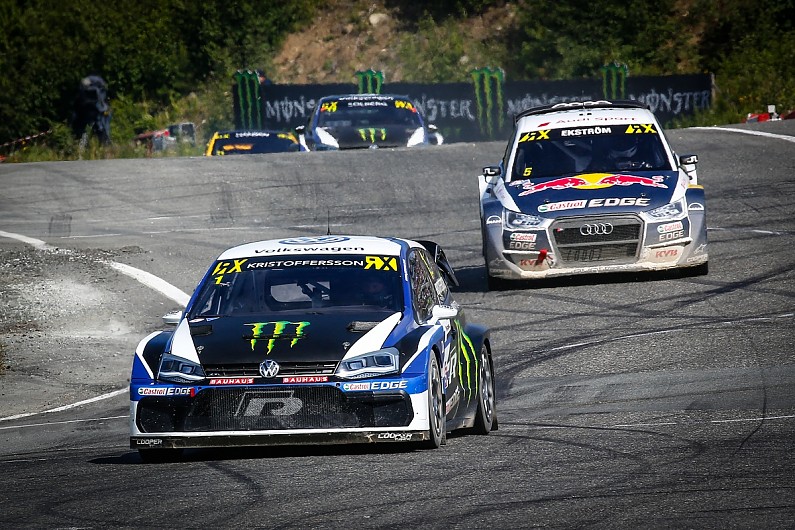 The double DTM champion believes the PSRX VW gave Kristoffersson enough of a margin to stay out of trouble this year.

"When you have already a little bit of an edge in the car compared to everyone else, you can always drive a little differently and you don't have to go into all the battles because you know even if you get a second chance, that's good enough," Ekstrom told Autosport.

"Everybody knew if he had a bad heat or something he would come into the next heat and have a clean run.

"Then if he got a clean run, the chance he would put it on the top of the time sheets was big, then he would be on the inside of the grid in the last race for the next session and it would be difficult to beat him.

"He just took out the potential of the car. It's like that in any category - when you have the strongest car there is one driver who is better than the other and definitely that was him."