Thierry Neuville continues to lead Rally Sweden despite a spin on Saturday morning's stages, while Craig Breen thrust himself into contention for a first World Rally Championship win

Neuville looked relatively comfortable until SS10 Hagfors, where he and then second-place man Andreas Mikkelsen had a spin in the same place, which dropped Mikkelsen out of the top three.

Neuville had an earlier scare when he had to use the manual gear shift with a hydraulic problem, but he fixed that issue on the road section.

He recovered from his spin to set the fastest time on the morning's final stage and boost his lead.

Breen had a relatively uneventful morning, but was consistently in the top five on stages and avoided making any errors. 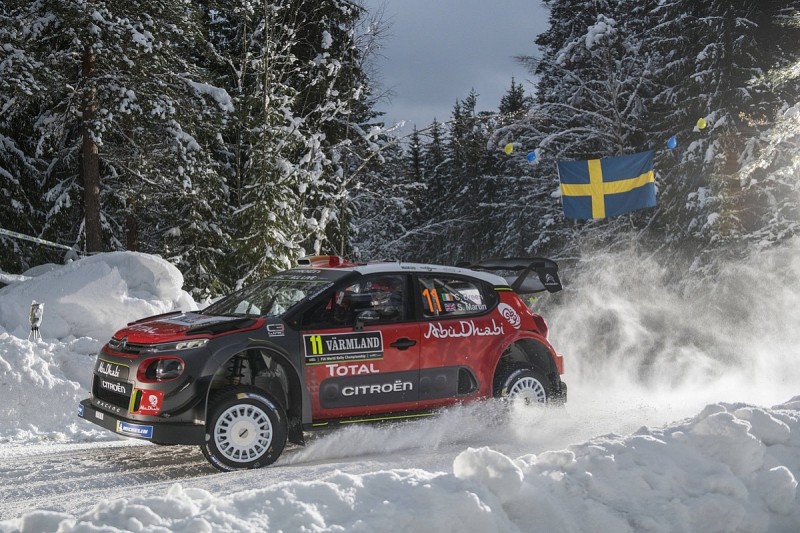 He now sits 5.9 seconds behind Neuville, with an 11.7s lead over Mikkelsen - who had dropped out of the top three after his spin but reclaimed a podium spot on the last stage of the morning.

The star of the morning was Ott Tanak, who struggled with his early road position on Friday but was back on form on Saturday as he topped two of the three morning stages in his Toyota Yaris WRC.

The Estonian has moved ahead of M-Sport's Teemu Suninen to sit eighth overall, and had eroded his team-mate Jari-Matti Latvala's advantage in seventh to just eight seconds by the end of the loop.

Neuville and Mikkelsen's team-mate Hayden Paddon struggled with an "aggressive" set-up on his Hyundai but holds fourth, narrowly ahead of works-Citroen debutant Mads Ostberg and the recovering Toyota of Esapekka Lappi who went off the road while in the podium positions yesterday.

Suninen in ninth used choice language to describe his driving on the morning loop but he still heads Breen's Citroen team-mate Kris Meeke, who rounds out the top 10.

After sweeping the road on Friday, Sebastien Ogier is second on the road and has made little progress in recovering.

He lies 11th, and did overcome his team-mate Elfyn Evans on the morning loop after he struggled with set-up on his Ford Fiesta WRC.

In WRC2, Japanese driver Takamoto Katsuta regained his lead having slipped back earlier on in the morning. The Finnish-based driver leads reigning class champion Pontus Tidemand.