After a false start when the loop-opening Chmielewo stage was cancelled due to spectator overcrowding, the rally produced three different leaders in as many stages.

Latvala's Toyota was less happy as the roads became more rutted - conditions in which he felt he had done insufficient testing to get a decent set-up.

He hung on to his morning lead for one stage before Tanak moved ahead, but it was Neuville who was notching up fastest times and the Hyundai hit the front on Stare Juchy - the day's last full-length stage.

Tanak then went a touch quicker than Neuville on the evening Mikolajki Arena superspecial, meaning Neuville holds a lead of just 1.3 seconds overnight, with Latvala another 5.3s back in third.

As the morning rain finally stopped and conditions began to dry, running first on the road went back to its usual status of being a huge impediment - with Sebastien Ogier reduced to ploughing mud clear for those behind.

But he felt there was more to "analyse" than just the road conditions, as he went only 11th, 10th and eighth fastest on the afternoon's main stages and the gap to the front ballooned to 35.1s.

Much happier with his Hyundai after lunchtime set-up changes, Hayden Paddon closed what had been a 36.3s gap to Ogier to 4.5s by the end of the day, with team-mate Dani Sordo tagging along too. 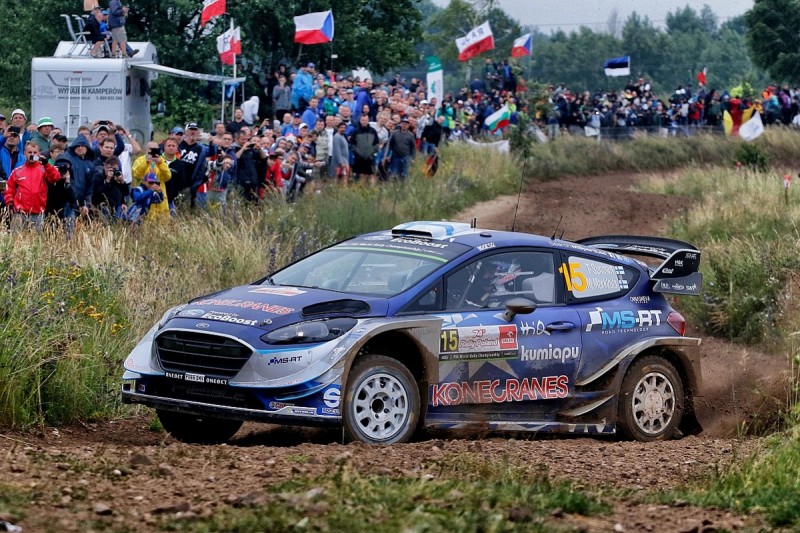 M-Sport's World Rally Car debutant Teemu Suninen provided the sensation of the afternoon when he won the Wieliczki stage on his first full day in the top class - prompting the unusual reaction of "oh, really?" from the WRC2 regular when he was informed.

Consistently strong pace from Suninen brought him past Juho Hanninen's Toyota into seventh as the afternoon progressed.

Stephane Lefebvre heads Mads Ostberg in a close battle for ninth, both of them getting ahead of and pulling clear of Elfyn Evans as the DMACK tyres struggled in the conditions.

Bar a repeat of his Thursday win on the superspecial, Evans spent the afternoon being reeled in by the recovering Andreas Mikkelsen, who had much more faith in his repaired Citroen after set-up changes at service.

Citroen's upturn didn't extend to Craig Breen, as he struggled massively for confidence even once his car was back to four-wheel-drive. He will start Saturday back in 25th place.