Toyota’s Kalle Rovanpera stormed to the Rally New Zealand lead after team-mate Elfyn Evans crashed during a hectic Saturday morning that was shortened due to a red flag.

The World Rally Championship leaderboard suffered a significant shake up as Evans started the day with a 5.2-second lead, having inherited the advantage from Hyundai’s Ott Tanak.

Overnight, Tanak was among three drivers - alongside team-mate Thierry Neuville and Rovanpera - to be issued 5s penalties for hybrid overuse during Thursday’s super special.

Rovanpera began the day 12.2s in arrears but climbed to third after the day’s first stage before taking the lead by winning Stage 9, taking advantage of a crash from Evans.

The final stage of the loop was cancelled when M-Sport’s Gus Greensmith, running in sixth, suffered a huge roll after misjudging a fast left-hander. Both Greensmith and co-driver Jonas Andersson emerged from the incident unscathed.

As a result, it left Rovanpera to head to service with a 4.6s lead over Tanak with Toyota’s Sebastien Ogier 6.5s back and Evans 36.2s adrift.

Neuville, despite a gearbox issue, held fifth ahead of team-mate Oliver Solberg and Toyota’s Takamoto Katsuta.

The morning began with a sign of what could have been for M-Sport’s Craig Breen as the Irishman returning, after his off on Friday, rattled off a first stage win of the event.

Breen, who was first on the road, did receive the best of the wet and muddy conditions that appeared to deteriorate.

However, the effects of Friday’s crash from the lead battle were still haunting the M-Sport driver. 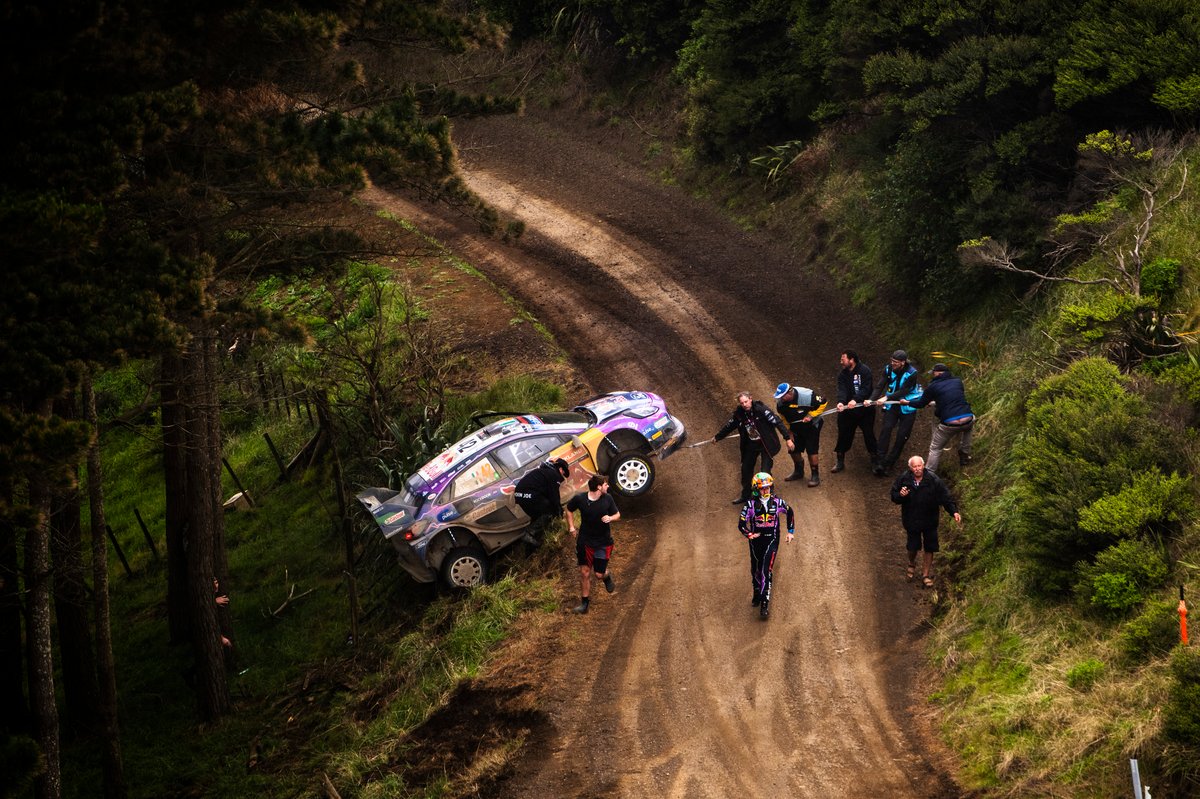 "I'd love to tell you everything is all lovely and rosy,” said Breen. “The roads are beautiful, but my soul is still hurting a bit from what happened yesterday.”

Rovanpera made light work of the increased deficit to the rally lead on the day’s first stage.

The Finn, celebrating his 22nd birthday, was Breen’s closest rival, 4.1s adrift. It was enough to help Rovanpera climb to third overall as Ogier dropped 13.6s.

Tanak made a mistake during the stage, unseen by the television cameras, and ended the test 8.1s adrift. However, he was crucially two seconds faster than rally leader Evans to reduce the arrears to 2.8s.

“We had one mistake - we had a wrong note and did some damage probably to the front,” said Tanak. “I have no feeling in the car, so we are not in the fight. I don't see that at the moment.”

The following stage provided the sixth lead change of the event so far as rally leader Evans hit trouble in spectacular fashion.

The Welshman oversteered into bank at a fast right-hander, which lifted the GR Yaris into an airborne spin, damaging the front and rear. The impact resulted in Evans losing his entire tailgate just like his team-mate Rovanpera did at the Acropolis Rally Greece last time out.

Evans managed to reach the stage end but dropped 36.5s in the process, while Rovanpera won the stage to incredibly jump from third into a 4.6s lead over Tanak, with Ogier third, and Evans dropping to fourth.

Evans was forced to stop on the following road section to carry out more frantic repairs, and made use of the puddles of water at the road side to fill up his camel bag to re-fill the GR Yaris’ radiator. It was a scene similar to that of team-mate Esapekka Lappi, who rushed to a lake at Rally Finland to fetch water to repair his radiator after a roll.

Luckily, Evans managed to reach the short 5.81km final stage of the loop before the mid-point service. The Toyota driver was dealt even more good fortune when organisers cancelled the stage after Greensmith’s huge crash, meaning he wouldn’t drop even more time.

Greensmith’s Puma clipped a bank, triggering a violent roll before coming to a rest half on the road, which meant a recovery truck would be needed to retrieve the heavily damaged car.

At this point, Breen, Neuville, Katsuta, Solberg and privateer Lorenzo Bertelli had completed the stage.

In WRC2, local favourite Hayden Paddon continued to lead the class comfortably from Kajetan Kajetanowicz, while Supercars champion Shane van Gisbergen held onto third in class on his WRC debut.

The WRC crews will navigate a second pass of the morning stages in the afternoon to complete Saturday’s leg.