Sebastien Ogier has opened up a healthy lead over world rally champion Kalle Rovanpera following a dominant display on Friday at the World Rally Championship curtain raiser in Monte Carlo.

Ogier’s relentless pace will see the eight-time Monte Carlo winner head into Saturday equipped with a 36.0s advantage over Rovanpera, who managed to leapfrog Hyundai’s Thierry Neuville into second across the afternoon loop.

Neuville was unable match the leading Toyotas, resulting in the Belgian reaching the service park in third, 1.9s behind Rovanpera, but 37.9s adrift.

M-Sport’s Ott Tanak ended the loop in fourth, albeit 54.2s away from the outright pace as the Estonian continued to search for the set-up sweet spot in his new Ford Puma.

Toyota’s Elfyn Evans had issued Ogier a strong challenge at the start of the day which was undone by a right rear puncture that left the Welshman in recovery mode in the afternoon. The two-time WRC runner-up did pick up a stage win but will face a 1m02.3s deficit to the rally leader.

Dani Sordo (Hyundai), Takamoto Katsuta (Toyota) and Esapekka Lappi (Hyundai) completed the top eight, while M-Sport’s Pierre-Louis Loubet produced a heroic effort to navigate the three afternoon stages without power steering. The Frenchman dropped outside the top 20 in the process.

Ogier’s perfect run of stage wins came to an end on the afternoon’s first test held in bright and dry conditions. Technicians from Hybrid suppliers Compact Dynamics were able to resolve the hybrid issue that occurred towards the end of Friday morning. However, Ogier was unable to match the recovering Evans.

Evans managed to pip Ogier by 0.5s across the 18.33km test although Ogier admitted he was not in maximum attack mode given his sizeable lead.

"So far the hybrid is working - the guys managed to fix it with the laptop at midday," said Ogier. We have a 30s lead so we can manage not to take full risks.”

Despite his elevated road position, Rovanpera produced arguably his best stage of the rally so far to finish only 2.0s behind Evans.

Toyota enjoyed a domination of the test as Katsuta fired in the fourth fastest time to complete a. 1-2-3-4. The next best was Hyundai’s Neuville, who was 4.2s slower, which ultimately demoted him to third overall, 0.4s behind Rovanpera. 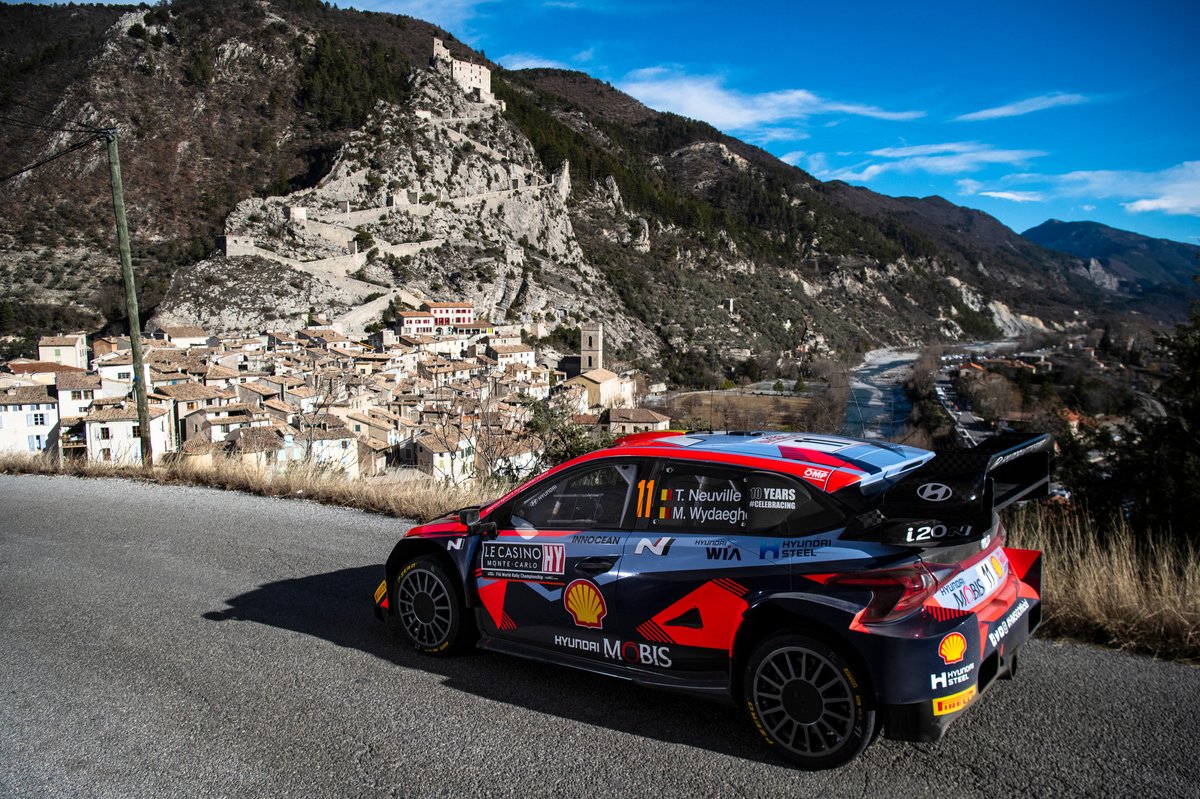 Neuville was the best of a trio of struggling Hyundais as both Sordo and new signing Lappi were unable to extract the performance to compete at the sharp end.

"I don't understand where I can get the time,” said Sordo. “For me it was a clean run, but when you see the times of the others they are all faster.”

Tanak led the Ford charge with the sixth-fastest time, showing signs that he is beginning to gel with the Puma. His team-mate Loubet faced a much tougher task, having to fight the through the series of tight turns without power steering. The Frenchman lost 2m35.9s in the process.

Ogier resumed normal service on Stage 7, picking up his sixth stage win of the rally as he edged Evans by 1.6s.

Rovanpera enjoyed a faster pass through Puget-Théniers - Saint-Antonin compared to his morning effort, but once again found himself trailing his team-mates, as the Finn dropped 3.1s to the leader. Neuville was 0.2s slower despite a committed run, as the gap to Rovanpera in the fight for second overall grew once more.

"I was quite on the maximum to be honest... that's all I can do,” said Neuville.

Team-mate Lappi was also disappointed with his lack of pace competing in his first rally for Hyundai and first WRC event since Greece last September.

"Everything is okay now, except the times. I just can't understand because the car feels good and the driving is okay. I am disappointed,” said Lappi.

The final stage of the day belonged to Rovanpera as the Finn notched up his first stage win of the season.

The world champion took 3.1s out of Ogier, who elected not to push to the maximum, to ensure he avoided trouble.

"I am very satisfied. Obviously, the risk of punctures was higher in this one so I took it a bit easy. I'm just happy to bring the car home tonight,” said Ogier.

Neuville was also quicker than Ogier, but was 1.3s shy of the pace setting Rovanpera.

In WRC2, Nikolay Gryazin ended the day with a comfortable 29.7s lead over Yohan Rossel.

Crews will complete 111.78 kilometres spread across six stages on Saturday.