Despite only having time for a relatively limited test programme in the month since joining M-Sport following Volkswagen's withdrawal, Ogier and co-driver Julien Ingrassia won the Monte for the fourth straight time.

M-Sport was on course for a one-two before an engine electronics problem dropped Ott Tanak to third on the final morning, while the DMACK-shod third car of Elfyn Evans took three stage wins and sixth overall.

Toyota was the only fully-fledged manufacturer team on the podium, with Jari-Matti Latvala second on the new Yaris's debut.

Hyundai dominated with Thierry Neuville until he crashed on Saturday so it had to settle for fourth with Dani Sordo, while Kris Meeke and Stephane Lefebvre had problem-filled weekends in Citroen's 2017 cars.

"There's nothing that scares me out there," Wilson said.

"We're the only team that scored a fastest time with all three of our cars and that tells you something.

"It was a lift for the team when Seb first tested the car and then said he wanted to drive it.

"We knew we'd got it right then and this has given us another lift.

"But this is just the start of what we can achieve.

"We all know we have got a lot of work to do to keep this pace up and keep improving.

"I want us to be in this same position next season and that's going to take a lot of work through the whole team - from the engineers to the people trying to find us a sponsor."

Ogier fell from second to ninth when he slid off the road on Friday's first stage, but he recovered all the lost positions before Neuville's error handed him a commanding lead. 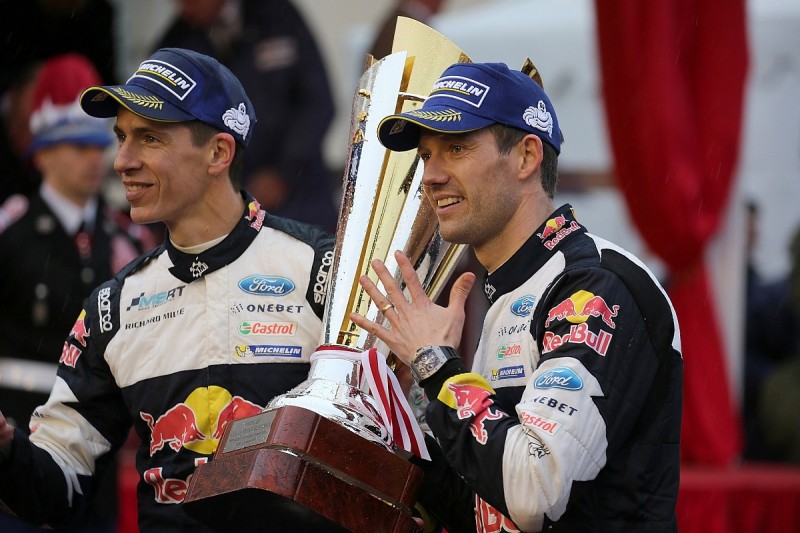 "This is the Monte, everything is possible on this rally, but before the start I was talking about being happy with a podium and I really meant that," Ogier told Autosport.

"I was missing so much preparation for this rally, but we have done it.

"It was incredible. I was congratulating these people, a lot of them I still don't really know so well.

"But I guess this is a very good way to start a new relationship."

The result was the first WRC victory for M-Sport since Rally GB 2012, when Jari-Matti Latvala won with what was then still a factory-backed Ford.

"It has been difficult," said Wilson. "We're competitive, we're all in this to win and when we're not winning it hurts.

"I can't believe it's so long since the last one, but we've got the taste for it again.

"I'm so relieved at this result.

"There's no doubt it's taken a couple of years off my life getting Seb and Julien in the car, but this result is fantastic for all of us."