The World Rally Championship burst back into life after an eight-week break in Croatia, which served up a contender to join the WRC’s all-time great grandstand finishes. Autosport reviews the highs, lows, turning points, close calls and heartbreak from a tarmac classic won by Kalle Rovanpera

If they continue to perform at this level, there will be shortage of superlatives to describe Kalle Rovanpera and Jonne Halttunen. The pair take the top performer award for the second event in row, following their impressive run to victory in Sweden with a breathtaking display in Croatia.

This victory is without question Rovanpera’s best of his fledgling career, and his fourth win in the last nine WRC rallies since scoring a breakthrough maiden win in Estonia last July.

Before the weekend, Rovanpera had never won on tarmac and headed into Rally Croatia with limited knowledge - having crashed out five kilometres into last year's opening stage - that left many to suggest he may not be the favourite for victory.

However, Rovanpera reached a new level across the tricky three-day asphalt event, as wet and foggy weather made conditions particularly difficult for crews. The 21-year-old did benefit from having the cleanest road, but he was also the first to encounter the challenges that lay ahead.

PLUS: How Rovanpera's Croatia turnaround sent a message to his WRC rivals

To lead by more than minute on the opening day is rare feat, which outlines just how impressive Rovanpera’s drive was as he won six of the first eight stages in a performance Toyota boss Jari-Matti Latvala labelled as Rovanpera’s best yet in a WRC car.

In truth, he could have enjoyed a relatively comfortable run to victory, but a front left puncture on Saturday’s Stage 11 reduced his advantage to 18.2s over Tanak. The only blemish was an incorrect tyre call that left him with a combination of wets and hard tyres to tackle a sopping wet penultimate stage, where a 28.4s lead turned into a 1.4s deficit to Hyundai’s Ott Tanak heading into a final stage showdown.

Despite being on inferior tyres for the conditions, Rovanpera saved his best until last, producing a Colin McRae-style “full send” power stage drive that will live long in the memory of rally fans to overhaul Tanak and snatch the win by 4.3s.

It left onlookers stunned, including his team boss Latvala, who labelled Rovanpera as “miracle kid” and was unable to explain how his driver pulled off the victory.

“It was an amazing performance,” Latvala told Autosport. “I did not think he could win the stage and the rally. On paper we were sure Tanak had better tyres and he was going to win, but I don’t know where he pulled that speed and that attack from. I have no words to describe the drive that he did.” 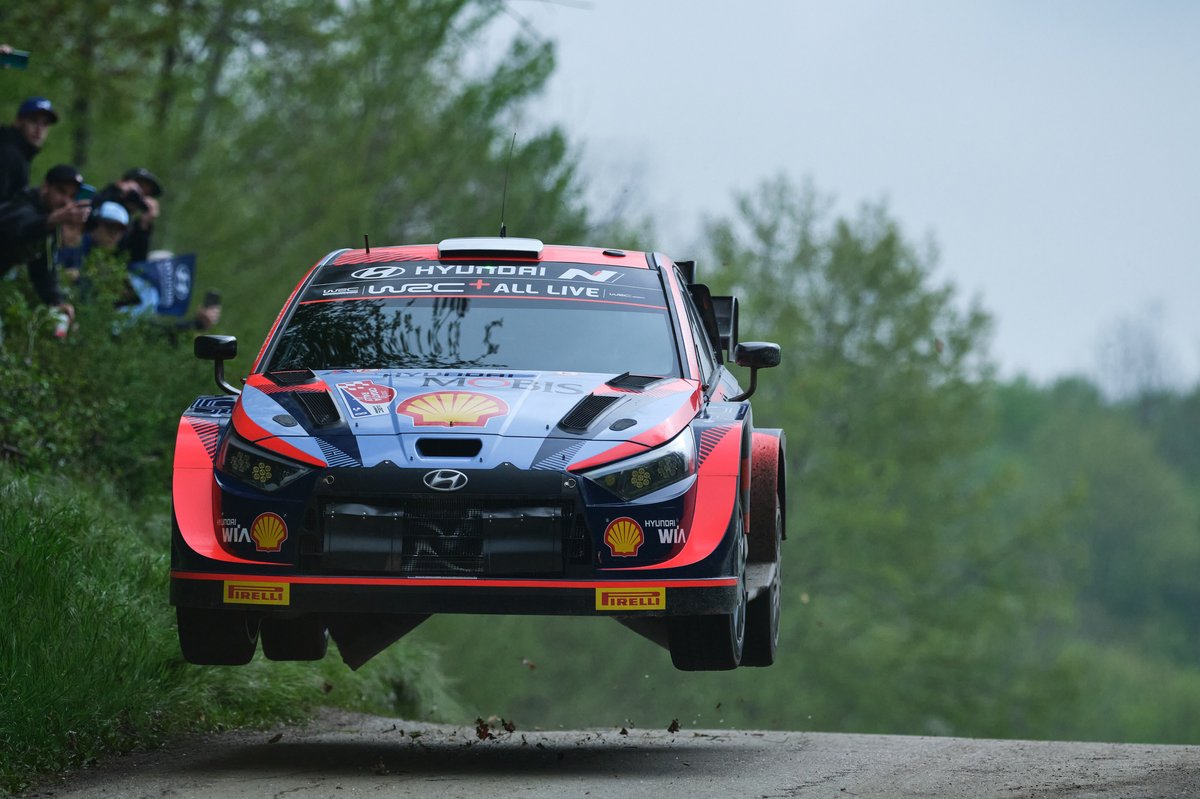 Ott Tanak deserves huge credit for the fight he put up to try and wrestle a win away from Rovanpera. The Hyundai driver openly admitted that he was only able to challenge Rovanpera thanks to the conditions and acing the tyre call, but there is no doubt the 2019 world champion extracted the maximum out of his Hyundai i20 N.

The Estonian managed to close to within 13.0s of Rovanpera following the Finn’s puncture on Saturday and applied real pressure on the leader before a stunning drive in the wet on Sunday to take the lead.

Tanak once again showed his class behind the wheel to score a first podium since Rally Finland in October and was gracious in defeat after Rovanpera’s final stage effort.

“It is nothing to do with [hard] luck, just pure speed and performance from Kalle,” Tanak told Autosport. “He was really fast all of the weekend. We were just able to manage him and keep him under pressure with our good tyre choices and the tactics for different stages.

“But other than that, I would say we had nothing to respond to him. All we could do is not do any mistakes and just keep going. It didn’t completely pay off, but considering where we were on Friday evening, being 1m30s behind and to go into the final stage as we did, it was the best we could do.”

While his rally ultimately ended in a retirement, reigning Junior WRC champion Sami Pajari turned heads in the new M-Sport-built Rally3 Ford Fiesta by posting the eighth fastest time on Stage 11. That was quicker than WRC Rally1 runners Takamoto Katsuta (Toyota) and Pierre-Louis Loubet (M-Sport- Ford), and only 1.5s shy of Gus Greensmith.

The Finn was also quicker than all bar one of the WRC2 runners to outline his pace on the tricky wet Croatia roads. 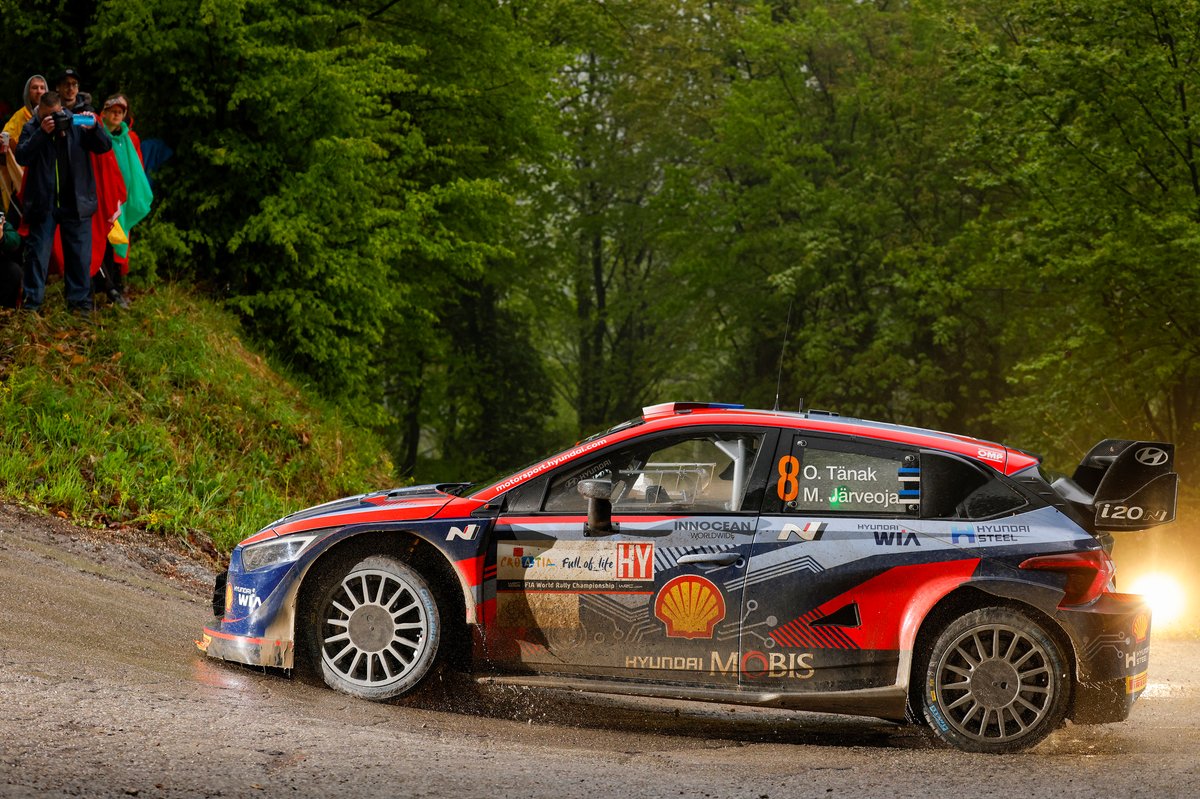 Team of the Week: Hyundai Motorsport

Hyundai continued its recovery from a poor start to the season with a double podium in Croatia and challenged for the victory right up until the last stage.

Considering the team was significantly adrift of its Toyota and M-Sport rivals in Monte Carlo, the turnaround in form since then has been hugely impressive, beginning with Thierry Neuville’s second place finish in Sweden.

While the team has been working hard to improve its i20N in the eight-week break since Sweden, deputy team director Julien Moncet admitted that much of the focus had been around the i20’s performance on gravel - given there are only three more tarmac rallies on the calendar.

As a result, Moncet was unsure if his team would be competitive in Croatia, before going on to record a 2-3 as Tanak narrowly missed out the win, while Thierry Neuville claimed third after an eventful rally.

Hyundai’s tyre calls were spot on throughout, with the decision to take hards on Sunday a masterstroke thanks to its weather information which predicted a downpour on Stage 19.

“That was an absolutely incredible end to Croatia Rally, and we come away with a double podium result, which is very good for us after a difficult start to the season,” said Moncet.

"We struggled at Monte-Carlo, we reacted well with a second place in Sweden, and now we have a double podium, so we are showing improvements. As a team, we are hungry and we want more. We’ll keep pushing in this direction.” 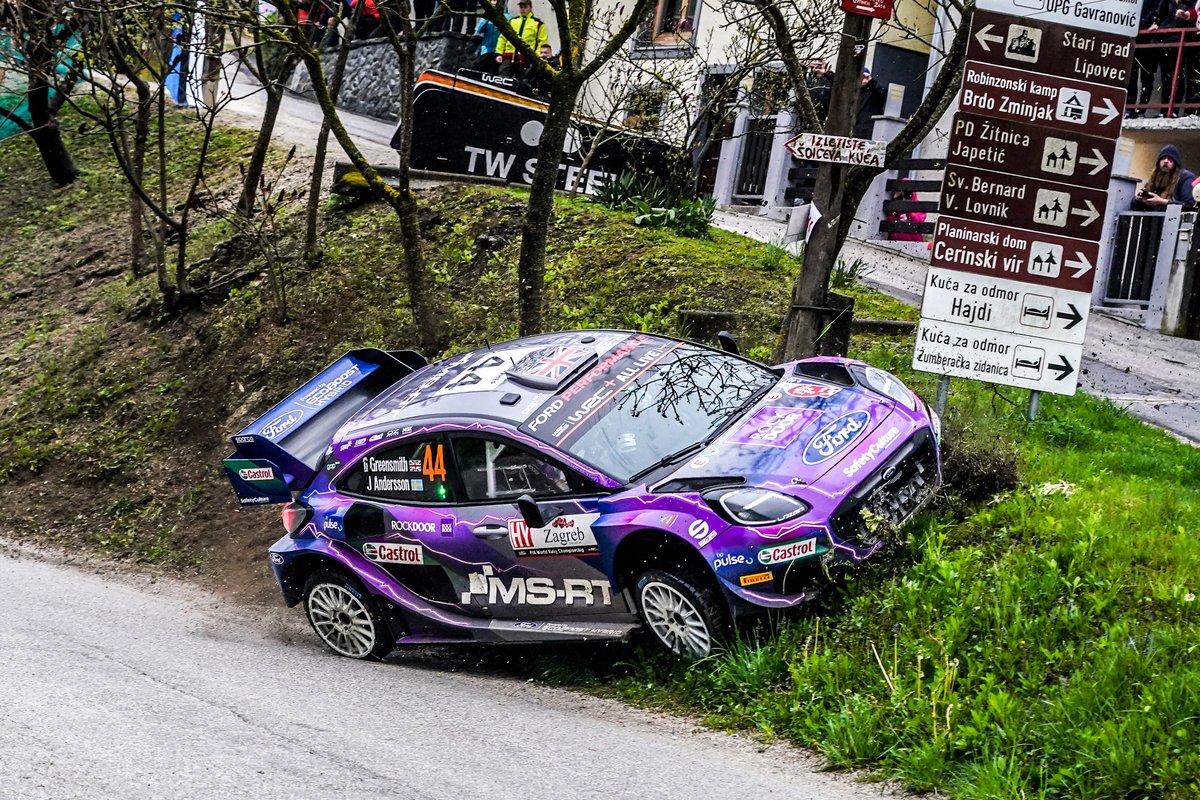 Challenging wet and slippery conditions provided several close calls across the rally. M-Sport’s Adrien Fourmaux was fortunate to emerge unscathed after a wild crash on Stage 3.

Fourmaux was caught out by standing water on a fast left hander that had already almost caught out Neuville out moments earlier. However, unfortunately the Frenchman speared through a hedge ending up in the garden of residential property. His Ford Puma suffered chassis damage, spelling a third consecutive retirement.

Team-mate Gus Greensmith managed to escape a nervous moment on the opening stage after a close call with a grass bank.

Thierry Neuville somehow managed to limp his i20 home to third after picking up a front right and left rear puncture on the final stage. Having slid wide into a ditch, he almost flipped the car but fortunately landed back on all four wheels.

Neuville managed to still claim third overall despite the crash, which came after incurring two minutes of penalties. The Belgian was handed a 40s penalty for checking into service four minutes late after he and co-driver Martijn Wydaeghe were forced to push their car 800 metres after his i20 N suffered an alternator failure.

This came before Neuville was slapped with a one minute penalty, a €1,900 fine and two days public service for being clocked driving at 156kph on an 80kph road section following Stage 4. The penalty demoted them from second to fourth overall on Saturday morning.

Hyundai team-mate Oliver Solberg and Elliott Edmondson were running in string fifth before an accident on Stage 9 ended their run, luckily emerging form their i20 N unharmed before a fire broke out.

Rally drivers are often regarded as different breed as M-Sport’s Craig Breen displayed with his enjoyment of the worst conditions he’d ever faced on his run to fourth overall.

Despite being put under pressure by Tanak in Saturday’s final stage, Rovanpera still found the time for a cheeky post-stage interview. 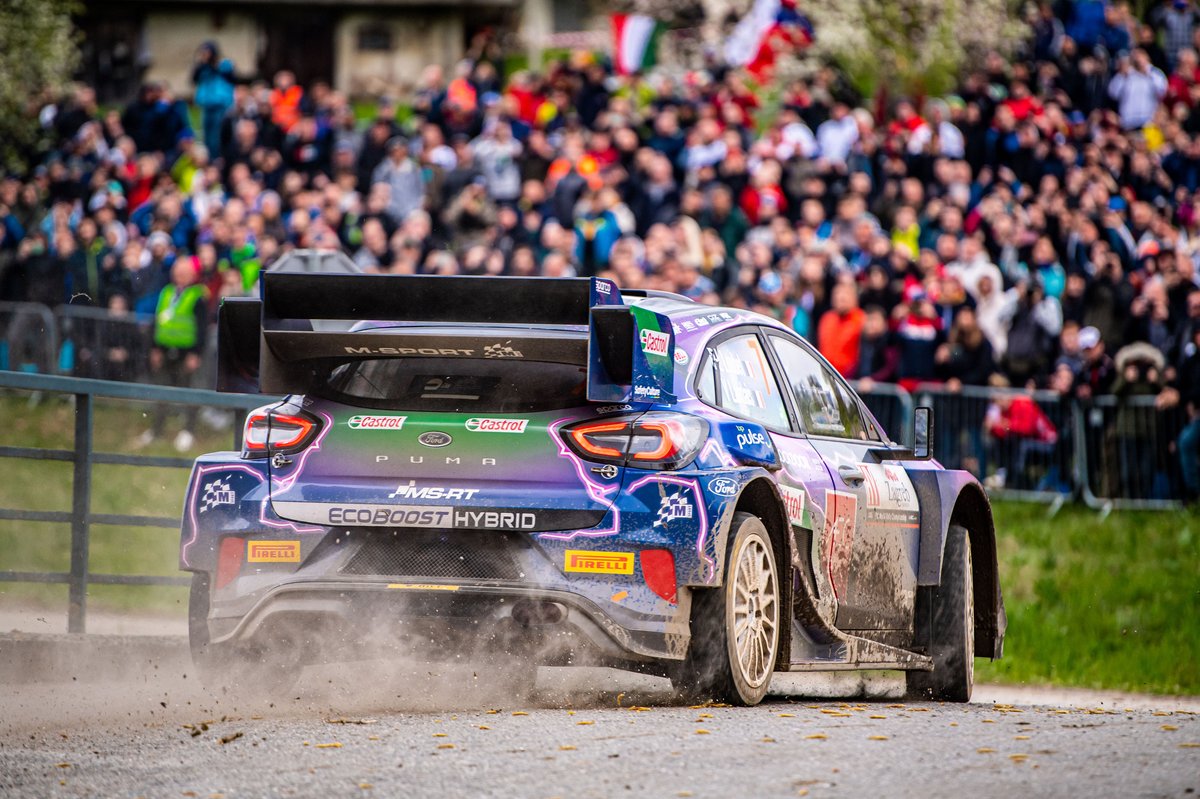 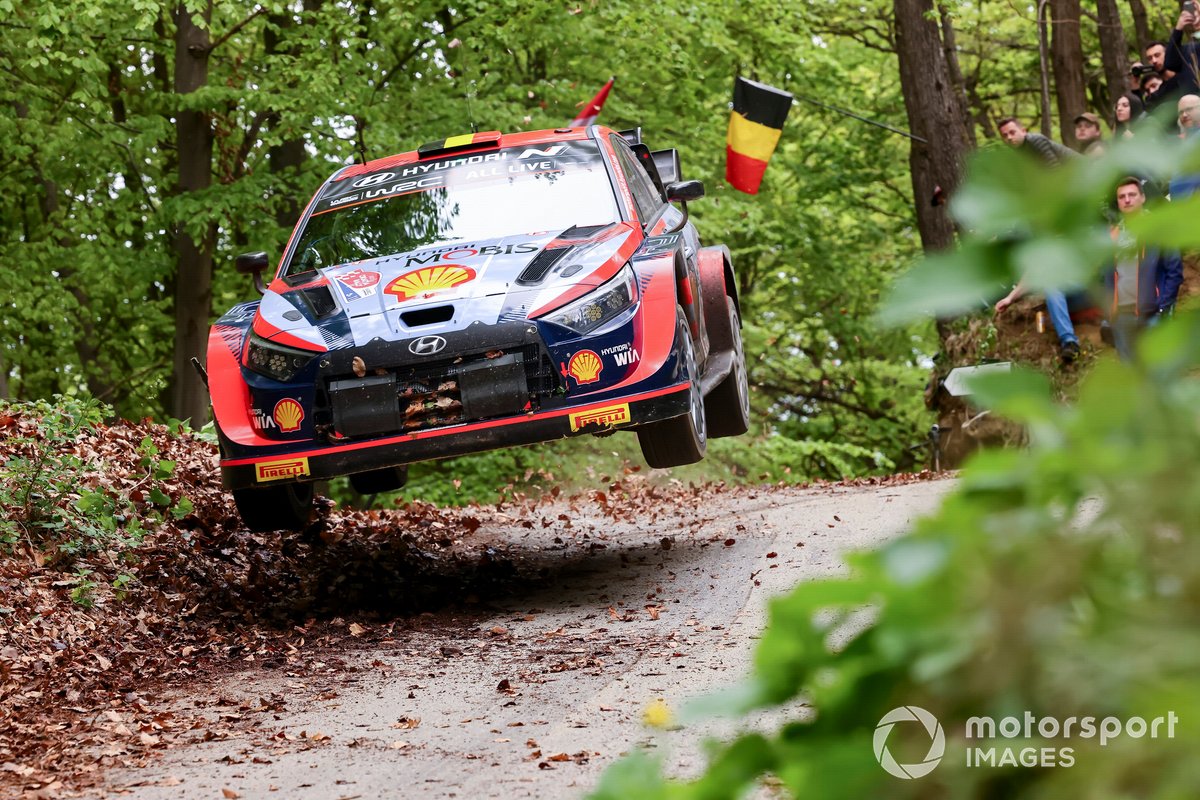 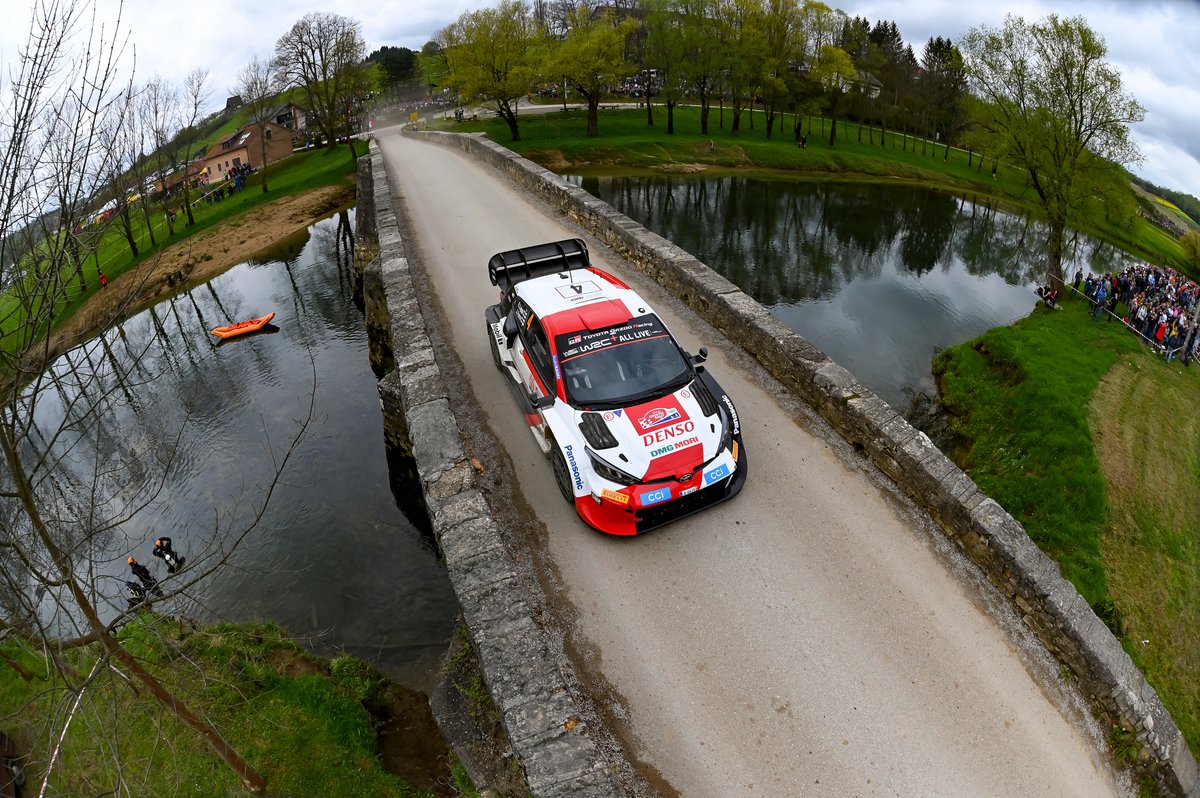 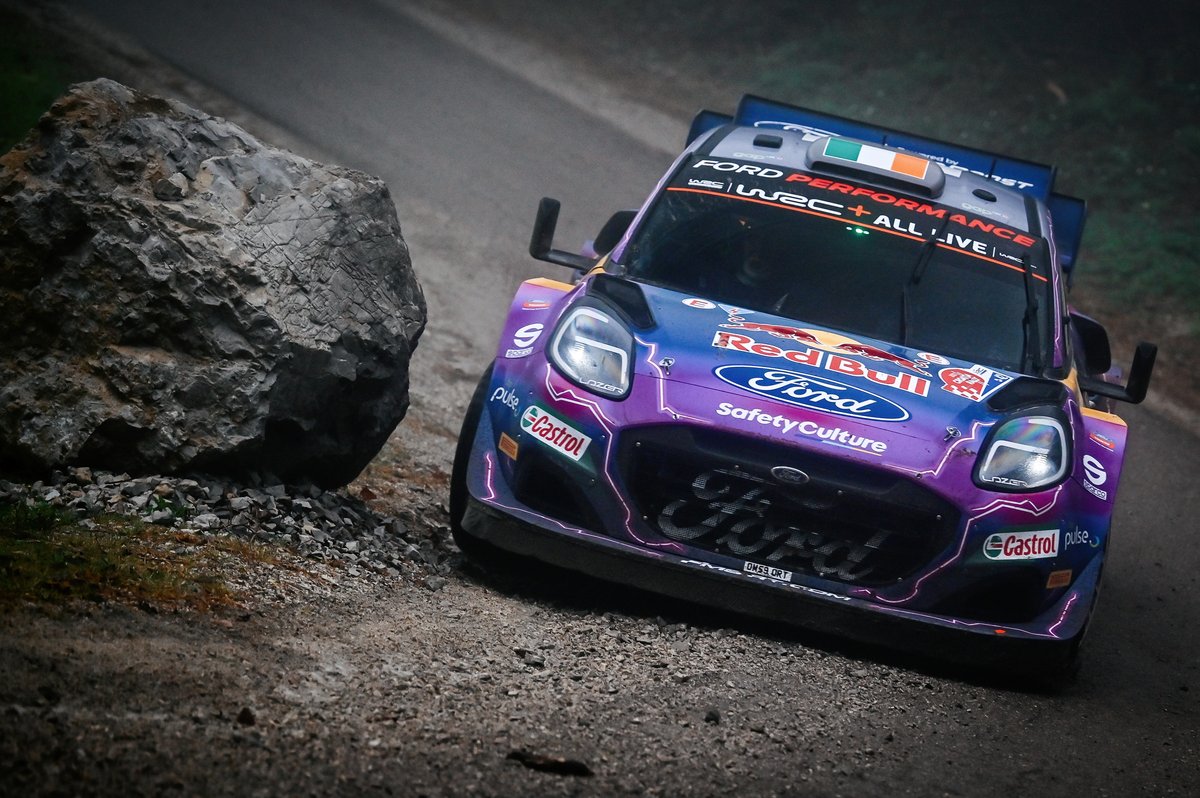 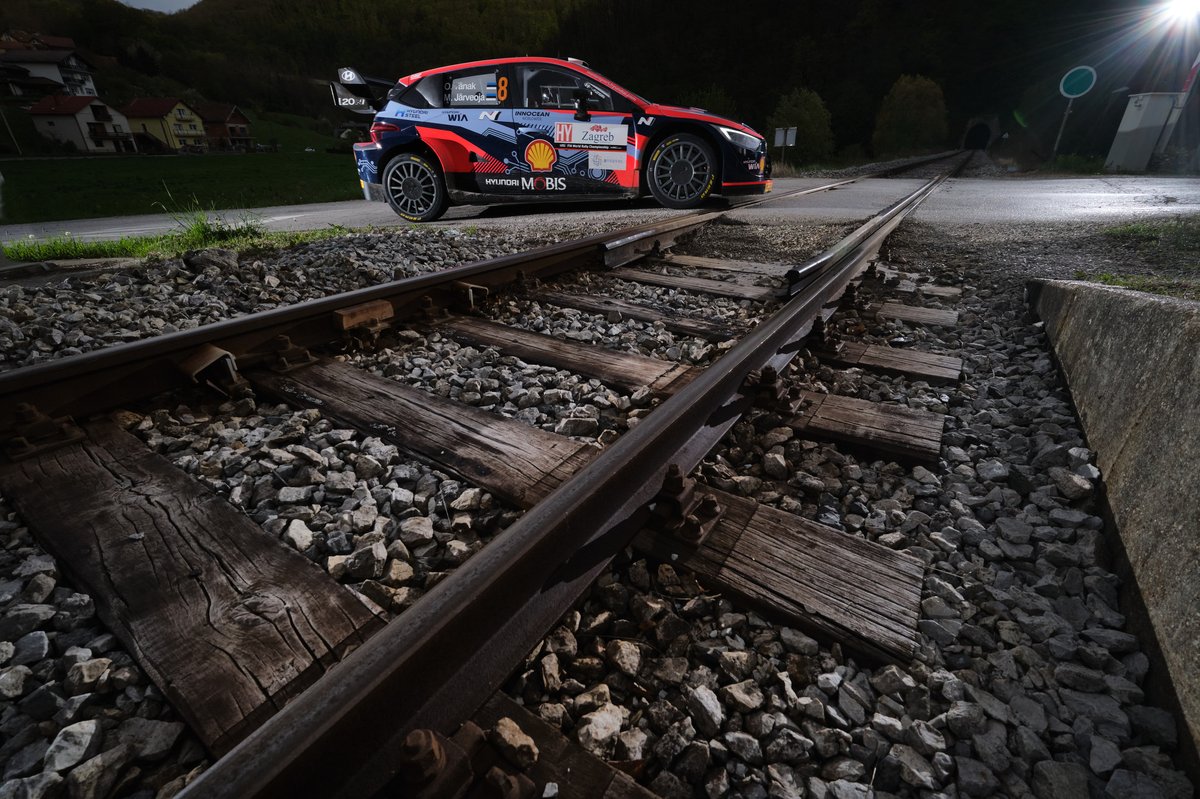