WRC Australia: Sebastien Ogier wins but must wait for title

Sebastien Ogier must wait to secure the 2013 World Rally Championship title as late drama on Rally Australia meant his dominant victory was not sufficient to seal the crown.

The Frenchman needed to out-score M-Sport's Thierry Neuville by nine points this weekend in order to clinch the championship.

That result that looked certain until the very last stage as Ogier stormed away from the outset and Neuville settled into third after a shaky Friday morning.

But then on the deciding Shipmans power stage second-placed Mikko Hirvonen picked up a puncture and lost nearly a minute.

That elevated Neuville to second, and he also took second on the power stage behind Ogier, which left the Volkswagen driver one point shy of the lead he needed to wrap up the title.

A crushing sixth victory from 10 rallies so far this year still leaves Ogier poised to become world champion on his home rally in France next month.

Citroen driver Hirvonen made it to the finish in third place, half a minute behind Neuville in the end.

With Ogier looking unstoppable all weekend, the primary interest for most of the rally was Kris Meeke's progress in his try-out with the factory Citroen team.

It started with such promise, as he topped qualifying and ran second in the opening stages.

He then slipped back to fourth before crashing on Saturday afternoon.

The Citroen was re-entered under Rally 2 for day three and Meeke was heading for 12th place only to crash again on the power stage, which he completed with his right rear wheel trailing behind the car.

Jari-Matti Latvala was off the pace on Friday and had to fight back through from eighth to take fourth place, which he held despite a final-stage puncture. 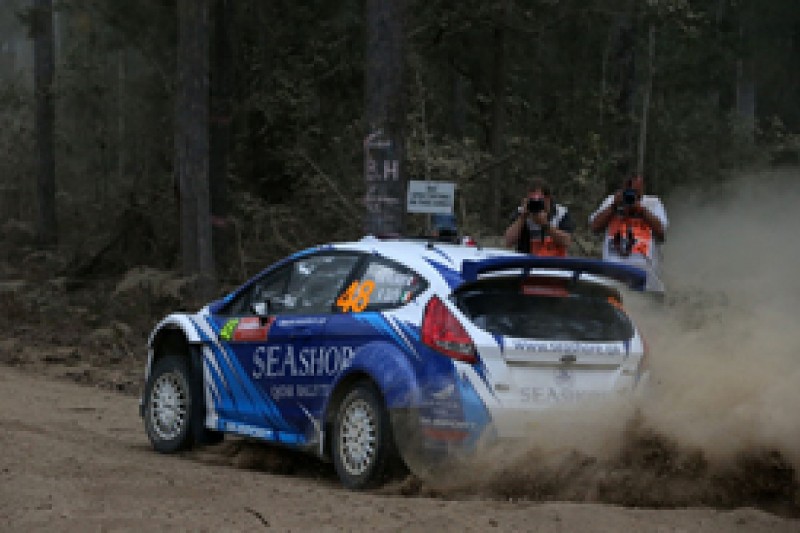 The Finn finished just ahead of Mads Ostberg and Andreas Mikkelsen, who battled for most of the weekend.

Evgeny Novikov was a muted seventh, running off the pace even before a time-consuming Saturday puncture.

Motorsport Italia brought its Mini back out for local driver Nathan Quinn and took eighth place.

Abdulaziz Al-Kuwari (pictured) won WRC 2 and reclaimed the championship lead from the absent Robert Kubica, who is competing at home in Poland in the European Rally Championship instead.