WRC Finland; The Good, The Bad and an untouchable Welshman

Rally Finland never fails to disappoint and the 70th edition of the iconic World Rally Championship certainly proved to be a modern classic. Autosport reviews the highlights, lowlights, turning points, close calls and heartbreak that made round 10 of the 2021 season.

After delivering the best performance of his WRC career to date, Elfyn Evans thoroughly deserves the Top Performer award.

The Toyota driver was simply supreme as he fended off Hyundai’s Ott Tanak and Craig Breen to win Rally Finland, becoming only the second British driver after Kris Meeke (2016) to conquer Finland’s unforgiving rollercoaster gravel roads.

Evans perhaps flew under the radar in the build up to the event as team-mate Kalle Rovanpera was labelled the favourite,  following successes on gravel in Estonia and an outstanding run to victory at the Acropolis rally last month.

However, Evans had done his homework on the pre-event test to unearth a set-up that allowed the Welshman to click with his Yaris and push to the absolute limit, which was too much for his rivals.

Evans won 10 of the 19 stages, including five consecutive wins from Friday’s challenging night stage - a first for the event since 1994 - to a sweep of Saturday morning’s stages. Despite relentless pressure from two-time Finland winner Tanak in particular, Evans not only held his nerve but drove away and claimed full points by winning the Power Stage.

It was a performance the modest Evans admitted was his best. It was a coming of age of the 32-year-old and has breathed new life in the championship with only 24 points the gap to seven-time champion Sebastien Ogier, who finished a subdued fifth.

“It feels pretty special to win for the team on its home rally, “said Evans. “After a difficult rally for me in Estonia on roads with similar characteristics, it feels really good and especially the way we managed to do it.” 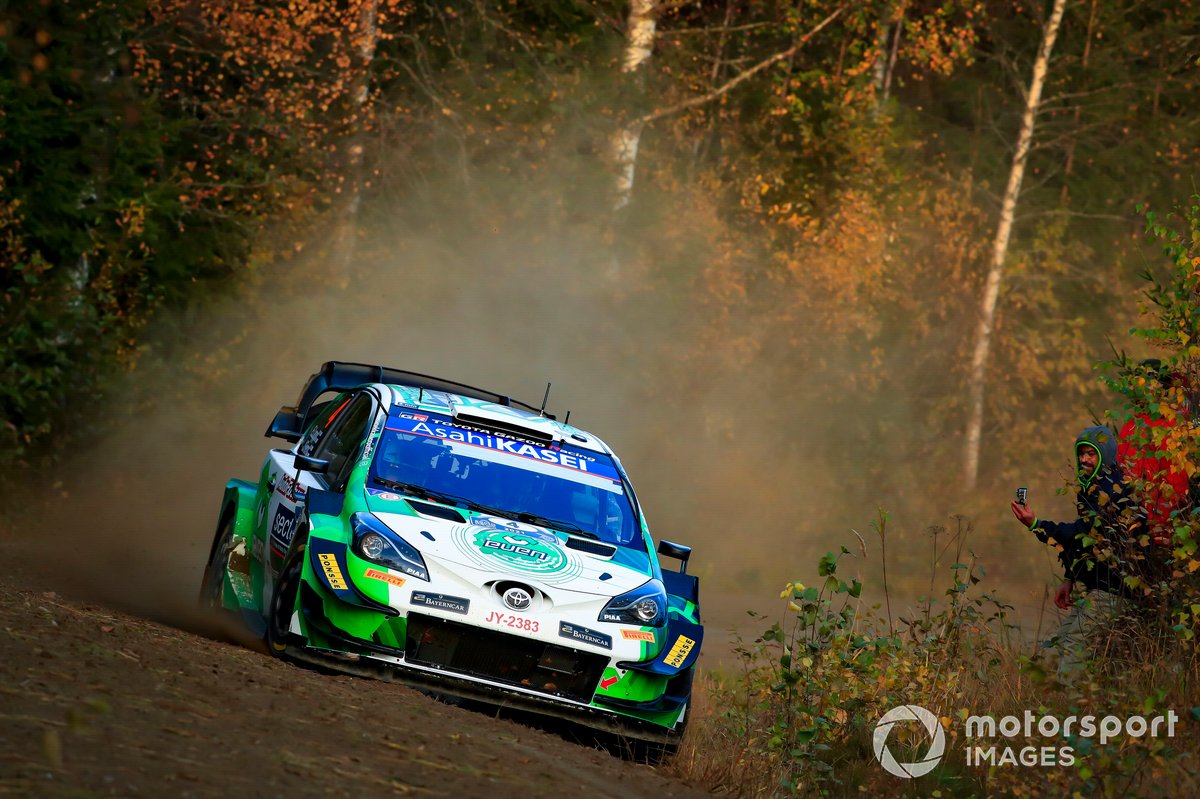 The Hyundai duo of Tanak and Breen deserve a mention for putting Toyota under serious pressure in their backyard where the Yaris was born and developed. For Breen, a third-place finish was a third consecutive WRC podium marking the best streak of his career.

Likewise, Toyota wildcard runner Esapekka Lappi deserves praise for his run to fourth on his WRC return after 10 months away. 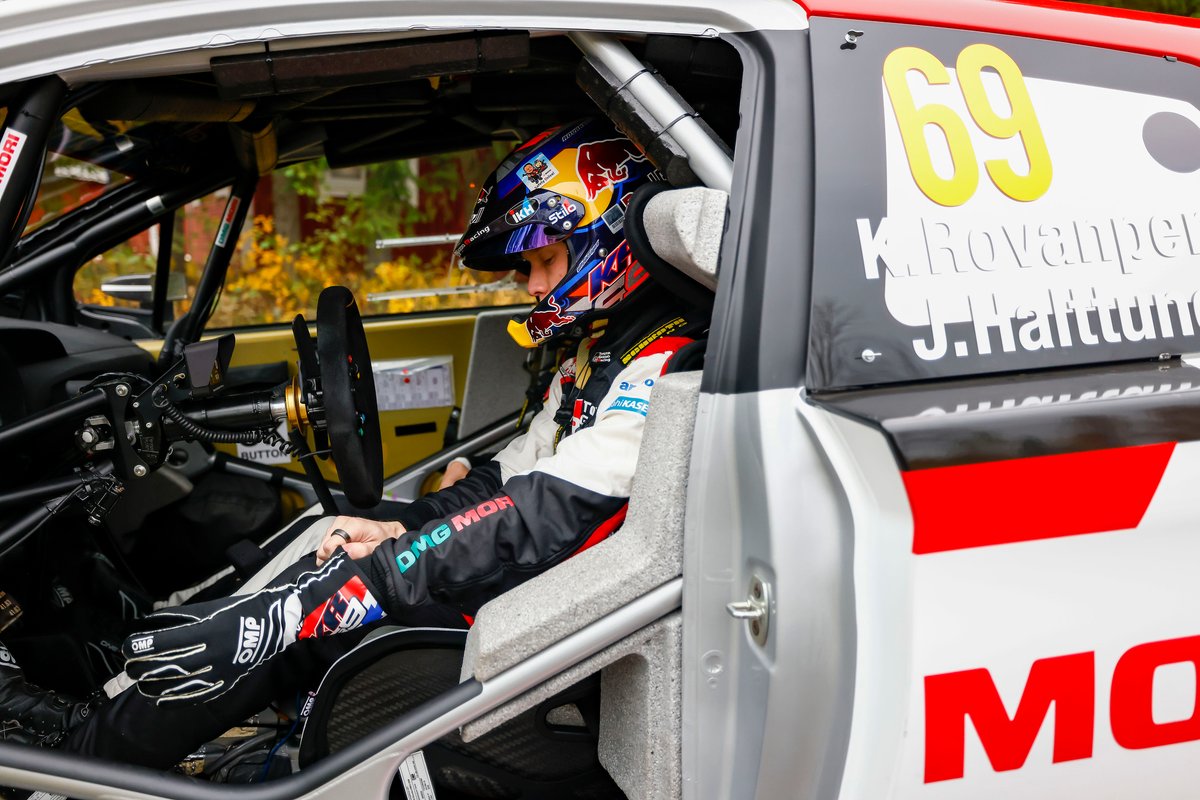 Finnish rally fans have been craving a new rally hero and it would have been the perfect fairytale had the new flying Finn Rovanpera secured a memorable home win on the event’s 70th anniversary.

However, it wasn’t to be this year for Rovanpera on his first full WRC start at one of rallying’s classics while carrying the weight of a rally mad nation on his shoulders.

Rovanpera, who turned 21 on Friday, struggled for outright pace but was still in the mix holding fourth when his hopes came to a halt in the shape of a pile of gravel. He lost control of his Yaris by running wide into a ditch and in trying to correct the tankslapper he careered head on into a mountain of gravel protecting a telegraph pole.

Luckily, he emerged relatively unscathed with only some soreness and back pain. It wasn’t the dream result he would have hoped for but there is no doubt he will surely win this event in the future.

“Sadly this year’s Rally Finland didn’t pan out as we had hoped,” said Rovanpera. “We had our hopes high for our first Rally Finland with a WRC car, but it just didn’t work out.” 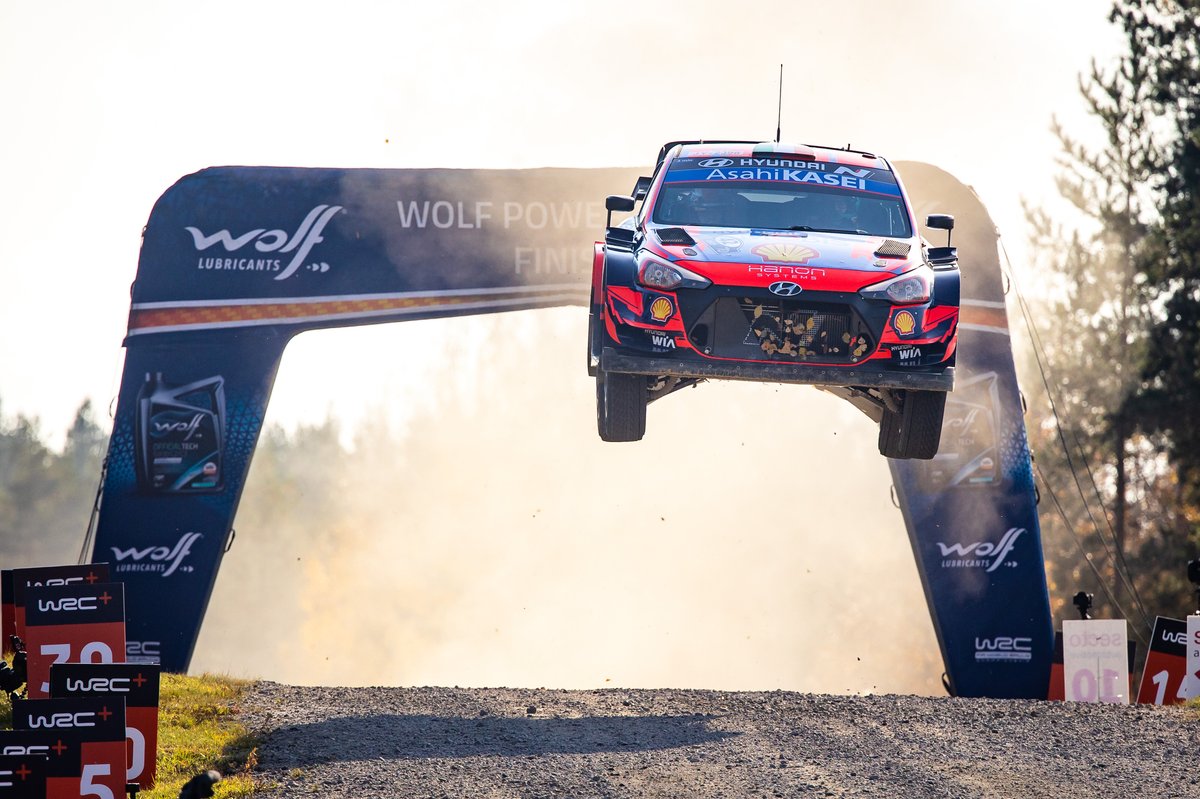 Team of the Week – Hyundai

Finland has proved a bogey venue for Hyundai having never recorded a podium, so to bag two rostrums was something of a turnaround in fortunes for the Korean marque.

Boasting a perfect record at Rally Finland since returning to the WRC in 2017 and based in the rally’s host city Jyvaskyla, Toyota were the overwhelming favourites.

However, Toyota were left stunned on Friday as Hyundai fronted a much stronger showing than anyone predicted to end the day with a 1-2 as Breen headed Tanak.

“We were a bit worried on Friday when we started and it didn’t look that strong in the beginning but then Elfyn found another gear in the darkness and since then we were in a much better zone,” said Toyota WRC boss Jari-Matti Latvala.

“Of course, it is our home rally and we have been very strong with Toyotas but clearly we could see Hyundai has done great steps with the car and the performance is higher.

It took a stunning display from Evans to keep Toyota’s perfect record on the Yaris’ home turf.

A double podium for Tanak and Breen certainly outlined the progress made with the current i20 as it prepares for retirement at the end of the year.

The feat was not lost on Hyundai boss Andrea Adamo stating: “We have come to Finland, a rally where we have never been competitive, where we’ve always struggled, and we have fought for the win right until the end.

“I don’t think anyone was expecting us to be so close to the win, with two cars in the podium positions.”

Finland’s high-speed, undulating ribbons of gravel punctuated with hidden crests and jumps can bite hard as Oliver Solberg can testify.

The Hyundai WRC2 driver were sitting fourth in class when their i20 bottomed out which sent the car into a ditch and then into a frightening roll. Luckily Solberg and new co-driver Craig Drew were unharmed in the incident.

Toyota’s Takamoto Katsuta was also lucky to avoid a huge crash when losing control on a sixth gear corner. Amazingly the Japanese was able to save a 360-degree spin that followed and carried on.

Katsuta’s luck did run out on Stage 8 when he clipped a tree that forced him into an early retirement.

M-Sport may have had a quiet Rally Finland but Adrien Fourmaux lit up the Power Stage with this 68 metre leap.

This was the last gravel event for the current generation WRC cars and I think it's safe to say we are going to miss them. 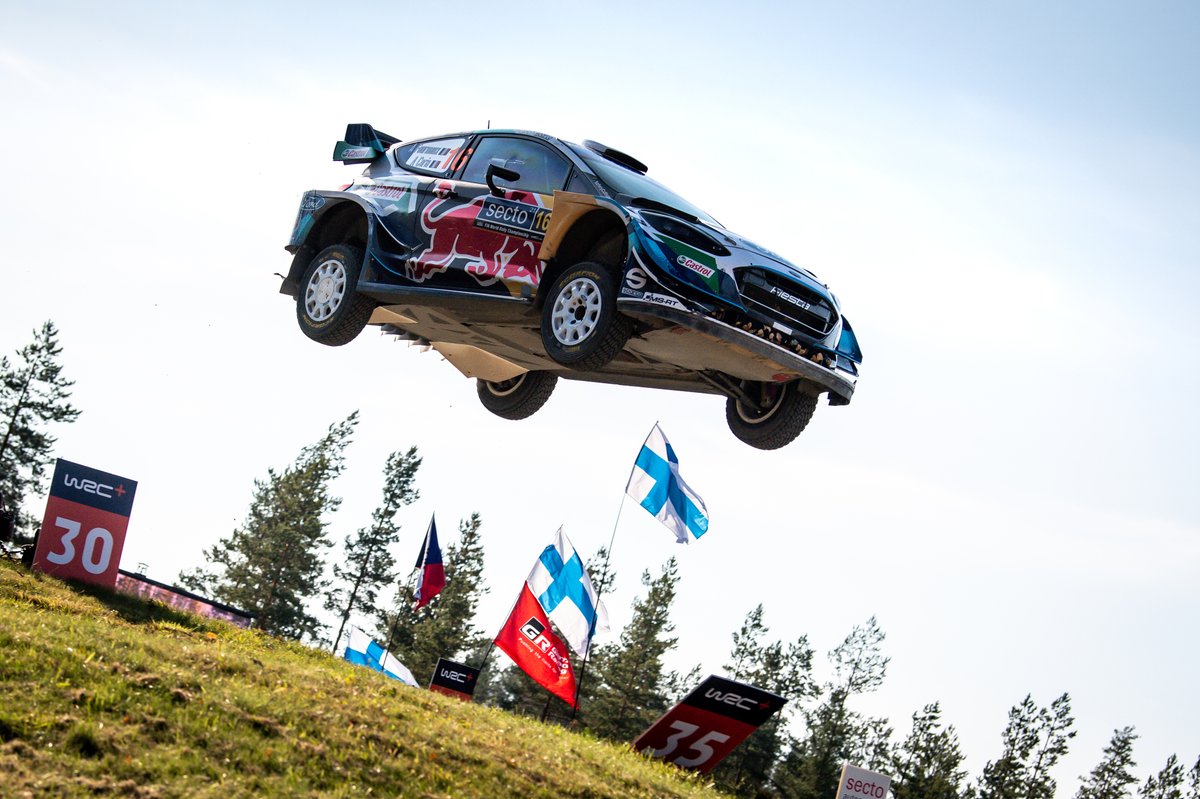 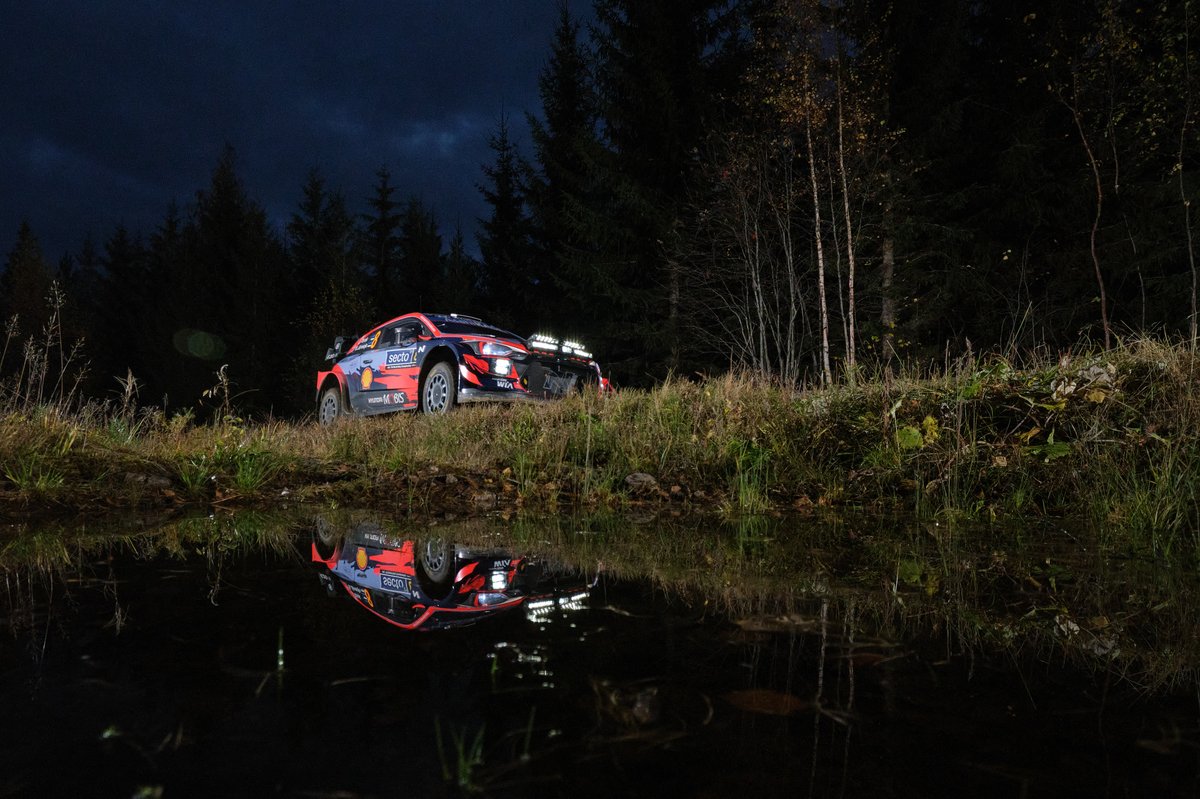 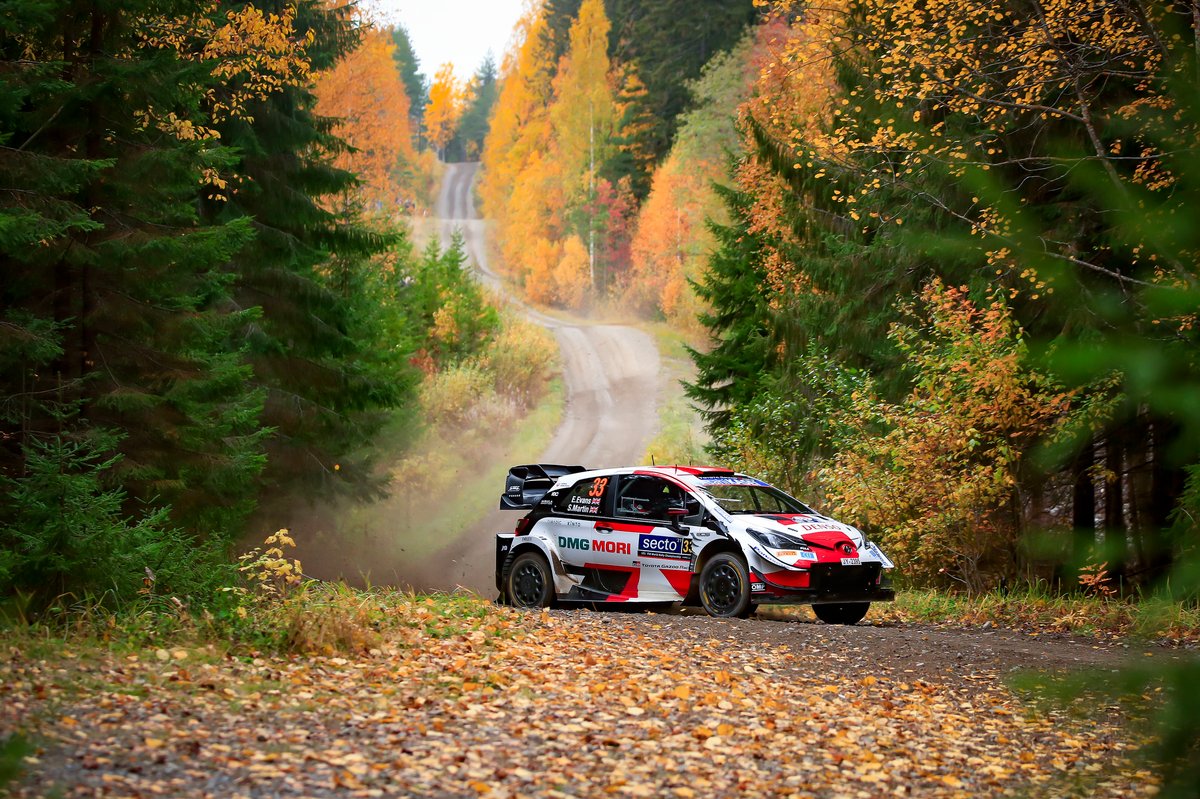 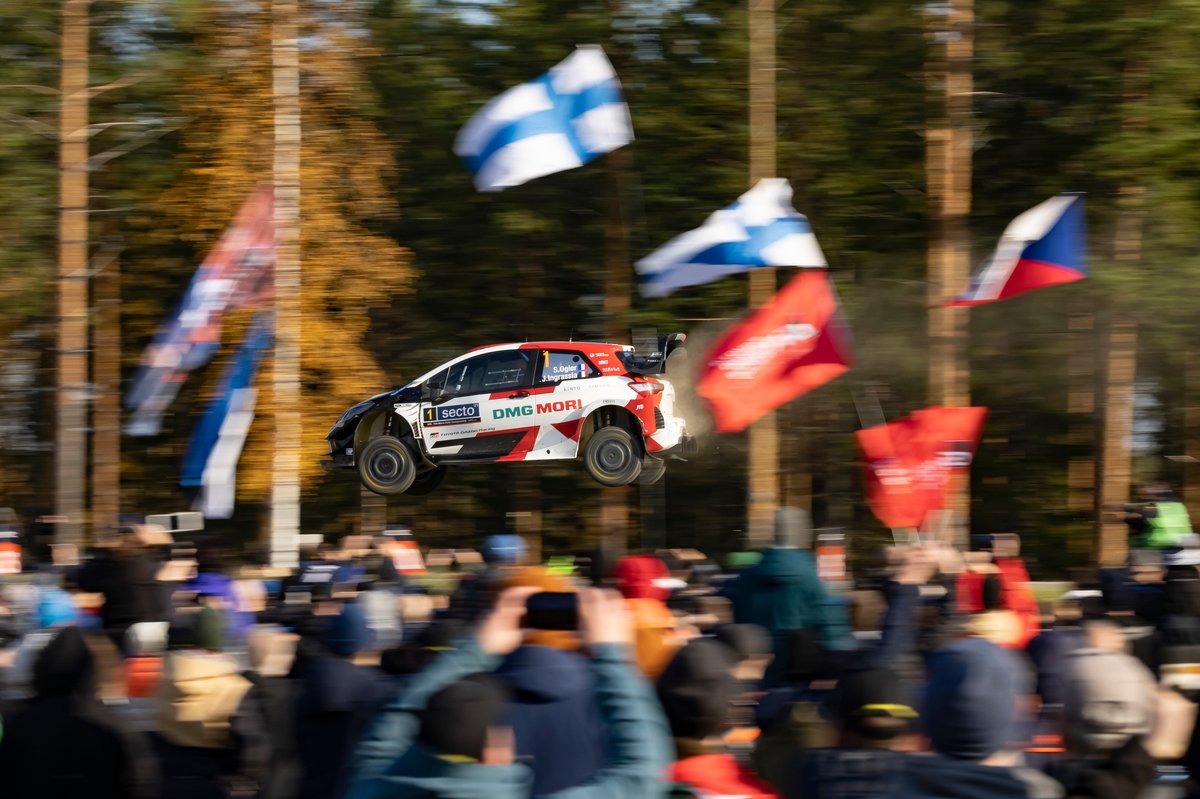 If anyone needed any proof of the commitment required to conquer Rally Finland, then this onboard from winner Elfyn Evans sums it up perfectly.