The 2019 world champion came out of the blocks fast, sweeping a quartet of tricky hot, rough gravel stages to hold an early 16.9s lead over Hyundai team-mate Dani Sordo.

Two-time Sardinia winner Sordo, who had been struggling with a tyre problem, was elevated to second after Toyota’s Rovanpera hit trouble in the second pass through Terranova. The Finn damaged his front right suspension and ground to halt on stage.

Sebastien Ogier, who impressed despite the championship leader being the road sweeper, was third 18.7s adrift of the rally lead.

It proved to be a difficult morning for Rally Portugal winner Elfyn Evans who struggled for confidence and was 41.5s back in sixth, behind Thierry Neuville, who fought back from a tough opening two stages, to grab fourth ahead of Takamoto Katsuta (Toyota).

However, it was an even worse start for Suninen, who rolled in the opening stage ending his day prematurely in one of two M-Sport Ford Fiestas.

First blood went to Hyundai’s Tanak as he stormed through the first run through the narrow rough gravel roads of Filigosu (22.29km), the longest stage of the rally.

Tanak, running fourth on the road, took the stage by 1.6s from Toyota’s Rovanpera while Ogier impressed despite being the road sweeper to end up third 9.6s adrift.

Ogier’s impressive run was contrasted by the struggles Neuville and Evans had as the pair lost 16.7s and 17.3s to Tanak.

It proved to be a disastrous start for M-Sport’s Suninen on his return to the top class as he crashed out on the opening stage.

The Ford driver rolled his Fiesta after entering a right hander too fast which resulted in the Finn drifting wide and rolling down a bank. Both Suninen and co-driver Mikko Markkula were unscathed and managed to roll the car, that was relatively undamaged, back onto its wheel, but they were unable to rejoin.

“It's unfortunately game over for us for today at Rally d’Italia,” posted Suninen on Twitter.

“We slid off the road on SS1 and were stuck. The car needs to be recovered, and hopefully we will be able to continue tomorrow.”

Tanak’s charge continued in Stage 2 Terranova (14.36km) this time 1.4s quicker than Ogier, who again starred despite his road position, while his title rivals Neuville and Evans struggles resumed.

Rovanpera was third despite a stall while Evans lost another eight seconds but it was ever worse for Neuville, who dropped 12 seconds to his team-mate.

“We didn’t have a good rhythm and there was dust hanging,” said Neuville.

“I’m not able to drive the car fast and not confident in the handling and that is where we are losing the time.”

Evans added: "I am struggling with the overall confidence. It's not working so well this morning.”

Tanak took a hat-trick of stage wins in the second run through Filigosu edging Sordo by 1.2s, who encountered tyre issues, while Rovanpera was eight tenths further back in third.

"I have a problem before with the tyres, and I had a little bit of issue with the tyre again. I have to be careful now - I didn't push like crazy,” said Sordo. 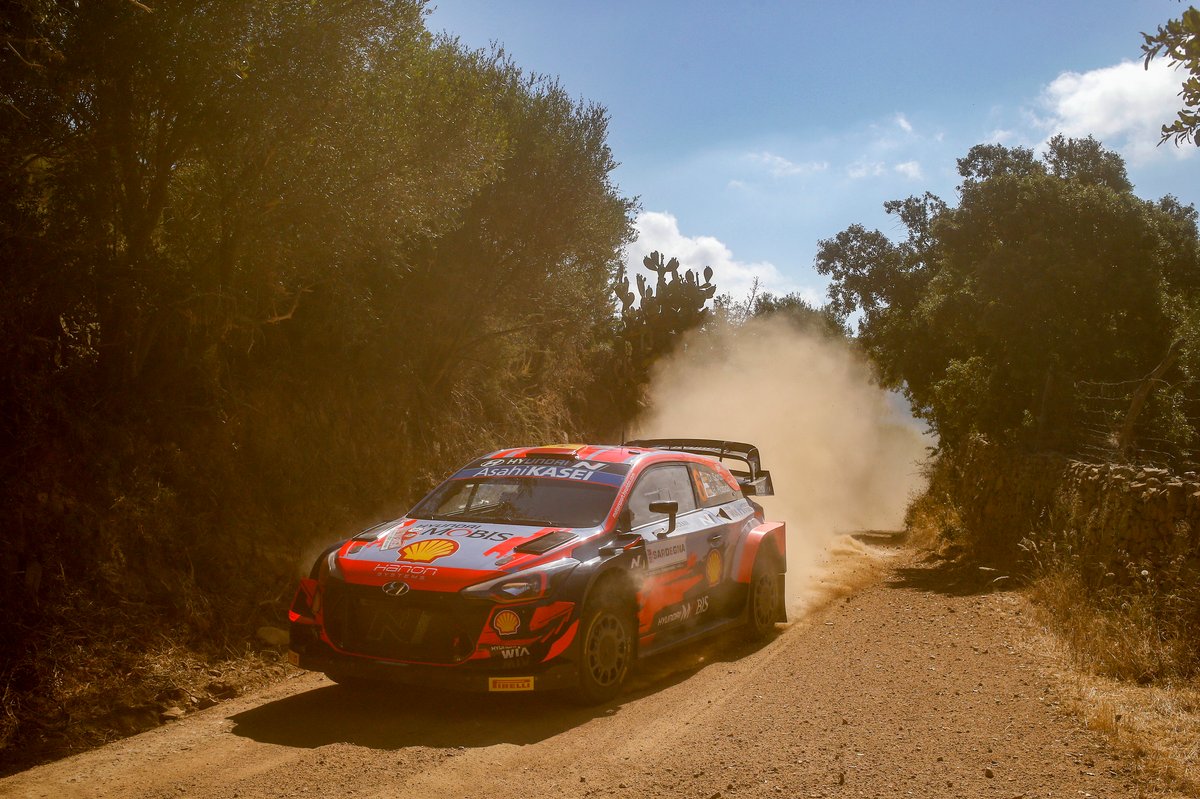 Neuville issued a much needed response to stem the low of time in fourth just 3.5s shy of Tanak.

Ogier punched in a solid time for fifth while Evans showed signs of a recovery in sixth.

Tanak completed the a clean sweep in stage four by pipping Sordo by 1.4s with Ogier a tenth back in third.

Behind, there was drama as Rovanpera slowed before stopping with front right suspension damage while Toyota team-mate Katsuta lost 10s after hitting a bale.

In WRC2 as Mads Ostberg (Citroen) blitzed the morning stages to lead Finn Jari Huttunen (Hyundai) by 21s, after rival Andreas Mikkelsen rolled his Skoda in the final morning stage, dropping more than three and half minutes.

American Sean Johnston also rolled in the opening stage ending his charge, while M-Sport’s Adrien Fourmaux hit a rock and bounced into a ditch. The French rising star damaged his suspension and it is hoped he will return to action tomorrow.