Thierry Neuville became the first man to outpace Evans on a Saturday stage when he won the second running of Dyfi, but the runaway rally leader was still second quickest and maintained a 47.9s advantage in his DMACK Ford.

Tanak is now 14s adrift of Neuville in third, with Ogier coming back at his team-mate on Dyfi and closing to within 3.3s.

Neuville and Tanak both need to outscore Ogier by eight points in Wales to keep the WRC title fight alive until next month's Australia finale. 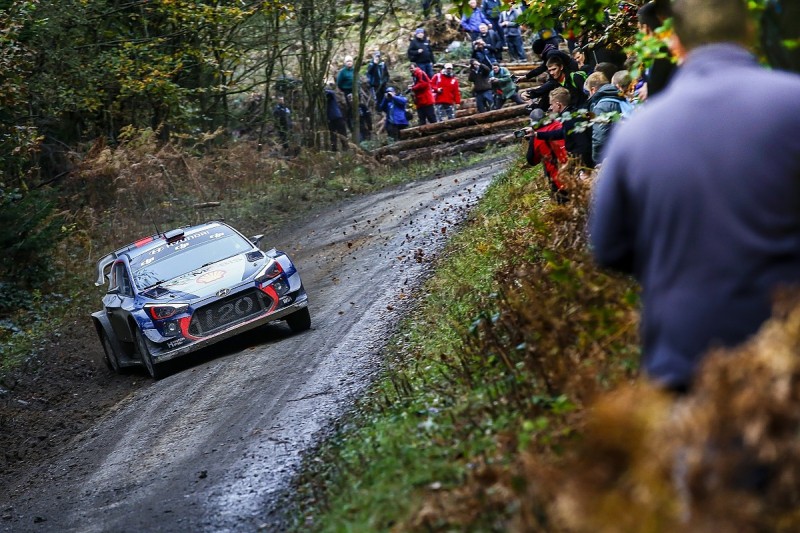 They are not on course to do so in their present positions, though the bonus points available on Sunday's powerstage finale could swing it.

While Jari-Matti Latvala remains fifth for Toyota, he felt he was driving at the absolute limit on the increasingly wet and muddy stages after the regroup and is now only 1.6s ahead of Andreas Mikkelsen's closing Hyundai.

Kris Meeke is still in touch with this pair despite losing the top part of his Citroen's rear wing on Gartheiniog. He admitted he had not felt the reduction of downforce.

Eighth-placed Hayden Paddon suffered hydraulic problems on Dyfi but was able to stay ahead of his Hyundai team-mate Dani Sordo and Toyota's Juho Hanninen.

The field is now embarking on a long road section into England to contest the Cholmondeley Castle spectator stage, before returning to Wales for two night stages.

Organisers have appealed to fans to heed marshals' safety instructions after the second run of Dyfi was nearly cancelled and eventually started late due to issues with spectators.