Thierry Neuville won the final round of the 2017 World Rally Championship as his closest challenger, Jari-Matti Latvala, crashed out of second place on Rally Australia's Power Stage

Neuville beat Ott Tanak, who jumped into second place after Latvala's error, by 22.5 seconds to claim his fourth victory of the season.

Neuville's team-mate Andreas Mikkelsen led the rally overnight on Friday in only his third outing with the team, winning five of the opening six stages.

However, Mikkelsen's chances of repeating his 2016 victory at this event evaporated when his i20 suffered a double puncture on the second stage of the Saturday morning loop.

He only carried one spare tyre and the Norwegian was forced to retire, promoting Neuville into the lead of the rally.

The Belgian fended off his main challenger Latvala for the remainder of the rally, which included being 32.2s off the pace on Bucca - Sunday morning's second stage and left Neuville just 9.9s clear of Latvala.

Crucially, Neuville responded with the fastest time on the next stage, bolstering his lead by a further 4.8s after what he labelled as a "clever" drive in damp conditions. The penultimate stage of the day was cancelled because of the bad weather.

This left the Power Stage as the sole test following the Sunday service break, and in a heartbreaking twist, Latvala clipped the inside of a long left-hander and flew into a tree, instantly ending his rally and handing second place to Tanak on his M-Sport swansong. 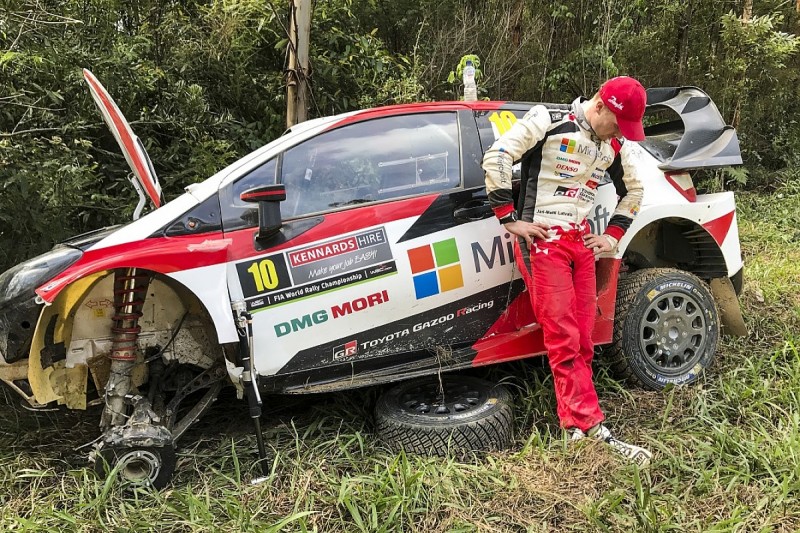 Rally Australia will be one Citroen would rather forget with all three cars hitting major trouble.

Kris Meeke ran as high as second on Friday but broke his right-rear suspension when he hit a bridge on SS12.

He retired but rejoined under Rally2 for Sunday along with Mikkelsen and the sole WRC2 entry of Kalle Rovanpera.

Craig Breen had been set for fourth place before he rolled his Citroen C3 into retirement in dramatic fashion on SS18.

The third Citroen of Stephane Lefebvre clipped a tree and retired on the stage prior to Breen's roll.

With Latvala, Meeke and Breen hitting trouble, Hayden Paddon seized the final place on the podium, which marks only his second top three finish of 2017.

Sebastien Ogier, who sealed his fifth WRC crown last time out in Wales, finished the rally in a distant fourth position but pipped his departing M-Sport team-mate Tanak to maximum points on the powerstage.

His rally was riddled with gearbox issues, a one-minute time penalty for arriving at a stage too early, and a general lack of rhythm or speed in his Fiesta.

He bemoaned the "horrendously bad" grip on his DMACKs all weekend but avoided any major dramas to secure 10 points in what is expected to be his final rally with the tyre manufacturer.

Esapekka Lappi suffered a three-minute delay on the opening day due to a power steering issue and failed to recover the lost ground, ending the rally in sixth place ahead of the recovering Meeke.