The C3 WRC led for 15 out of 17 stages on the rough roads around Marmaris last weekend, with Ogier leading home team-mate Esapekka Lappi - the Finn securing his second runners-up spot in three rallies following a similar result at home in Finland.

A disappointing Rally Germany performance - where Ogier and Lappi finished seventh and eighth after suffering with understeer - remains fresh in the team's mind, however.

Ogier told Autosport: "We win today and I'm of course happy for the weekend we had.

"We had a very strong car, very reliable and the pace wasn't bad. "But not all is right straight away. "It is very encouraging but we need to keep working hard.

"We still need to find more pace." Ogier admitted to some straight talking with the Versailles squad, after he said he found the C3 'undriveable' in Bostalsee.

The six-time world champion pointed out that last week's victory - his third of the season following wins in Monte Carlo and Mexico alongside co-driver Julien Ingrassia - hadn't come courtesy of work completed since Germany.

He added: "I think there is not many changes have happened in these three weeks to be honest.

"After Germany I had a discussion with the team and I said that it is at this moment we need to stay strong together, work even harder.

"The team has started to do more and realise we need to make a bigger push. "This weekend is not the result of that yet, but it is coming in the right direction to motivate everyone even more.

"We can enjoy this one now."

Ogier was also quick to pay tribute to Lappi, who led for nine of Turkey's 17 stages.

"They have done a great rally," said Ogier on Lappi and co-driver Janne Ferm.

"I would love to fight with him.

"Maybe in the future we fight for the title together. Maybe next year.

"It was nice to have the back-up and great to have a one-two for the team. It was very needed also."

Victory for Ogier moves him into second place in the championship, where he sits 17 points behind Ott Tanak ahead of next month's Wales Rally GB - a rally he has won five times in the last six starts.

However, Ogier's wins came with Volkswagen and M-Sport Ford.

His switch to Citroen means he drives a car that hasn't taken a podium since the current regulations were introduced for 2017. 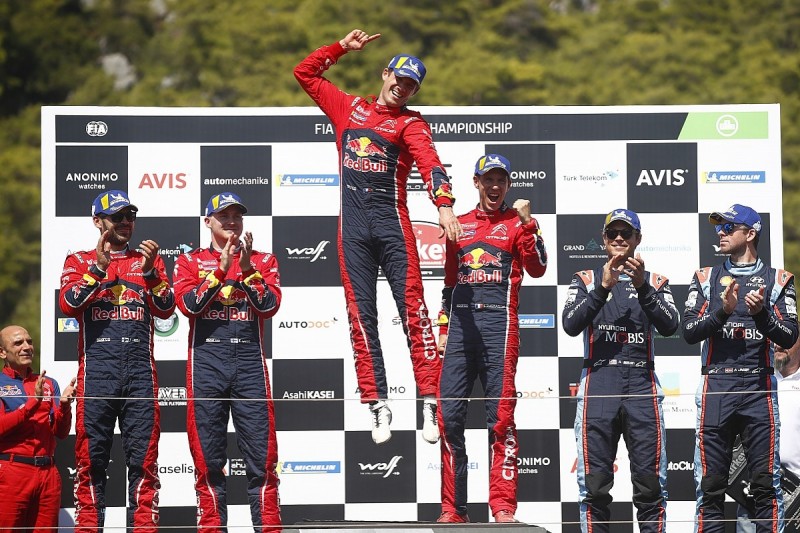