Hyundai Motorsport has revealed that major updates to resolve fundamental issues with its i20 N will wait until October at the earliest, with minor upgrades brought to WRC Rally Finland.

The South Korean manufacturer has endured a difficult start to the WRC’s Rally1 hybrid era after a combination of factors left the marque playing catch up with the development of its new challenger.

Hyundai's late commitment to the regulations has proved the biggest factor, resulting in a rush to prepare its cars for the 2022 season opener having conducted very little testing and development.

The i20 N's reliability has proven to be a significant issue but in Estonia last month drivers Ott Tanak, Thierry Neuville and Oliver Solberg all struggled for confidence and outright speed on smooth gravel.

The team has conducted a pre-event test at its new Finland testing ground to help iron out some of the issues that can be resolved in tweaks to set-up.

Hyundai has managed to bring some upgrades to this weekend's Rally Finland but deputy team director Julien Moncet says a major update, that will require a homologation joker to be used, won’t come online until October, and may even be delayed to early next year.

“We are already there. I think we will, push to move along the cars this year and continue working on the development. If you look at the championship it is a bit tricky so I think we have to focus on developing the car."

Asked when it would be likely to see a major update, he replied: “It will be October or early next year, yes, because even if you apply for jokers this year and get the homologation you are not obliged to use them now, but you have to use them by January 1 next year. The latest, it will be Monte Carlo where will will have a bigger package. 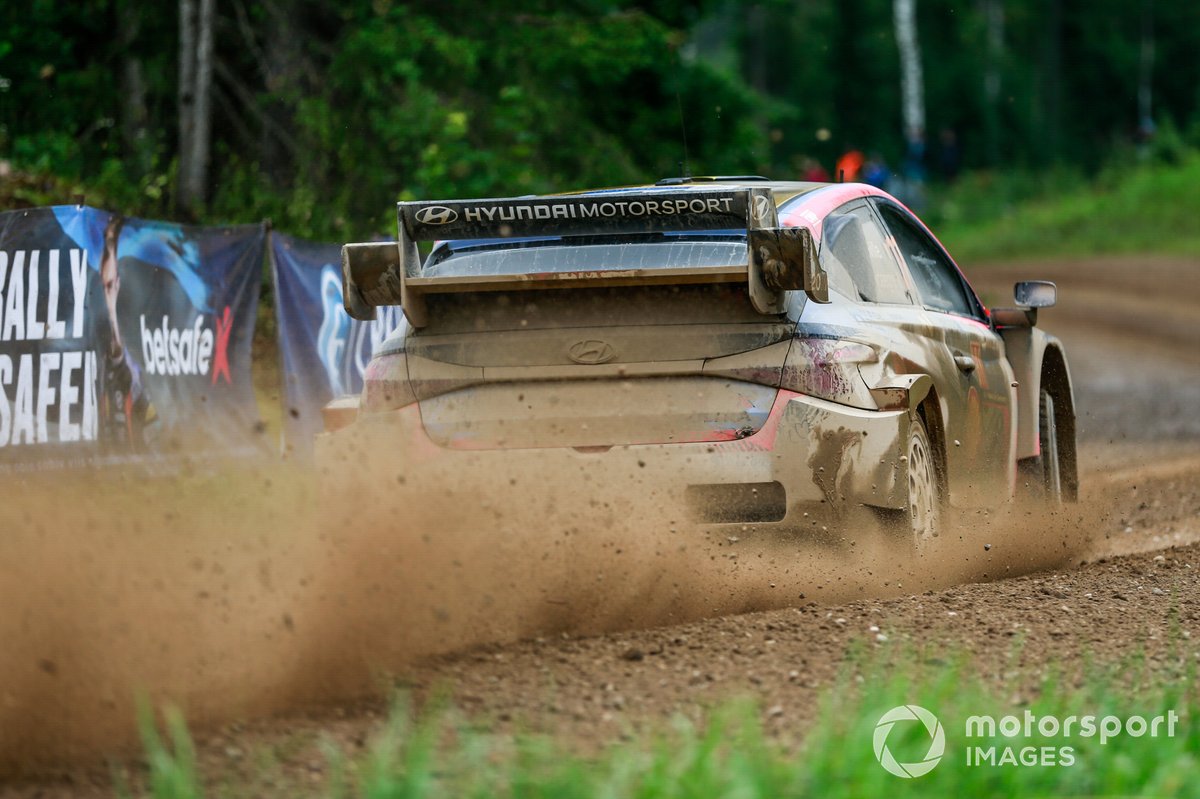 “We come to Finland with some set-up adjustments and some tweaks here and there so let’s see what we can achieve here.

“It will be difficult as Toyota are the favourites here but I think we can target a podium and maybe something more.”

Looking ahead to Finland’s fast and undulating gravel roads, Neuville is reasonably confident work completed in the pre-event test will bring the team closer to the front running pace.

The Belgian is currently sitting second in the championship, some 83 points behind runaway leader Toyota’s Kalle Rovanpera, who will be competing on home soil this weekend.

“Estonia was probably, the biggest gap we have had so far and maybe it was bigger than expected," Neuville told Autosport.

“I’m not sure we took the maximum out of the car to be honest that is why I think this weekend my feelings after the pre-event test that we should be closer.

“If we are, then it is a good step in the right direction, If we are much closer, then it shows we were really wrong in Estonia. To be honest I don’t know.

“On the set-up we have done what we could but is it good enough? I don’t know.

“We have made some changes and I was able to gain much more confidence, but at the same time I was complaining about the lack of precision, and precision and confidence is what you need to go fast. It is something I’m missing but it is something my team-mates are also missing.”

Rally Finland will begin this evening with the first of 22 competitive stages.