During his election campaign and in the weeks leading up to his inauguration as president, Trump underlined his desire to impose tighter controls on movement between the United States and Mexico and that policy had an immediate impact on the value of the Mexican Peso, which fell to a record low against the US dollar.

That resulted in a rise in supply costs for Rally Mexico organisers, and combined with the loss of Volkswagen as the event's principal sponsor is understood to have taken the Leon-based event to the financial brink.

Rally director Patrick Suberville denied the event was ever in doubt, but said Trump's election did not help preparations.

"The whole Trump story caused the currency to devalue by 40% in one week," Suberville told Autosport.

"Most of the things we use [in the rally] come from the US and they suddenly became a lot more expensive.

"The event was in trouble this year because we lost our main sponsor three months prior to the start; we learned that Volkswagen pulled out when we were on our way to sign the contract with them.

"The government helped us out. They saw we were in trouble and they helped us do this." 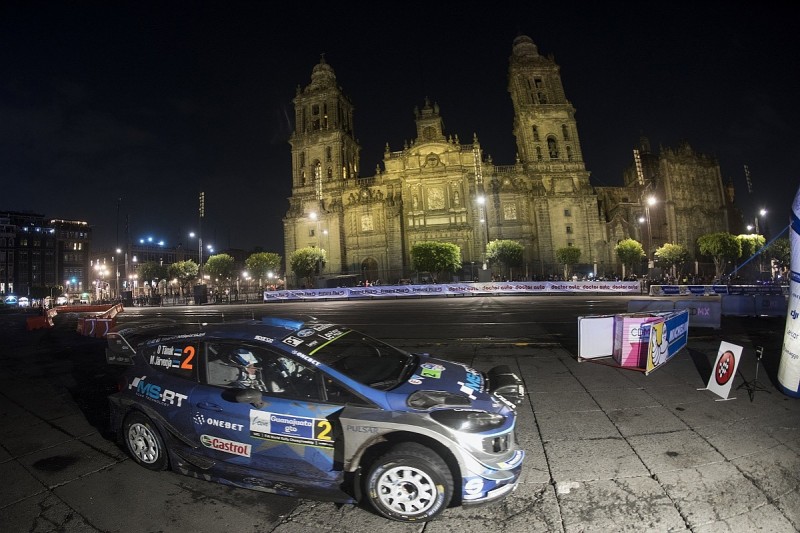 The event did not run without difficulties, with some complaints aimed at organisers for running the opening stage in Mexico City - 250 miles from the event base.

The mile-long test in the Zocalo square, which was funded by the Mexican government, was criticised for its late start time as well as the logistics involved in its hosting - with those complaints growing when the first two proper gravel stages had to be cancelled after cars failed to arrive back in Leon on time having been stuck in traffic.

Despite those concerns, WRC teams gave their backing to the decision to visit the capital, saying the stage widened the event's appeal base.

"If this stage didn't happen then the rally was cancelled - we have to think about that," said Citroen team principal Yves Matton.

"I won't say we can't do this again - it's such a good opportunity.

"To have the chance to go to a place like Mexico City where you have 22 million people is the aim of what we are trying to do - to touch the people where they are living.

"Very few of the people from Mexico will be in Leon for the rally, so Mexico City makes it a huge interest for the manufacturers."

M-Sport's Malcolm Wilson added: "You've got to take your hat off to them for what they achieved in the timescale.

"Now it's a case of lessons learned, but I won't be critical of them in any way, shape or form."