The Citroen World Rally team has requested the FIA and Rally Argentina officials review onboard footage of the Cuchilla Nevada-Characato stage, suspecting some crews gained time by deviating from the route

Sebastien Ogier damaged the steering on his C3 WRC when he arrived at a junction that had been altered from the recce.

On the two practice runs at the stage taken earlier in the week, the right-hand side of the road had been closed off with a gate. The road book indicates the correct route is to the left of the closed gate.

When Ogier arrived, the gate to the right was open - offering two possible lines through the right-hand corner.

The WRC champion hesitated before following the correct route - that hesitation caused him to collide with a gatepost, damaging the power steering.

Citroen team principal Pierre Budar confirmed to Autosport that it had sought clarification of the line rival crews had taken.

Budar said: "It's not our job to check. We have seen on some videos two different lines, so it's now for the FIA or somebody to check what is the proper line to be followed.

"During the recce the gate [on the right] was closed and there was also a barrier - we know this because we checked from the recce video. 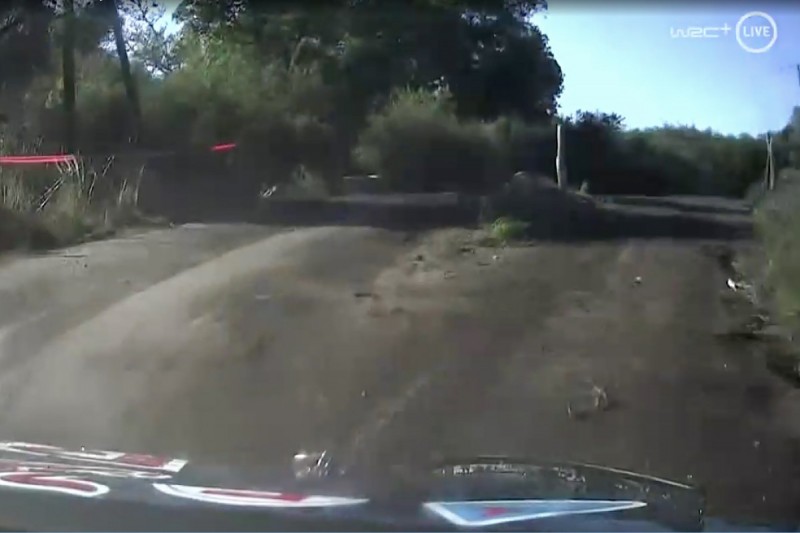 Ogier added: "We went to the left as we should, but we could see the line on the right side [of the gate, shown in the above picture from the WRC's All Live service].

"For the moment, we believe, the ones who didn't go [to the left] are going to have a problem because they didn't follow the road book.

"On the recce this side of the road was blocked, that's why I hesitated and then I hit the gate a little bit.

"It was really hard to drive the car without the power steering - these cars are made to use the power [assistance], they don't work without it. It wasn't good."

Ogier dropped 36 seconds to fastest man to Ott Tanak on SS11 and slipped from third to fourth place.

Autosport understands deviation from the route is something that would be dealt with by the event stewards in their meeting at the end of the day.