The pair had both been part of the team's semi-works programme this year as they were evaluated for the future.

Meeke will contest the full calendar of rallies next year, with Breen and Lefebvre alternating in a second car until a third C3 WRC comes online full-time - most likely in time for Rally Portugal in May.

A fourth car will be driven on a selected programme by Sheikh Khalid Al-Qassimi.

Breen, who will continue to be co-driven by Britain's Scott Martin, told Autosport the news still had not sunk in.

"We've been working on this for a few weeks, but I finally got confirmation during Corsica last weekend," he said.

"Honestly, when I got that piece of paper, I couldn't stop looking at it; I don't know how I got to sleep on Saturday night when I was told.

"This is all I've ever dreamed of."

As he finally secured a factory WRC deal, Breen also paid tribute to his previous co-driver Gareth 'Jaffa' Roberts, who died in a crash in 2012.

"This was what Jaffa and I worked so hard for," he said.

"I know he's going to be alongside me.

"It's still quite overwhelming, it's a red-letter day." 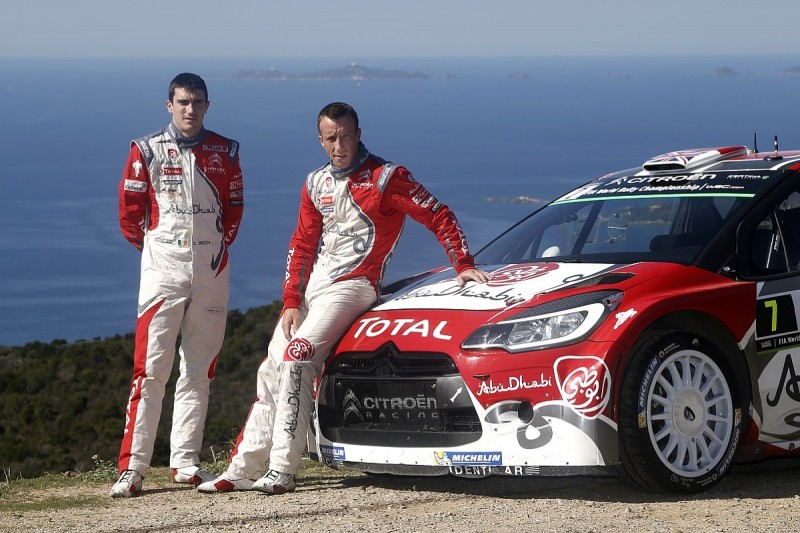 Citroen team principal Yves Matton admitted there had been numerous options for the squad next season, but in the end the approach and commitment from Breen and Lefebvre had impressed him enough.

"We had several scenarios regarding the choice of our crews for the future," he said.

"In choosing two young crews to complete the line-up with Kris, I don't think we can be accused of having gone for the easy option.

"But this original solution is very much aligned with Citroen's mindset.

"And having seen them compete this season for the Abu Dhabi Total WRT, we believe in the potential of Craig Breen and Stephane Lefebvre.

"They have the natural talent, motivation and work ethic to win rallies.

"I would also say we are proud to take these young drivers - who have been with the PSA Group for many years - up to the top level of the sport.

"At the start of the season, we'll have no choice but to have them take turns behind the wheel in the second Citroen C3 WRC.

However, as soon as possible, our three crews will be starting each round."

Meeke's three-year deal with Citroen was agreed at the end of last season, while Breen and Lefebvre's contracts run until the end of 2018.

Meeke, Breen and Al-Qassimi will drive the PH Sport Citroens at next week's Rally of Spain before Lefebvre returns for the first time after his Rally Germany crash to replace Al-Qassimi in Wales.

Further development testing of the C3 WRC is also ongoing, involving all the drivers.