Reigning World Rally champion Ott Tanak wants to be back in a Hyundai i20 Coupe WRC as soon as possible following his high-speed crash out of last week's Monte Carlo Rally.

Tanak - who won last year's WRC title with Toyota - switched to Hyundai for 2020, but crashed his i20 Coupe WRC out of the Monte Carlo Rally last week on Friday.

The accident happened on SS4, when Tanak and co-driver Martin Jarveoja were running third.

? Follow all the action as it happens #WRC Watch all stages of #RallyeMonte-Carlo live on https://t.co/0nWOJAkkTv

? #WRClive In case you missed it, see the whole Friday highlights on WRC+ pic.twitter.com/FMnm0eamOZ

The Hyundai left the road at 113mph and cartwheeled through a crash which lasted 14 seconds and ended with the car dropping 30 metres off a cliff.

Tanak and co-driver Martin Jarveoja were kept in hospital for surveillance overnight, but were given the all-clear and discharged on Saturday morning. They flew home to Estonia on Sunday.

"The biggest shame is that we couldn't spend too much time in the car," Tanak told Autosport.

"On the first evening I did not feel too good, but we improved the car overnight and already on Friday morning it felt better.

"But then the ride was cut a bit short.

"It was a proper accident.

"When the car was destroyed and it's not possible to continue, that means it was a good one.

"The safety equipment did its job, we're happy to be here."

Ott Tanak walked away from this terrifying crash in the Monte Carlo Rally without any injuries...#WRC drivers are a different breed ? pic.twitter.com/BzZ3s0NMoo

"Now it's a long break in, let's say, the Tarmac championship - the next one (asphalt round) is at the end of the year. Now we have to focus on the dirt."

Asked about the cause of the accident, he said: "We hit a bump that I didn't recognise in the recce and that sent us onto the wrong line, but it's never one thing.

"It was a combination of things that all together caused us to go off the road.

"As we know, accidents happen in motorsport, it's nothing new.

"Our plan is the same.

"This is a long season and it's time to fightback - we're fit and we're ready for that."

For the next event, Rally Sweden, Hyundai has confirmed that nine-time WRC champion Sebastien Loeb will be replaced by Craig Breen in the third i20 WRC. 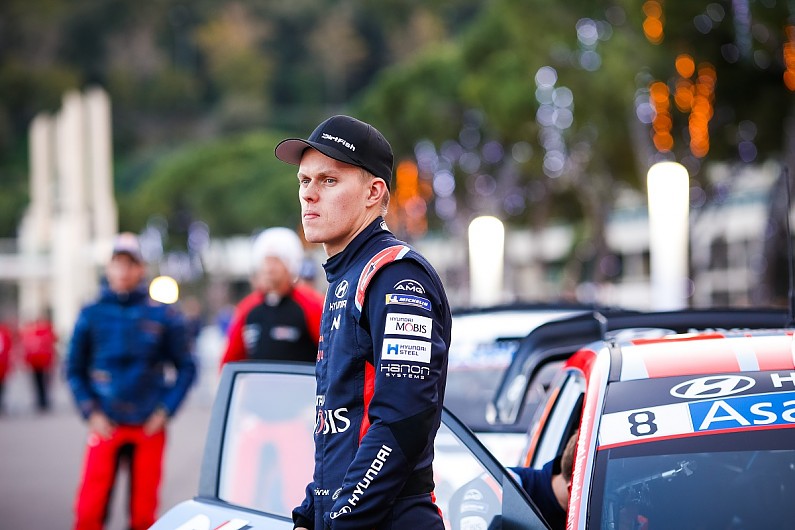