Citroen launched the Citroen Total Abu Dhabi World Rally Team at the Monte Carlo Beach resort, while Volkswagen pulled the covers off the WRC's latest challenger around the corner from the French Riviera.

Both events were deeply impressive in terms of 2013 potential and cash splashed. There's always loads of the former in the WRC, but there hasn't been much of the latter recently. A bit of extravagance never goes a miss, does it?

I know everybody carps on about how a VW Golf is just as at home outside a Hackney hairdresser's as it is the Hermitage Hotel, but, it also goes without saying, if you really wanted to make an impression you'd rock up in a Ferrari 458.

The irony there is that 458s and the like were being outshone left, right and centre in Casino Square last Saturday... by a Polo. That said, the Polo R WRC in question was probably the most valuable motor in the square last weekend.

Nouveau riche isn't quite right - the United Arab Emirates' wealth is arguably the oldest of the old, coming from a geological source: oil. The source might be old, but everything else in that part of the world looks pretty much brand new.

Prior to the launch, we stayed in the Yas Viceroy hotel, which sits neatly on top of Abu Dhabi's purpose-built Formula 1 track. Welcome to a perfect world where complete darkness is just the touch of a remote-control button away.

But beyond the glitz, glamour and all-round shininess of this part of the world, it's clear that not everything is for sale.

Citroen's DS3 WRC was revealed on the edge of a swimming pool at the Monte Carlo Beach. The original intention, I'm told, was to do the unveil on the beach. Unfortunately, such plans were scuppered as nesting turtles took precedence...

Talking to Citroen team principal Yves Matton - sporting his new Abu Dhabi-liveried shirt - in the sunshine, he's more relaxed than he's been for a while. Certainly more relaxed than in the summer when he and the rest of the Citroen Racing team stood on the edge of oblivion and faced the end of a glorious era in the wake of shocking car-sales figures.

Matton fought like hell, harder than probably any of us will every truly understand, to keep the programme running and here we are. Here we are sitting with the sun on our backs with a future that's looking equally bright.

Abu Dhabi's on board for the next three years, cementing Citroen's presence in the WRC until the end of 2015. Matton's earned his time in the sun.

And now maybe it's time for the WRC's moment in the sun.

Man alive, we've been through it, haven't we?

Did you see the story with Dietrich Mateschitz on AUTOSPORT's website last weekend? It was yet another shot in our collective arm. To paraphrase, Austria's most fevered fizzy-drink maker said it's time to take WRC from beneath the bushel, chuck a bit more wattage into its light and wake the world up to what we know.

Having come out of the perfect storm of manufacturers walking away, promoters going bankrupt and an apparently rudderless ship, we've sailed into the perfect form of a well-funded and massively respected promoter, manufacturers joining the party and a dedicated FIA department headed up by a Finn.

And if Finns know one thing, it's rallying. The Finn in question, Jarmo Mahonen, knows rallying better than most Finns.

Given that I'm more of a winter person, a skier more than a surfer, if you like, VW's unveil among the faux winter woods in Casino Square was a little bit more my cup of tea. It wasn't just the pretend snow that edged the real Emirati sand, it was the pure emotion of Monaco, the Hotel de Paris and all that goes with it.

For year after year, we stood and watched our season get underway at exactly this point. The crews posed for the season's group picture in the gardens outside the Sporting Club and then the cars started to roll over the ramp.

Since the switch to Valence, all that emotion and excitement has gone - the same ramp in the car park of an industrial town in the middle of France is never going to capture the same joie de vivre...

And when the VW arrived, it looked just as mean and purposeful as it had done when I saw it in testing, but clothed in the Red Bull livery, stage-set in all the right stickers, it looked gorgeous. But it wasn't just the car that intrigued and captivated in equal measure, it was another rally-knowing Finn who held the limelight longer than most last Saturday... Jari-Matti Latvala.

This was his first public showing as a VW driver - not that you'd have known it from his unbranded kit - but it was fascinating to see him deal with a very different team environment than he's known for his entire professional career. But he dealt with it tremendously well.

Leaving last week behind, two things struck me. The first is, as I said, I think we've found the right road at last. And the second thing is mirrors and the Middle East.

People of the Middle East: what is it about you and mirrors? Everywhere I went in Abu Dhabi last week, I seemed to be bumping into... myself (not an unheard of scenario in a confined space...). But this was ridiculous, there were mirrors reflecting mirrors and the worst of all was the hotel lift: nowhere to hide in there.

There's either a huge amount of vanity going on, or there's deep concern and fear of that unnoticed breakfast-down-the-front moment.

But enough of mirrors and enough of looking behind us. Last week was a good one for the WRC. It's onwards and upwards from here. 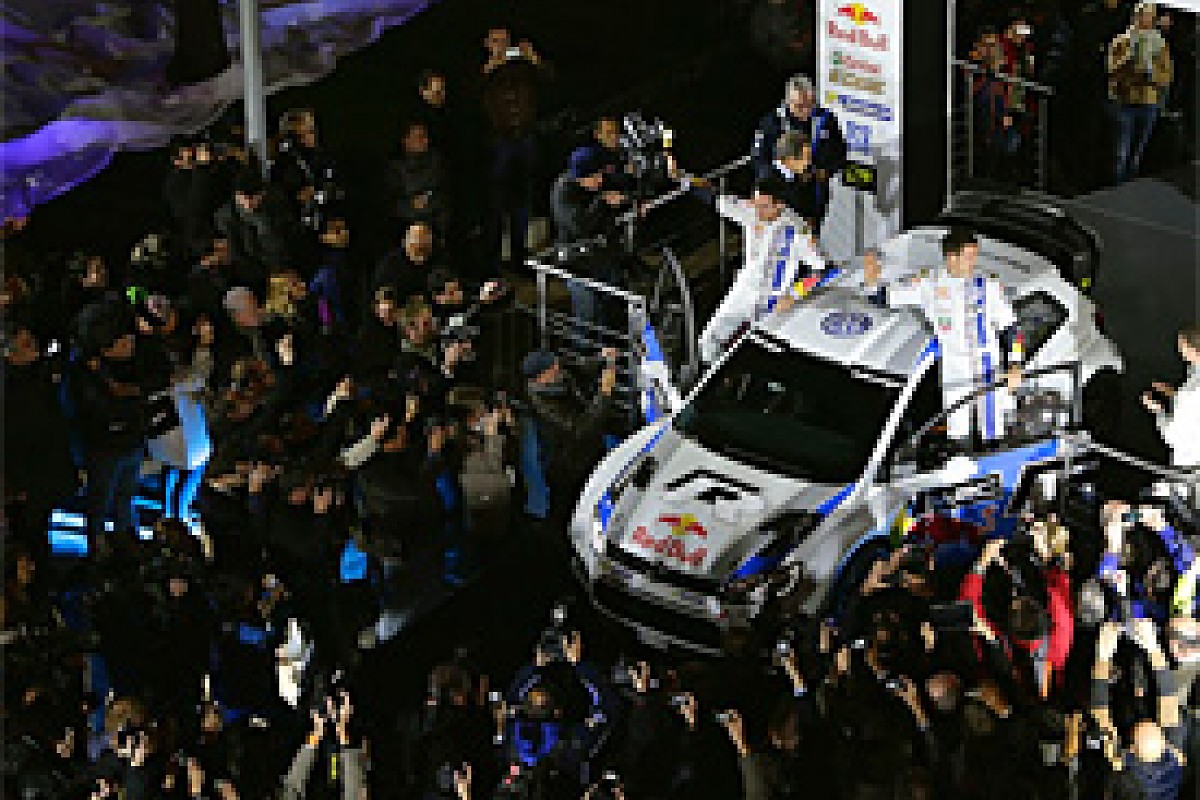