Volkswagen World Rallycross drivers Petter Solberg and Johan Kristoffersson dominated the first day at the German round of the series at Estering, taking a fastest time each in the first two qualifying sessions

Kristoffersson claimed the first race victory of the weekend in Q1 but his time was immediately bettered by Solberg, with the Norwegian sitting top of the pile at the end of the session.

With the start positions for Q2 dictated by the classifications from Q1, the team-mates started side-by-side in the final race of the day and it was Kristoffersson who made the best launch.

But, starting on the outside of Solberg's Polo, the now double champion had to pitch his car sideways into Turn 1 as the Estering circuit transitions from tarmac to gravel, the Swede not only executing an outside move on his colleague, but also forcing Audi driver Mattias Ekstrom wide in the process. 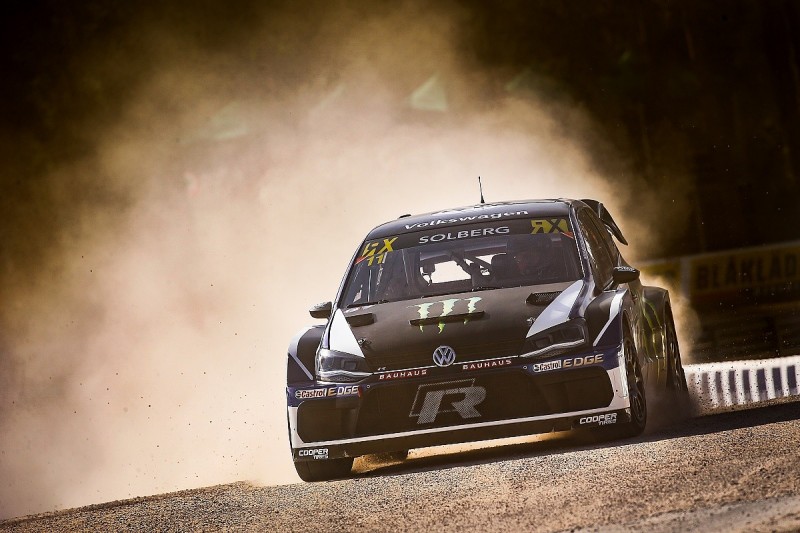 As Solberg hounded Kristoffersson, who has never finished on the podium at Estering, the race leader took his joker on lap three but, unsighted by hanging dust, Solberg ran wide at the same corner and lost time as he remained on the standard lap.

Kristoffersson was able to take his compulsory extra-route joker and maintain the lead, with Solberg having to take his joker on the final lap, and while he finished the race second, he dropped to third in the overall times behind compatriot Andreas Bakkerud.

Ekstrom's team-mate won his Q2 race by passing Peugeot driver Timmy Hansen when the Swede ran wide at the first corner on the third lap and is third at the end of day one, but it's Hansen's younger brother Kevin who sits just behind the leading trio.

The former European rallycross champion made the best launch from the fifth grid slot and won his race in Q1 to be third quickest, then was fifth in Q2, just behind his brother. Ekstrom splits the pair in the overnight top six.

While Euro RX Supercar driver Cyril Raymond spun at the first corner of his Q2 race and lost time, the only driver not to finish either session was Gronholm RX driver Timur Timerzyanov, who clipped a new for 2018 concrete wall in the joker lap section in Q2 and broke the steering on his WRC-derived Hyundai i20.