Audi driver Mattias Ekstrom finished first on the road at Barcelona to win the opening round of the World Rallycross Championship, only to be excluded after an incident with Petter Solberg

Lining up alongside top qualifier and semi-final one winner Solberg, Ekstrom gained a small margin on 2014 and '15 World RX champion in the run to Turn 1.

PSRX Volkswagen driver Solberg was then squeezed into the tyre wall on the inside of the circuit and into a spin.

As his team-mate Solberg crashed out of contention, reigning champion Johan Kristoffersson slotted into second in his Polo behind Ekstrom on lap one, followed by his EKS team-mate and squad newcomer Andreas Bakkerud.

Nine-time World Rally champion Sebastien Loeb was the first driver to take his compulsory joker lap at the first opportunity.

Up at the front Ekstrom posted the fastest lap of the weekend on lap one, and he and Kristoffersson extended a margin over Bakkerud in the opening phase of the race.

Pressured by Kristoffersson's Volkswagen Motorsport-built Polo, Ekstrom dived into the joker on lap five and slotted back into second ahead of Loeb, who at the same time leapfrogged Bakkerud for a podium place.

Having taken the lead, Kristoffersson pushed hard on the last tour in a bid to jump Ekstrom for victory, but when he exited the joker, Ekstrom narrowly retook the lead and defended the racing line to keep Kristoffersson at bay.

After Ekstrom's exclusion, each driver was promoted a place, while he wasn't classified. However, Ekstrom keeps his championship points earned in the races before the final. 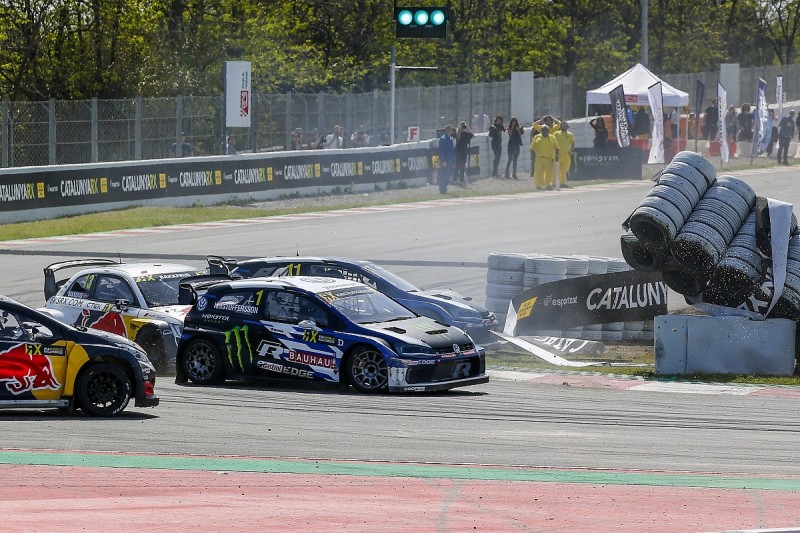 Loeb was promoted to second, ahead of Bakkerud. Niclas Gronholm made his second career World RX final on the debut of the GRX team's Hyundai i20 and was fourth. Solberg completed the race in fifth.

Ekstrom had been lucky to claim a front-row spot for the final. The WRX champion in 2016 had been fifth on lap one of semi-final two, the Swede sent his Audi S1 wide on the entry to Turn 1, as Timmy Hansen took the lead and Ekstrom lost out to the chasing gaggle of cars.

He fought back to run second in the latter stages of the race, but when Timmy Hansen's race-leading Peugeot slowed with an electrical problem, Ekstrom took the lead and victory to seal a front-row spot for the final Loeb sealed the podium spots with his Peugeot.

Loeb had only made it into the semi-finals by virtue of the Peugeot team withdrawing Kevin Hansen's car from 12th overall.

The Frenchman then finished second in semi-final two behind Ekstrom thanks to the demise of Timmy Hansen.