Volkswagen World Rallycross Championship drivers Petter Solberg and Johan Kristoffersson insist there is no conflict between them, despite first-corner incidents between the pair at the two most recent rounds

Kristoffersson's Polo R Supercar was thrown onto two wheels at the first corner of the final at Mettet in Belgium last month, following contact with Solberg's sister PSRX car, which forced him into the barrier.

Two weeks later, the pair made heavy wheel-to-wheel contact in the braking area for Turn 1 in the semi-final at Silverstone, sending world champion Kristoffersson's car hard into the inside tyre wall after his left-front wheel touched the right-rear of Solberg's Polo.

While Kristoffersson survived to win the restarted race and, later, the event to extend his championship lead, Solberg retired with transmission problems as a result of the contact.

"There's no issues," Solberg told Autosport when asked about the incidents ahead of this weekend's round at Hell.

"Johan is very professional and I'm professional, so for us there is nothing at all like that. Nobody does that on purpose in the team, there's no chance.

"Silverstone was just very unlucky to be honest, it happened so quickly. We will just try to be even more aware and a little bit more careful, I think that's the thing." 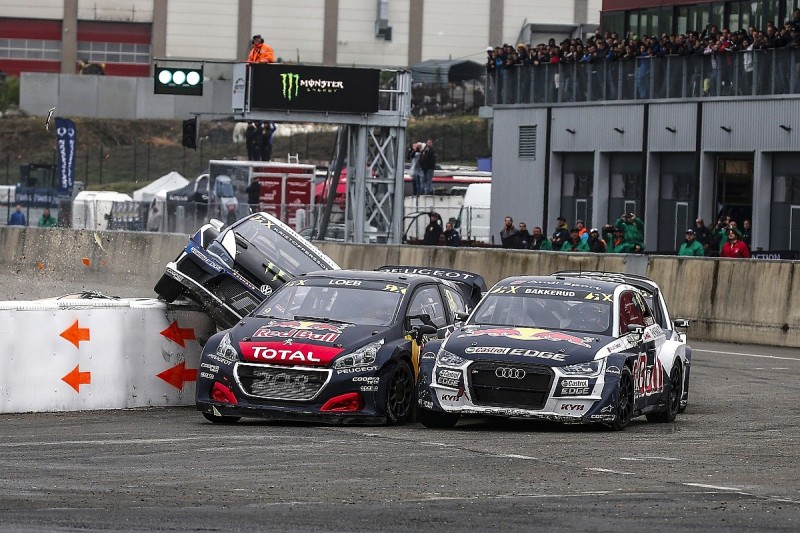 "Last year we were very, very strong and we didn't make contact any time; and over two years you will have a contact at one point.

"We will try in every possible way to avoid it happening again, it's just one of these things that happens.

"You always want the best for the team but sometimes you make things more complicated from trying to make a plan and stick with it.

"Sometimes it's just better to just let it happen, to let the racing sort itself out. When you have the time and possibilities to plan something, you will always try to do it but this time [at Silverstone] it didn't work out."

Solberg's squad was one of several teams to undertake testing between Silverstone and the Norwegian round this weekend.

The PSRX outfit tested at Strangnas in Sweden, that same venue that Mattias Ekstrom's EKS team used to work on developments for its Audi S1.

WRX Hell: Kristoffersson dominates for Volkswagen on day one