Sebastien Loeb holds ninth place after day one of the European Rallycross event at Loheac in France, as Fabien Pailler and title contender Timmy Hansen share the top spot

The event has produced an amazing atmosphere, with World Rally legend Sebastien Loeb unquestionably the star. Thousands of French fans eagerly await his every appearance, both on track and in the paddock.

Driving a Citroen DS3, Loeb had a hard race in heat one, finishing fourth with small mechanical problems, but fought back in heat two, winning his race and setting fifth fastest time to put himself ninth overnight.

"The second time was OK, but I had a problem with the diff in the first one," he said.

"I know it's important to be consistent, and that I am not allowed to do any more mistakes. I was happy with the setting of the car in heat two."

Leaders Pailler and Hansen both set a fastest and second fastest time in the heats.

"I'm really pleased with how the day has gone. Usually my first day isn't great but I have been working on that so it's really positive," said Hansen.

Winner of round six in Sweden, Andreas Bakkerud had a seventh time in heat one, but was on form in heat two - winning his race on track and setting fourth fastest time, to sit in fourth spot overnight.

Series regular Davy Jeanney hopes for great things from his home event. The ever consistent Citroen driver got in more on-track battles than usual and is fifth after two heats.

Winner in England and Finland, Tanner Foust has never been to Loheac before and is finding the French track a challenge to learn. 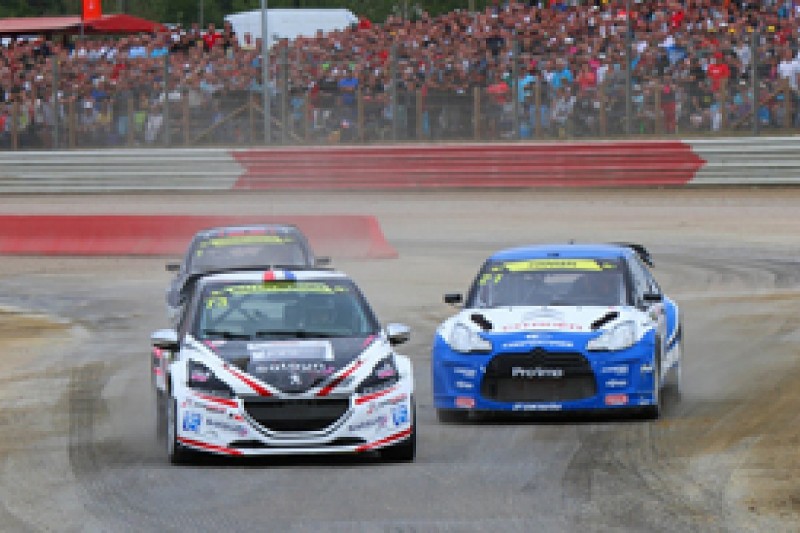 However a clean race in heat two gave him the eighth fastest time and sixth overnight.

British driver Liam Doran stalled on the startline of heat two and is 10th. Petter Solberg made the same mistake in the same race, and the pair had a battle of the starter motors to get on their way.

Solberg had earlier had a very close race with Hansen, just losing out to the young Swede in the last corners.

Kris Meeke also makes his rallycross debut at Loheac driving a Peugeot 208. The British WRC driver just lost out to fellow Brit Doran in heat one, before picking up a puncture through first corner contact in heat two. He finished the race, but with a slow time and as a result is 16th overall.