PSRX Volkswagen Sweden also claimed the teams' championship title, despite Kristoffersson's team-mate Petter Solberg crashing out of the event at the first corner of semi-final two and being taken to hospital for precautionary checks.

Solberg had started on the front row but was forced wide, hit the wall and stopped following further contact before the race was red-flagged.

Replicating his recent run of form, Kristoffersson made the best start in the final and led the race throughout.

He crossed the finish line 2.3 seconds ahead of outgoing champion Mattias Ekstrom, before heading into a series of celebratory doughnuts with the dominant Volkswagen Motorsport-built Polo GTi Supercar. 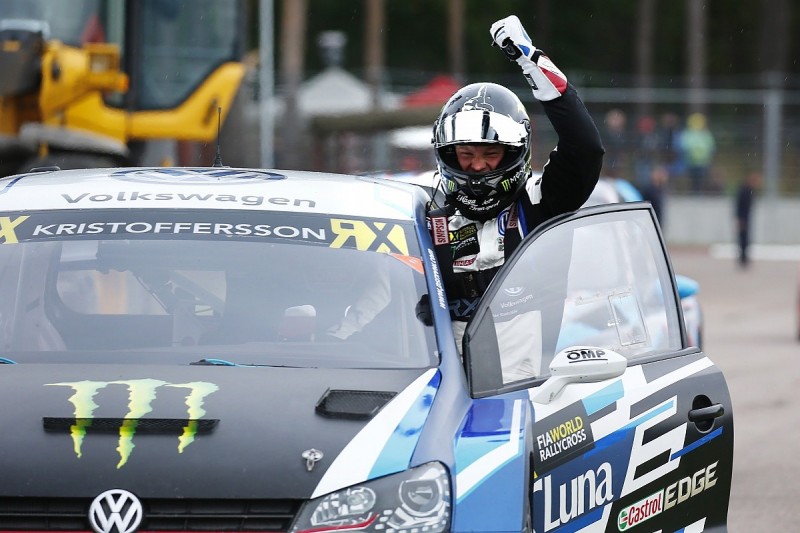 Home hero Janis Baumanis climbed from sixth on the grid to be second after the left-right first corner sequence, capitalising on the inside of the left and outside of the right when Ekstrom and front row man Sebastien Loeb ran side-by-side to Turn 1.

While Loeb was forced wide and dropped back, Ekstrom quickly repassed Baumanis into Turn 3 and then pulled clear to secure second.

Loeb tried to recover with an early joker at the end of the first lap. Though he was able to jump back to third as others took the extra route, he could get no higher.

Andreas Bakkerud made a slow launch from the back row of the grid but was able to overcome Baumanis and DTM driver Nico Muller to take fourth.

Muller reached the final in only his second World RX event and started on row two alongside his Audi DTM team-mate Ekstrom.