Solberg's points tally was sufficient for him to wrap up the title - his first since the 2003 World Rally Championship crown - even with two rounds remaining.

The event itself was won by Hansen, who topped the intermediate classification and his semi-final heat before emerging victorious in the final to score Team Peugeot-Hansen's first victory with its Peugeot 208.

Joined on the front row by team-mate Timur Timerzyanov, Hansen made the best start to lead into Turn 1.

Hounded by Solberg, second-placed Timerzyanov picked up a puncture at the end of the first lap, putting him out of the running.

Solberg took his joker on lap two and returned to the main field just ahead of Supercar debutant Ricahrd Goransson, who had headed for his joker after the opening lap.

As at previous events in Belgium and Canada, Solberg then broke the rear suspension on his Citroen DS3 after a heavy landing over a jump, and Goransson passed the Norwegian at the end of lap three. 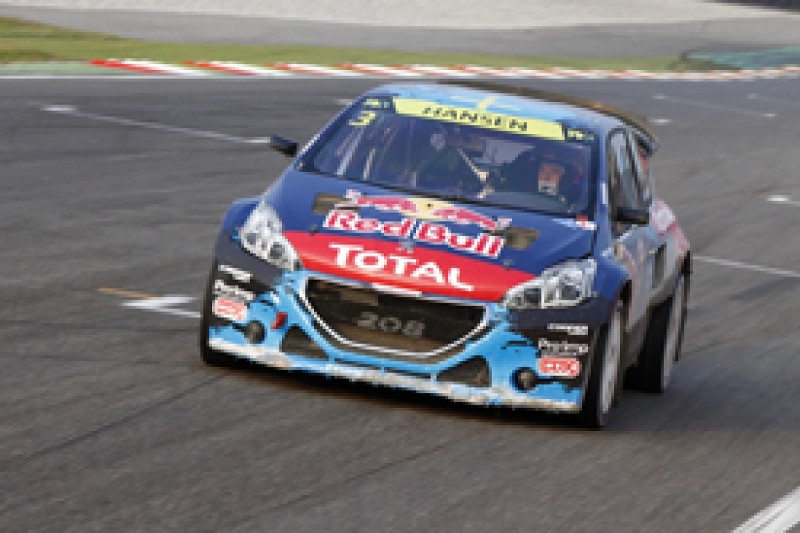 Solberg needed to finish on the podium to clinch the title, and was helped by early retirements for both Johan Kristoffersson and Andreas Bakkerud.

With only three cars left running at speed, Solberg was able to play it safe and reached the finish in the third position he required.

Ahead, Hansen cruised to his first victory in the series, while Scandinavian Touring Car Championship frontrunner Goransson finished second.

Title contenders Reinis Nitiss and Toomas Heikkinen both made it to the semi-final stages but neither was able to progress to the final and take the battle to Solberg to the next round in Turkey.

Ex-World Rally Championship driver Gigi Galli just missed out on a place in the final on his rallycross debut. He finished fourth in semi-final one.