F1 convert Button still has 'no idea' about rallycross after test

The 2009 F1 world champion has long cited rallycross - the discipline in which his father John competed - as a career ambition.

Button said last year that America's Global Rallycross Championship and Super GT's Suzuka 1000kms were his most likely race possibilities for 2017 now he has stepped down from his McLaren F1 race seat.

But he conceded his test in OlsbergMSE's Honda Civic GRC car in Florida last week had been an eye-opener.

"I want to have a bit more of a relaxed year, on my terms," said Button.

"I'd love to race in something - there's a good chance I'll do Super GT, one race in Japan at Suzuka. And I'd like to do some rallycross.

"But there is so much I've got to learn. The stuff that's on the concrete, I can deal with, but as soon as you get onto that dirty stuff - I have no idea!

"It was a great experience, and hopefully in the future, yeah, I'd love to race. But there's so much to learn.

"But that makes it so exciting, that's why I stayed in F1 - because there's always more to learn. Hopefully it's the same with rallycross." 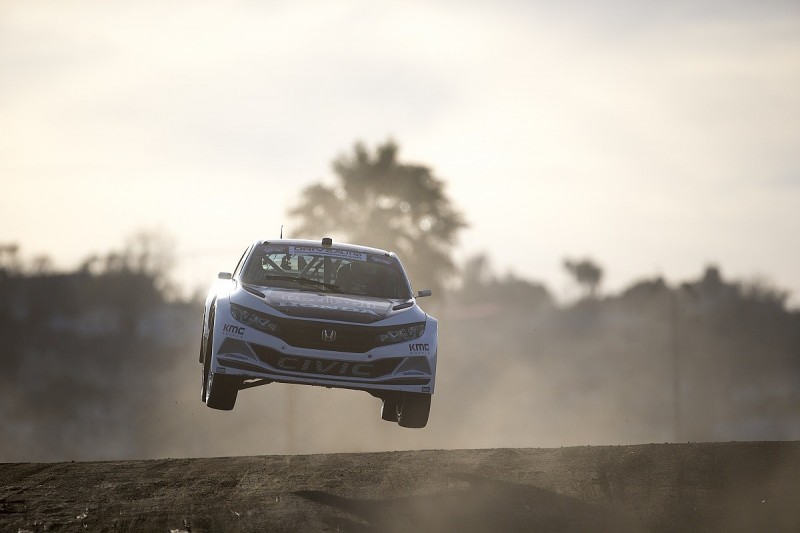 Button also joked that the rallycross test had just been practice for the weekend's Race of Champions in Miami, where the machinery included cars from the GRC's supporting Supercar Lites category.

He reached the quarter-final stage of the individual RoC competition before being eliminated by nine-time Le Mans 24 Hours winner Tom Kristensen.

Button had previously tested rallycross machinery for a BBC television feature in 2015, when he drove both the JRM Mini World Rallycross car and a classic Volkswagen Beetle at Lydden Hill with David Coulthard alongside him.

"I've never seen anyone so scared in my entire life as [Coulthard] sat next to me in a 600-horsepower, two-wheel drive VW Beetle in the wet at Lydden Hill," Button added.