Solberg continued his Saturday form into the final day by setting the fastest time in Q3.

Track conditions improved throughout under baking sunshine, meaning Solberg's winning time from the final heat was 10.621 seconds up on the previous best time set by Niclas Gronholm in the third race.

Solberg then led the final race of Q4 before narrowly missing out on victory to Timmy Hansen's superior joker-lap strategy, with second-fastest time giving the PSRX Volkswagen driver top spot overall heading into the semi-finals. 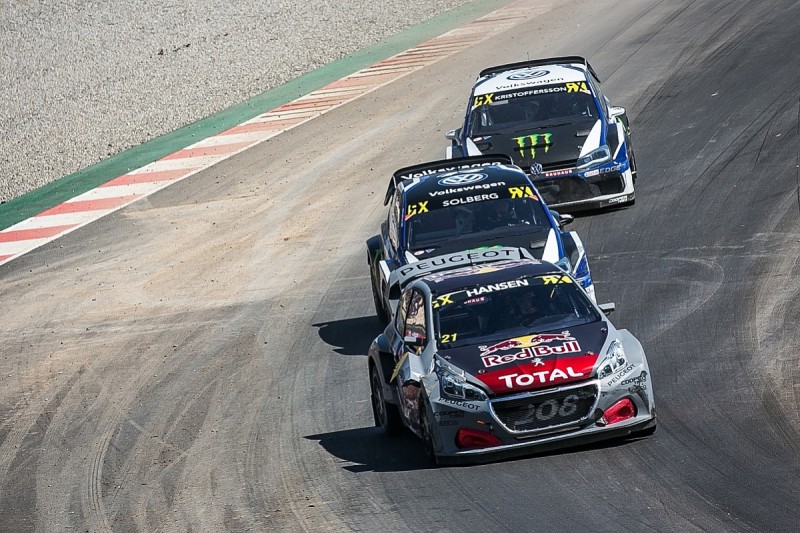 For the second year in succession at Barcelona, Loeb's difficult opening day continued into Q3 on day two.

Loeb was beaten to Turn 1 in his Q3 race by Kevin Eriksson, who then ran wide at Turn 2. As Loeb tried to repass on the inside, his Peugeot's left-rear wheel made contact with Eriksson's OlsbergsMSE Ford - breaking the suspension and putting him out.

The pair met again in the first race of Q4 but despite finishing first and second on track, and eighth and 10th in the overall Q4 times, neither made the semi-final cut in 13th and 14th in the combined rankings from all qualifying heats.

Reigning champion Johan Kristoffersson and Andreas Bakkerud came together in both the Q3 and Q4 races on Sunday morning - with Hansen and Solberg also caught up in the latter incident but escaping unscathed.

Audi driver Mattias Ekstrom finished second to a rejuvenated Gronholm in their Q3 race, with Gronholm ending qualifying sixth overall on the debut for his father Marcus's GRX team's WRC-derived Hyundai i20 Supercar.

Ekstrom and new EKS team-mate Bakkerud were fourth and fifth in the Intermediate standings ahead of Gronholm.

On the debut of the GCK team's Prodrive-built Renault Megane RS RX, both Jerome Grosset-Janin and Guerlain Chicherit made it into the semi-finals in 10th and 11th.