Conway's best time of 1m39.916s in the #7 Toyota TS050 Hybrid came shortly after the first red flag period, caused by Bruno Senna's heavy crash at Copse in the #1 Rebellion R-13.

Senna was reportedly able to get out of the car unaided but was taken to the medical centre for checks.

After a half-hour delay, the session resumed with 15 minutes added to make up for the lost running, but a second stoppage was caused when the ByKolles ENSO CLM P1/01 dumped oil on track at the Loop.

Sebastien Buemi set the best time in the Le Mans 24 Hours-winning #8 Toyota he shares with Fernando Alonso and Kazuki Nakajima, a 1m40.191s lap, in the early part of the session to make it a one-two for the Japanese marque.

Best of the LMP1 privateers was the #3 Rebellion with Gustavo Menezes posting the car's best effort, which was 1.027s adrift of Conway.

The stricken #1 car driven by Senna was 3.2s off the pace in fourth shortly before his accident.

One-time Formula 1 world champion Jenson Button was quickest of the SMP Racing drivers and set a 1m40.176s lap in the #11 BR Engineering BR1, which is running in high-downforce spec for the first time this season.

Egor Orudzhev was sixth in the #17 BR1 ahead of Ben Hanley in the #10 DragonSpeed BR1 and Oliver Webb in the #4 ENSO CLM before its problems. 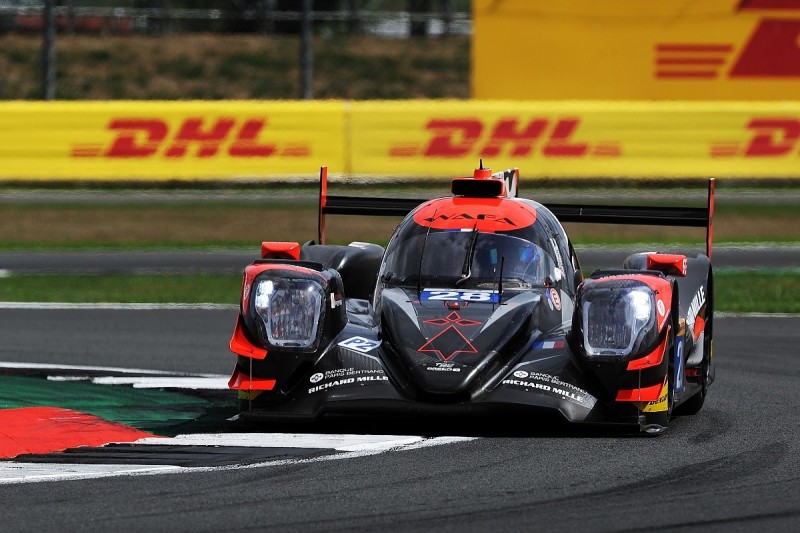 LMP2 was led by Audi DTM driver Loic Duval, who set a 1m46.122s lap in the #28 TDS Racing ORECA to go seven tenths clear of the opposition led by GP3 racer Gabriel Aubry in the #38 Jackie Chan DC Racing car.

Third in class was the points-leading #36 Signatech Alpine with Andre Negrao at the wheel.

Ford's pair of Chip Ganassi Racing-run GTs led the way in GTE Pro, with Olivier Pla setting the best time in class with a 1m57.166s lap shortly after the first red flag to put the #66 car ahead of Andy Priaulx's #67 machine by 0.671s.

Third was the quicker of the two Porsches, the #91 machine of Gianmaria Bruni, followed by the #51 Ferrari 488 GTE.

Fresh from a Balance of Performance boost in the run-up to Silverstone, Aston Martin's two Vantage GTEs were sixth and seventh-fastest, while the two MTEK-run BMW M8 GTEs brought up the rear in ninth and 10th.

Porsche held sway in GTE Am with Matteo Cairoli setting the best lap of 1m59.418s in the #88 Dempsey-Proton car.