Mike Conway ended his spell in the #7 car after almost two and a half hours and his Toyota team's stop to place Lopez in the car was almost eight seconds quicker than Sebastien Buemi's handover to McLaren Formula 1 driver Alonso.

Alonso was able to consistently take time out of Lopez - notably lapping three seconds quicker than the Argentinian late in the hour - but remained just under four seconds adrift of the leader.

SMP Racing's Stephane Sarrazin ran the longest stint of the LMP1 class so far after a long-running duel with #1 Rebellion driver Thomas Laurent, but that came to an end when the pair finished their runs.

Rebellion now holds the edge with Mathias Beche in third taking over from Laurent with Sarrazin's replacement Egor Orudzhev now in fourth aboard the #17 BR1.

The second Rebellion machine of Bruno Senna is fifth after he made quick work of DragonSpeed's Henrik Hedman after Ben Hanley had worked the BR1 back into the lead pack following his lap one contact.

Hedman stopped close to the end of the hour after losing swathes of time to Senna.

Tom Dillmann's climb through the LMP2 field to return the ByKolles machine to fringes of the leading LMP1 cars continued in the hands of Dominik Kraihamer in ninth overall behind two LMP2 machines with over two minutes to make up to Hedman.

The Manor-Ginettas are still some distance behind the LMP1 contenders, with Oliver Rowland's #6 car ahead of the #5 driven by Leo Roussel in 15th and 20th overall respectively.

G-Drive pulling away in LMP2

Andrea Pizzitola has extended the lead of the #26 G-Drive Racing ORECA to over a minute after taking over from Jean-Eric Vergne. 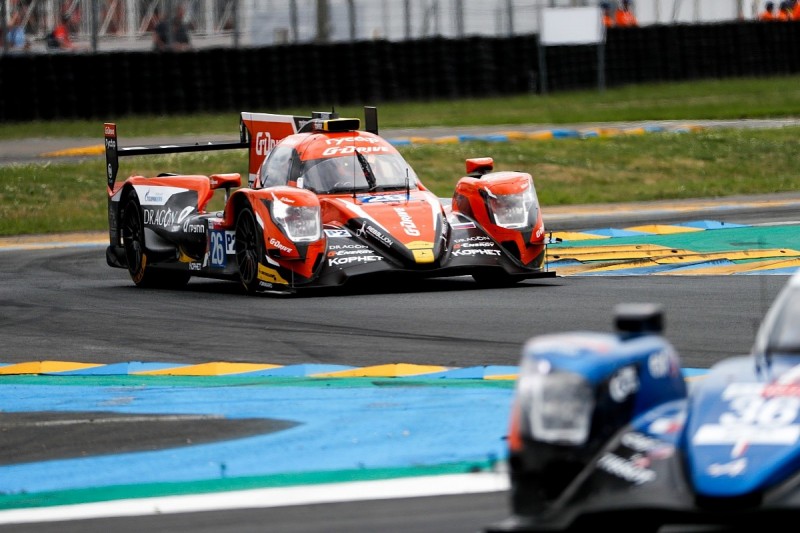 Vergne had 54 seconds in hand over the #28 TDS Racing ORECA of Loic Duval when the latter pitted on lap 38 to hand over to gentleman co-driver Francois Perrodo.

Pizzitola emerged still in the lead when he took over from Vergne one lap later and had extended his advantage to 1m16s by lap 47, as Perrodo slipped down to fourth behind Andre Negrao's #36 Signatech-Alpine and the #23 Panis-Barthez Competition Ligier driven by Julien Canal.

Only eight cars are still on the lead lap, with Lafargue the first car one lap down.

Further cars to hit trouble included the #22 United Autosports Ligier, which had been a fixture inside the top 10 in the hands of Filipe Albuquerque before a seven-minute stop to repair the car's GPS tracking unit dropped it two laps down.

Phil Hanson is now at the wheel and running in 15th position.

Porsche continues to control the GTE Pro class, but its two retro-liveried cars have swapped positions, with the Rothmans-coloured #91 car retaking the lead.

Frederic Makowiecki closed down team-mate Laurens Vanthoor after having passed Sebastien Bourdais' Ford at the tail end of the second hour, and took the class lead just before Vanthoor peeled in for the #92's third stop of the race.

After pitting the next time by, Makowiecki held on to his advantage, and at the end of the hour the Frenchman was ahead of the 'Pink Pig' sister car by just two tenths.

Bourdais maintained third place in the #68 Ford, five seconds behind, while Nick Tandy moved up to fourth place in the leading IMSA CORE autosport-run Porsche, the #93 car.

Olivier Pla ran fifth in the #66 Ford, while Augusto Farfus (#82 BMW) and Richard Westbrook (#69 Ford) were fighting over sixth position, the Brazilian having nosed ahead just before the top of the hour.

In GTE Am, Julian Andlauer held a comfortable 30s lead in the #88 Dempsey-Proton Porsche after passing Thomas Flohr's #54 Spirit of Race Ferrari.

Bronze-rated Flohr inherited a big lead after the #54 crew benefitted from making a pitstop during a Slow Zone, but couldn't maintain the pace set by Andlauer or Cooper MacNeil in the #84 JMW Ferrari, ultimately dropping behind both.

MacNeil was 33 seconds behind Andlauer and 27 seconds clear of Giorgio Roda in the second Dempsey-Proton Porsche, which also passed Flohr before the end of the hour.