Both leading Audis suffered turbo dramas on Sunday morning, which handed Porsche's #20 car of Mark Webber, Brendon Hartley and Timo Bernhard an opportunity to fight for victory, putting the 919 Hybrid into the lead with just three hours to go.

But the #20 car was no match for the pace of a recovering Lotterer in the #2 Audi, and the R18 e-tron quattro had already taken the lead when Webber slowed from second towards the end of the 22nd hour.

The Porsche's problems allowed the #1 Audi, in which Kristensen had appeared to be en route to a 10th Le Mans as the race passed the 20 hour mark before requiring a turbo change, to recover to second place, three laps down.

The #8 Toyota crew of Anthony Davidson, Nicolas Lapierre and Sebastien Buemi salvaged an unlikely podium finish once both Porsches (#14 stopping late-on with a gearbox problem, but rejoining to take the chequered flag) were forced into the garage, but that was scant reward for a race that the Japanese manufacturer controlled for more than half of its duration.

While the #8 car was ruled out of contention for victory when Lapierre crashed heavily during a rain storm early on (an incident that also accounted for the retirement of the third Audi with Marco Bonanomi at the wheel), the polesitting #7 car was seemingly unassailable out front.

The #2 Audi put up a fight to the leading Toyota during the night, but the gap was always above one minute.

Nakajima, having taken over from Stephane Sarrazin, was extending the lead early into his stint when the TS040 HYBRID stopped on track with an electrical problem - robbing Toyota of the victory it desperately craved. 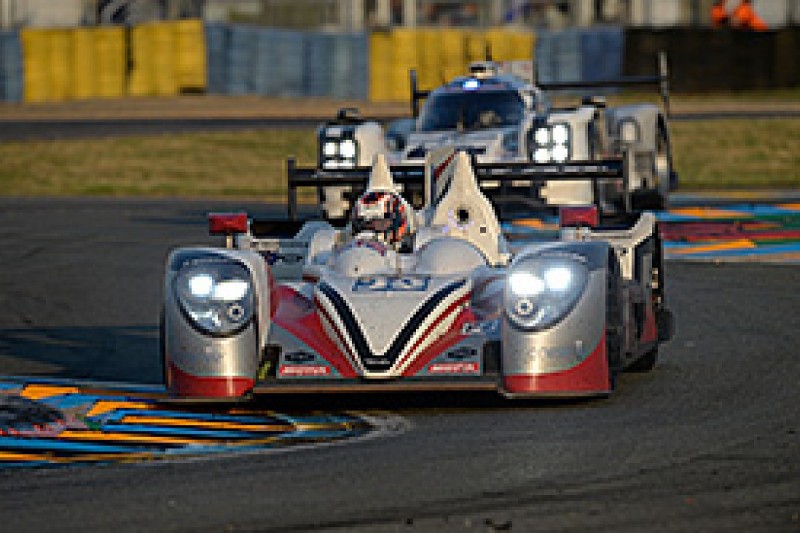 Harry Tincknell, sharing with Simon Dolan and Oliver Turvey, had led the class early on after passing the polesitting #46 TDS Ligier but the car fell down the class order during the rain-induced early chaos.

But as the race progressed, it recovered and with Turvey at the wheel, jumped the Ligier at the penultimate pitstop.

Tristan Gommendy had led LMP2 heading into the final hour, but TDS had to pit for new tyres and a driver change at its penultimate stop having earlier lost time in the 21st hour with a puncture and resulting suspension damage.

When Turvey made his stop, he did not have to take tyres and continued in the car, emerging just ahead of the Ligier now driven by Ludovic Badey.

Although Badey had a tyre advantage, Turvey pulled away and never looked like losing victory.

The #36 Signatech Alpine ORECA of Nelson Panciatici, Paul-Loup Chatin and Oliver Webb finished third and spent time in the class lead, but lost time after suffering a front-left upright failure.

But the G-Drive-branded, OAK Racing-run #35 Ligier was the star turn in LMP2, leading the race and building up a comfortable lead before losing time first with a broken rear brake disc and then a loss of power.

The car, driven by Alex Brundle, Jann Mardenborough and Mark Shultzhitskiy, had salvaged fourth place but a late puncture meant it dropped to fifth behind the #24 Sebastien Loeb Racing ORECA.

The #47 KCMG ORECA climbed from seventh on the grid to lead during the first stint in the hands of Alexandre Imperatori.

After losing time with an off during the early-race rain when Richard Bradley aquaplaned off and hit a stack of tyres, the car crashed on the run out of the Porsche Curves as a result of a driveshaft failure.

The #48 Murphy Prototypes ORECA also showed strongly, but Karun Chandok aquaplaned off on the Mulsanne Straight in the rain and was collected by the #41 Greaves Zytek and later retired from the race with a steering problem. 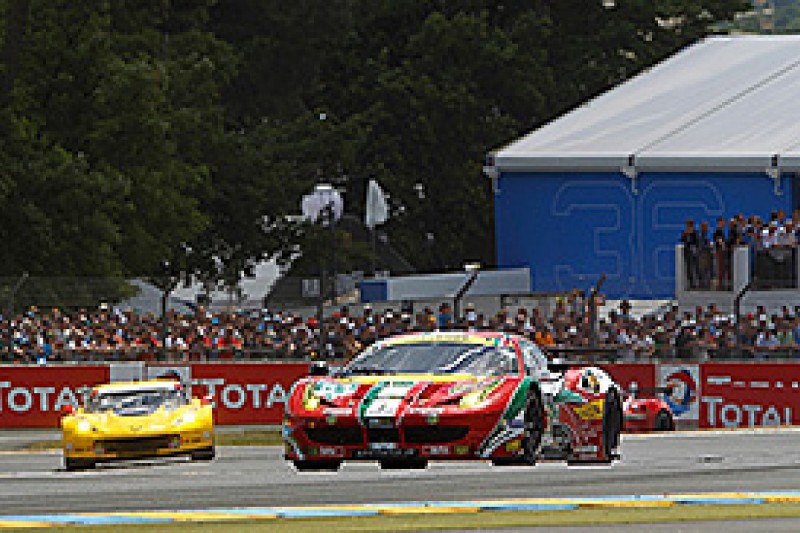 The AF Corse Ferrari of Giancarlo Fisichella, Gianmaria Bruni and Toni Vilander took a comfortable victory in the GTE category, after its early rivals faltered.

Bruni, who had qualified the 458 Italia on pole, crossed the line two laps clear of the leading Corvette C7.R, which overcame a safety car delay and a broken air jack in the pits to defeat the leading Manthey Porsche in the fight for second.

Frederic Makowiecki held the place in the closing stages in the #92 911 RSR he shared with Marco Holzer and Richard Lietz, but was delayed in his penultimate pitstop and dropped behind the Antonio Garcia/Jan Magnussen/Jordan Taylor #73 C7.R.

The sister Corvette finished fourth, frustrated after its early challenge for the lead in the hands of Oliver Gavin, Richard Westbrook and Tommy Milner was derailed by overnight alternator issues.

A power steering hose issue helped consign the long-time race leading Vantage of Darren Turner, Stefan Mucke and Bruno Senna to 19th overall in GTE, 27 laps down on the winning Ferrari, but AMR's #95 car claimed the spoils in GTE Am.

Aston had looked set for a one-two in the Pro-Am division, with Paul Dalla Lana, Pedro Lamy and Christoffer Nygaard making the early running in the #98 car.

When their car was hit by the same power-steering issues that afflicted the Pro entry, the #95 car - which comprised Kristian Poulsen, David Heinemeier-Hansson and Nicki Thiim - moved ahead, surviving a late power issue and brief spell in the garage to comfortably defeat the #88 Proton Competition Porsche and #61 AF Ferrari.