Onboard footage suggested that Lopez was stuck in third gear going down the Mulsanne straight, having been over two minutes clear of the other Toyota the lap prior.

Lopez brought the car into the pits at the end of the lap, limping for the majority of the eight-mile circuit, and handed the lead to Nakajima.

Lopez had already served what was likely to be the penultimate stop for the Toyota near the close of the hour, stopping ahead of the #8 in what has been the conventional strategy for the team.

Nakajima will take the #8 Toyota to the flag after taking over from two-time Formula 1 champion Fernando Alonso following the completion of his final stint.

Behind the two Toyotas, the #11 SMP Racing BRE-AER BR1 of Stoffel Vandoorne continued to run in an unchallenged third place and three laps ahead of the nearest car.

Bruno Senna and Gustavo Menezes climbed into the Rebellion-Gibson R-13s in the penultimate hour and ran fourth and fifth respectively, albeit with five laps between them.

Signatech-Alpine continued to lead the LMP2 class with one hour to go, although Ho-Pin Tung's chasing Jackie Chan DC Racing ORECA had got itself back onto the lead lap.

Pierre Thiriet took over from Andre Negrao with 75 minutes to go, and ceded the car's one lap advantage, but was still over 3m20s ahead at the hour mark.

Poleman Loic Duval had taken over the #28 TDS Racing ORECA from Matthieu Vaxiviere and consolidated his third place, one lap ahead of the continuing battle for fourth between the #22 United Autosports Ligier and #30 Duqueine Engineering ORECA.

Phil Hanson had an 18s advantage over Nico Jamin at the close of the hour after they took over from Paul di Resta and Pierre Ragues respectively, but Jamin was beginning to close.

Meanwhile, the #29 Racing Team Nederland Dallara that Nyck de Vries crashed at Indianapolis in hour 21 returned to the track, but suffered a left-rear puncture on the Mulsanne with Giedo van der Garde at the wheel.

The former Caterham Formula 1 racer nursed the car that ran third in the early stages back to the pits, where it has remained ever since.

GTE - Ferrari on the cusp of win

Ferrari remained on course for GTE Pro honours with an hour to go, with Alessandro Pier Guidi tasked to take the #51 AF Corse-run 488 GTE to the flag.

Pier Guidi took over from Daniel Serra in the penultimate hour, and was 55 seconds clear of Gianmaria Bruni in the #91 Porsche.

Earl Bamber was 1m40s off the lead in the third-placed #93 Porsche, while the final car on the lead lap was the best of the Fords - the #68 machine of Joey Hand. 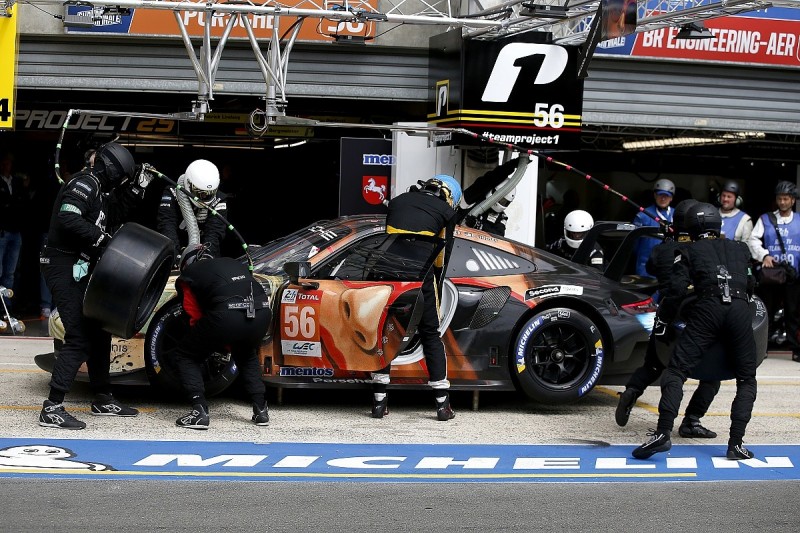 There was drama in GTE Am as long-time leader Keating Motorsports picked up a stop-and-go penalty for spinning its wheels in the pitlane.

Ben Keating had already been considerable closed down by Jorg Bergmeister in the Project 1 Porsche (pictured above), the pair split by around 40s when the Texan earned the penalty.

When Keating returned to the track in the #85 Ford GT, he was just five seconds ahead of Bergmeister, while Rodrigo Baptista was another 1m30s down in the JMW Motorsport Ferrari in third place.