When Mike Conway pitted from the lead, his advantage over the sister #8 car was just two seconds but pole lap record-holder Kobayashi has now extended that to 31 seconds.

Anthony Davidson, replacing Sebastien Buemi in the #8, has started to drop back into the clutches of the top Porsche of Nick Tandy, having been unable to consistently match the pace of the leading car.

The #2 Porsche remains fourth around half a minute ahead of the final Toyota.

LMP2: REBELLION STAYS AHEAD WITH #13 CAR 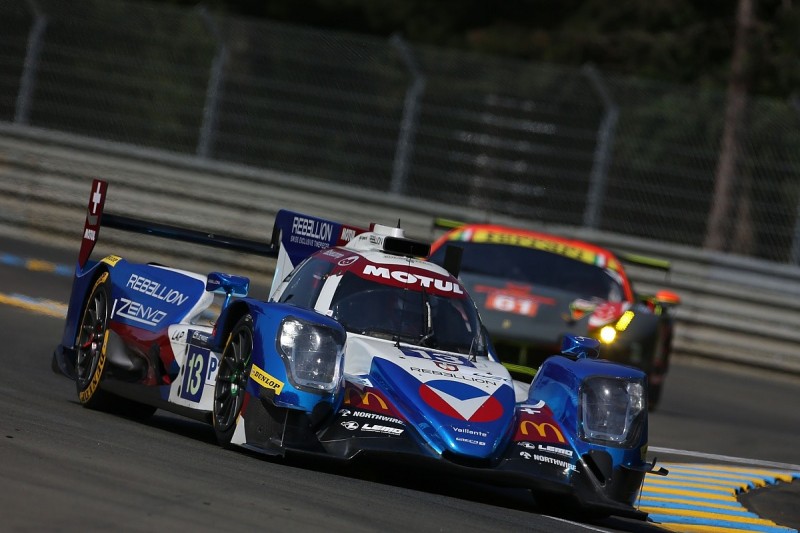 Mathias Beche, driving the #13 Rebellion, chased down and passed the sister #31 car of Nicolas Prost to take the lead with just over 10 minutes of the hour remaining.

Prost appeared to struggle in traffic, and the lead that was 21s over his team-mate when the pair started their respective stints was gradually whittled away.

Beche quickly extended that lead to around five seconds as the pitstop phase began just before the hour mark.

Thomas Laurent, driving the #38 Jackie Chan DC Racing ORECA, had closed to just six seconds off the leading duo, but he went straight on at the second part of Indianapolis and lightly struck the barrier.

He recovered to the pits for a nose change, but rejoined almost two-and-a-half minutes down - but still in sixth place.

Jean-Eric Vergne ran fourth in the #24 Manor ORECA that he has been in since the start of the race, the consequence of the team making an early change of tyres when concerning wear was spotted.

He runs 20s ahead of team-mate Simon Trummer, who runs fifth in the #25 car.

At the end of the hour, Ben Keating had a high-speed spin at the Dunlop Esses while attempting to pass the GTE Pro Porsche of Richard Lietz, but avoided major damage and was able to get back to the pits. Aston Martin's two factory entries continue to lead GTE Pro, having repelled a challenge from Porsche during the third hour.

Marco Sorensen led throughout in the #95 Vantage, while Daniel Serra had to fight past Michael Christensen's #92 Porsche to reclaim second place after losing out during the pitstop in which he took over the #97 car from Darren Turner.

Behind them, Harry Tincknell led the chasing pack in the #67 Ford before he and Christensen became the first of the frontrunning group to pit, 15 minutes before the turn of the hour, enabling the out-of-sequence #66 Ford of Olivier Pla to inherit third.

Tincknell then bullied his way past at Arnage to claim fourth place from Christensen.

The fastest of the Ferraris, James Calado in the #51 AF Corse 488, is just over seven seconds further back in sixth.

Porsche's other car is now running at the back of the class after a clash with the Keating LMP2 entry at the Dunlop chicane.

An Aston Martin also leads GTE Am in the hands of Paul Dalla Lana, who passed William Sweedler's Ferrari 488 early in the hour and now has nearly 30s in hand over Dries Vanthoor in the #84 Ferrari, who also passed the American.